One facility is going up; another nearly complete 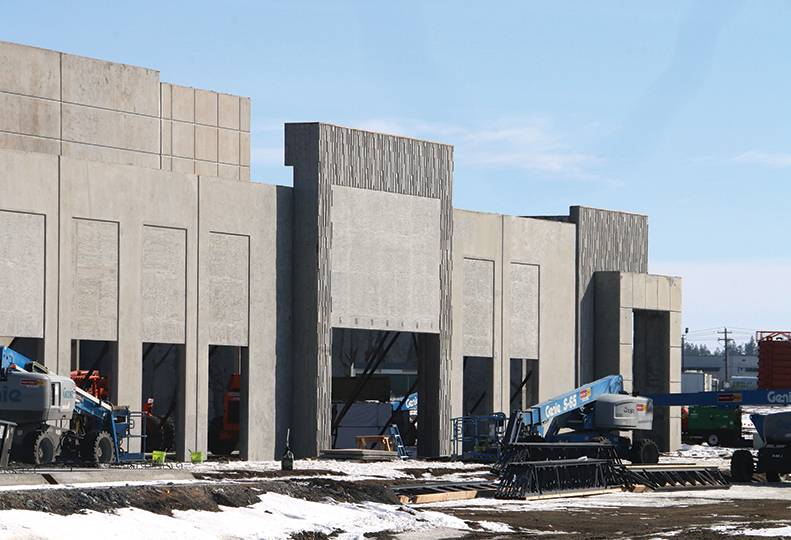 -Mike McLean
This 280,000-square-foot warehouse structure is rising near Amazon.com’s big distribution center on the West Plains and is widely believed to be another Amazon facility.

Amazon.com Inc. continues to expand its presence in the Spokane area with two current projects having a total construction value of $56 million underway on the West Plains.

A nearly 280,000-square-foot structure widely presumed to be an Amazon sorting facility is going up at 6125 S. Hayford Road, next to the megaretailer’s massive fulfillment center, although the company hasn’t yet confirmed it’s behind the new development, code-named Project Gray.

A building permit application submitted by Columbus, Ohio-based Ford & Associates Architects Inc., which has ties to Amazon, shows a construction value of $23.6 million for the structure.

The Renton, Washington, office of Panattoni Development Co. is developing the project, and Perlo Construction LLC, of Tualatin, Oregon, is the contractor. The companies have developed and constructed similar facilities for Amazon.

Construction is expected to be completed this year, and the facility will have about 700 employees, according to environmental planning documents.

The structure will be Amazon’s sixth major facility in the Spokane area.

Separately, construction and associated tenant improvements with a total value of $30 million are nearly complete at a 187,000-square-foot building at 12315 W. McFarlane Road, on the west edge of Airway Heights that will be an Amazon last-mile delivery facility. The building is the first structure erected in the McFarlane Industrial Park, which is being developed by Spokane Valley-based AT Acquisitions LLC.

Amazon has said it intends to hire hundreds of employees at the site, where workers will prepare customer orders for final-stop deliveries.