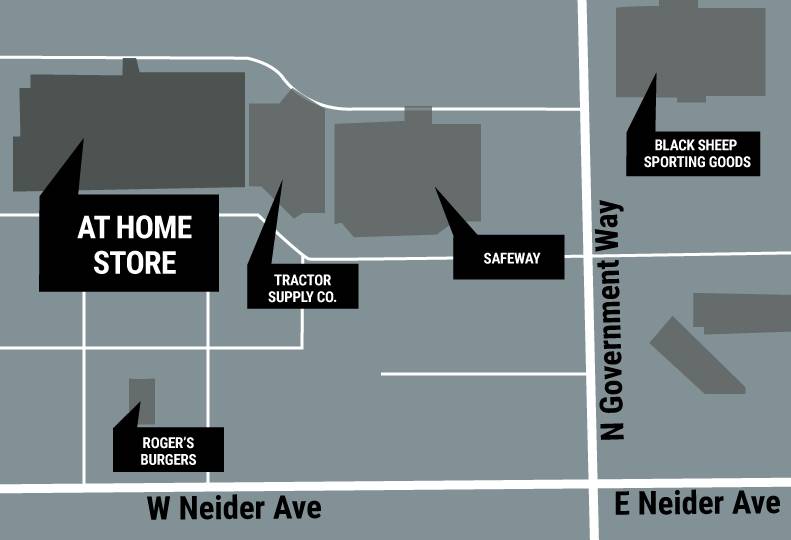 Plano, Texas-based At Home Stores LLC plans to open an outlet at the site of a former Kmart store at 201 W. Neider, in Coeur d’Alene, its second planned Inland Northwest store.

At Home, a big-box retail chain specializing in home décor products, is one of the two confirmed tenants in the former 134,000-square-foot Costco Wholesale Corp. building on North Division in Spokane.

The company is planning $3.2 million in renovations to the 87,400-square-foot retail building in Coeur d’Alene. At Home plans to occupy the whole space, and the attached garden center will be developed into a second  6,000 to 8,000 square foot retail space.

Steve Ridenour, broker with NAI Black who is involved in marketing the property for lease, says a private local developer is redeveloping the former Kmart site. Ridenour declines to disclose the name of the company at this time.

The permit information indicates the company plans to redevelop the 7.5-acre Kmart site into two retail spaces and a restaurant, in two phases.

Louisville, Texas-based design-build company Parkway C&A LP and Parkway Construction are jointly listed as both the contractor and architect on the project.

The same team is working on the project at the former North Side Costco site.

The 198,000-square-foot shopping center in Coeur d’Alene where the former Kmart is located, is also occupied by a Safeway Inc. supermarket, a Tractor Supply Co. rural lifestyle retail store, and is near a Texas Roadhouse Inc. restaurant, a Costco Wholesale Corp. warehouse store, and a Starbucks Corp. coffee shop.

Plan notes for the Coeur d’Alene project indicate other site improvements will include the replanting of street trees and other landscaping. The former Kmart site currently has 450 parking stalls, though permit notes indicate stalls may be removed for the construction of an unnamed restaurant.

The site is currently owned by Wallace, Idaho-based University City Inc. and is listed as for lease by Ridenour and Jim Koon, managing broker with NAI Black in Coeur d’Alene.

Kmart, a subsidiary of Sears Holdings Corp., closed its Coeur d’Alene store in October 2017, as part of Sears’ move to reduce holdings and attempt to regroup.

The location was one of 35 Kmart stores Sears deemed unprofitable and closed that year.

At Home, founded in 1979 as Garden Ridge, has about 180 retail stores across 34 states, according to its website, and plans to open 31 new stores this year. The company was rebranded as At Home in 2015.