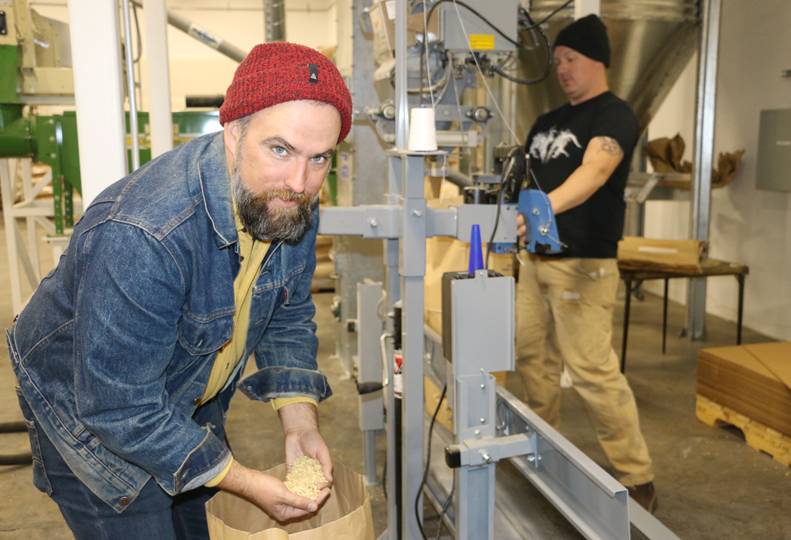 A flourishing craft beer industry in Eastern Washington has met a sagging barley market. And in the last few years, the two have become fast friends.

The emerging partnership has those in the craft beer supply chain exploring the possibility of something unprecedented: developing specific beer varietals of barley based on the agronomic zones in which the grain is grown.

“This idea that there can be this sort of nuance and exploration of flavor with malt based on where the actual barley is grown is very new,” says Brian Estes, the head of operations at LINC Malt, an affiliate of LINC Foods based in Spokane Valley.

The concept, called terroir, is similar to that of wine making in places like the Yakima Valley, where environmental factors surrounding a grape crop are scrutinized for its taste. Terroir is studied in other crops that include coffee, tobacco, and chocolate, to name a few.

The effort involving grains used in beer could lead to the creation of designated barley growing areas for beer, similar to the American Viticultural Area designation for wine grapes, though such efforts are in the infancy stages of planning.

Adds Estes: “We’re trying to move to a position to do that kind of exploration and think about flavor qualities based on location.”

Malting involves steeping of barley in water, allowing it germinate, then ending germination with warm air so it can be effectively milled by the brewers, Estes says. Malted barley produces the sugar that drives fermentation.

Todd Grove, lead brewer for River City Brewing, at 121 S. Cedar in downtown Spokane, says brewers would have a big advantage if they knew that certain varieties in specific regions across the Inland Northwest had specific flavors to offer.

“One of the challenges to beer brewing rests in attempting to create taste consistency from a commodity that’s subject to environmental variables,” Grove says.

The weather is just as much a challenge to the brewer as it is to the farmer, Estes and Grove say.

“If you’re a fan of our flagship River City Red, then you want that same taste every time,” Grove says.

It’s been his observation that unlike wine connoisseurs, who tend to appreciate the diversity of grape bouquets, craft beer aficionados are more apt to look for consistency in their favorite beers, Grove says.

As an example, he says, if he knew that a certain barley varietal that was grown just outside Colfax could help him reach his target taste constantly for his River City Red, he would most certainly use that grain in his production, he says.

As craft beer brewing across the nation has exploded, Washington barley could be to the national craft beer industry what the grape vineyards of the Yakima Valley are to wine, Estes contends.

The Boulder, Colorado-based Brewers Association, a nonprofit trade association serving small and independent U.S. craft beer brewers, says a record number of more than 8,000 breweries were operating in the U.S. last year. That number is expected to top 10,000 in the next few years, according to the association.

Brewers Association statistics show Washington state ranks third in the nation for the number of beer producers, with 394 craft breweries, up from a little more than 100 in 2011.

The state ranks 14th in the U.S. in production volume, with nearly 567,000 barrels produced annually. The craft beer industry is a nearly $2 billion industry in Washington, ranking it 15th in the nation in terms of total revenue, the association says.

“We’re in one of the world’s best grain-growing regions,” Estes says. “We’re fortunate that we’ve got the experience of the growers, the right environmental conditions, and the support and infrastructure from the grains commission and WSU.”

In this effort, the Spokane-based Washington Grain Commission recently committed $233,500 for equipment to establish a barley malt quality lab at Washington State University, on the Pullman campus, says Mary Palmer Sullivan, vice president of the commission.

The grain commission was established in the late 1950s to enhance the profitability of Washington-grown wheat and barley. Growers support the commission through an annual assessment on barley of 1% of the net receipts at the first point of sale. The commission’s board of directors then distributes the grower-imposed tax for research.

Last August, WSU hired Robert Bruggeman as its new barley breeder. Bruggeman came to WSU from North Dakota State University. He previously earned a doctorate from WSU and grew up on a farm near Spokane, Palmer Sullivan says.

Barley growing across the country, and in Washington, has plummeted in the last 20 years because there’s not much of a market for it.

As a result, there are only two barley malt quality labs in the U.S. One is located in Bozeman, Montana, on the Montana State University campus, the other at Hartwick College, in Oneonta, New York.

In 1999, a WSU report profiling barley showed 490,000 acres were harvested in the state that year. Last year, the grain commission reported just 85,000 acres of barley were harvested. By contrast, Washington wheat is harvested on at least 2 million acres annually.

“We’re excited about this potential opportunity for barley growers and the craft brewers,” Palmer Sullivan says.

Laura Lewis, who serves as director of WSU’s Food Systems Program, based in Everett, says she began to notice craft beer brewers from across the state increasingly attending the program’s annual Cascadia Grains Conference, held every January.

Bruggeman says once arriving at WSU, Murphy and Ph.D. student Evan Crane introduced him to terroir, the set of all environmental factors that affect a crop’s phenotype, which in this case includes taste.

“My predecessor began this research, and we’re going to certainly continue along that line,” Bruggeman says, noting his department recently submitted a grant application to the Western Sustainable Agriculture Research and Education program for funding in this area.

“This idea that soil, location, an assortment of environmental factors from the Palouse down through the Columbia Basin has the ability to influence is just fascinating to me,” Bruggeman says.