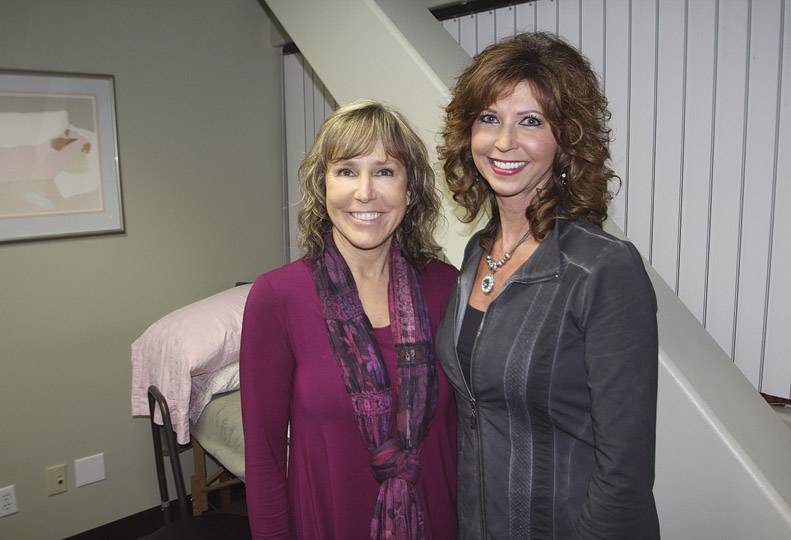 -—Linn Parish
Beyond Pink co-founders Karla Porter and Charlie Brewer say the nonprofit is reaching out to women in their 20s and 30s in hopes of helping them detect breast cancer early.

Spokane nonprofit Beyond Pink is advocating for breast thermography as an early-screening method for breast cancer—and having success in getting more women to take the test.

While the American Medical Association and others have yet to embrace the technology’s role in detection of the disease—maintaining the stance that the mammogram is the preferred screening method for breast cancer—Beyond Pink founders Charlie Brewer and Karla Porter say hundreds of women are getting screened through the nonprofit’s efforts.

“There’s no reason all women shouldn’t be adding this to their breast screening,” asserts Porter, who has a background in radiology and X-ray and operates Insight Thermal Imaging LLC in addition to her work with Beyond Pink. “The arguments I’ve heard against it don’t hold water.”

Porter says thermography is a risk-assessment tool in which a camera with a specialized infrared detector is used to make images of the heat a patient’s body is producing. When one part of the body is producing an abnormal amount of heat, typically caused by inflammation or elevated metabolism, it might be an indication that cancer is present or starting to form.

On a thermogram image, cooler and normal parts of the body are represented by blue and green colors, and potential problem areas are in yellow and red.

The U.S. Food and Drug Administration first approved breast thermography as a diagnostic tool for breast cancer detection in 1982. The FDA cautions, however, that the technology isn’t authorized as a substitute for mammography, a point that both Brewer and Porter emphasize.

“It (thermography) is not a replacement for anything, but it gives information that nothing else can,” says Porter.

Brewer says Beyond Pink, which she operates out of her South Hill home, expects to provide grants for about 500 people to undergo thermography breast screenings this year, up from 300 grants for screenings last year.

The nonprofit’s annual fundraising event, a designer bra fashion show held in mid-October, raised $150,000 last year, Brewer says. She says she has set the goal of raising $200,000 at the event next fall.

Ultimately, in addition to raising money for grants, Beyond Pink would like to open its own breast health center.

Founded about seven years ago, the nonprofit doesn’t have any employees beyond Brewer and Porter. It does work with a team of dozens of volunteers and is governed by a 15-person board, which includes people from a variety of industries beyond health care.

A full thermography examination costs $275, and imaging alone is $215.

In all, Insight Thermal Imaging currently performs exams on about 1,000 people a year, including those who receive grants through Beyond Pink and those pay out of pocket for the screening, Porter says.

The vast majority of people who receive exams are women, and 95 percent of those tests—and all of them funded by Beyond Pink—are focused on breast health. Porter says, however, that thermography can be used to detect issues with a patient’s thyroid, sinuses, teeth, spine, extremities, and for the men who receive screenings, testicles.

The imaging isn’t effective at detecting problems in a patient’s skull or in the thoracic, abdominal, or pelvic cavities.

Currently, Beyond Pink’s largest demographic is women in their early to mid-40s who live within an hour’s drive of Spokane, Brewer says.

However, the nonprofit is reaching out more to younger women, those who are in their 20s and 30s. Brewer says she and Porter recently spoke to a group of Gonzaga University students who were responsive to early breast cancer screening.

Brewer adds, “Thermography is good for women of all ages, but it’s especially good for addressing that gap.”

Currently, the American Medical Association recommends that women with an average risk of developing breast cancer—those without a family history of the disease or other factors—should begin receiving mammograms at age 50.

The American Cancer Society recommends that women start receiving mammograms annually at age 45. At age 55, if no problems are detected, they should move to receiving exams every other year. The organization adds, however, that women should start talking to their health care providers about breast health at 40 years old and should begin receiving mammograms at that age if they want to do so.

Brewer and Porter say they’ve reached out to Spokane-area providers and have some champions in the medical community, but they hope to form more direct relationships with radiology and obstetrics practices.

Porter says thermography is physiological in nature, in that it looks at how a person’s body is functioning and responding to a potential problem. A mammogram, on the other hand, can be used to detect a mass in the breast and pinpoint its location. A health care provider then can perform a biopsy and remove the mass.

The tests also are different in how they are conducted, Porter says. With a thermographic exam, a patient stands shirtless in an exam room with arms raised for 15 minutes, in an effort to allow body temperature to adjust to that of the room. After 15 minutes, thermographic images are taken using an industry-specific specialized camera.

Those images are given a thermal risk rating on a scale of one to five, with a higher rating suggesting a higher grade or risk. If any scores come in higher than two, further study in the form of a mammogram or follow-up with a physician is recommended, Porter says.