Building a Finn-tastic bond with babies 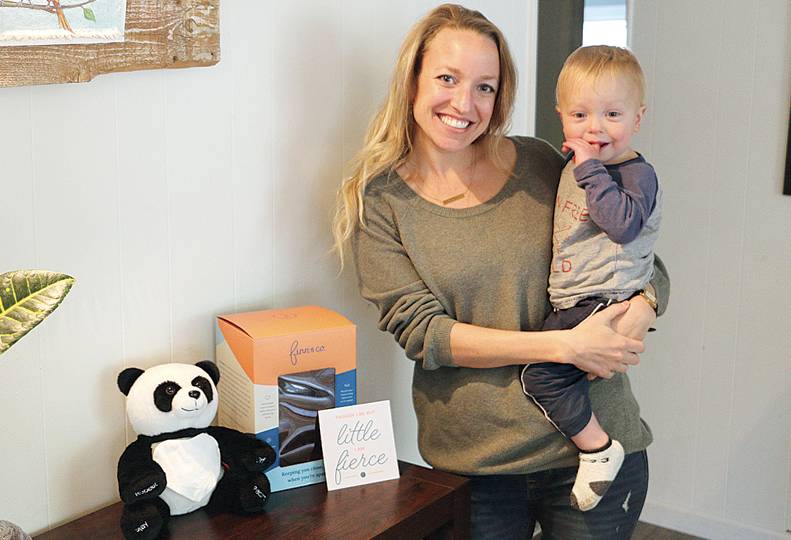 Coeur d’Alene mom Michelle Armstrong has developed Finn the Panda, a new kind of toy that she says is designed to help provide comfort and bonding to babies in the hospital.

“Finn the Panda was created through our experience of having a baby in the hospital, and recognizing how hard that can be,” says Armstrong, owner of Finn & Co. “He’s able to offer comfort and bonding to babies during those times when parents have to be apart.”

Finn the Panda is a stuffed bear that comes with a recording device to capture and play back lullabies or soft words, and a heart-shaped, detachable scent patch to leave a parent’s scent behind.

“The scent patch can be worn by mom or dad and placed with the baby to keep their scent nearby,” she says. “The recording device holds up to one minute’s worth of sound and can be set to play just once or on repeat.”

Armstrong says the bear also is made of antimicrobial cashmere to help prevent the spread of bacteria, and its black-and-white colors are appealing to a baby’s early vision.

All of the bears have been approved as meeting American Society for Testing & Materials safety standards, and each one comes with an instruction card for parents, she says.

As of last month, the bear is available for purchase on the Finn & Co. Gifts website for $79.95 and interested sponsors also can purchase a bear to be given to babies currently in the hospital.

Originally from California, Armstrong moved to Spokane in 2008. She and her husband, Will, married in 2009, and in 2014, the two moved to North Idaho to start their family. She worked in marketing for Spokane Valley-based employment agency Humanix before becoming a stay-at-home mom.

Armstrong says the idea for her product came to her shortly after her second child and product’s namesake, Finn, was born prematurely in June 2017.

“I had some very serious complications, which meant they needed to perform an emergency C-section,” she says. “So, Finn was born two months early and spent 57 days in the neonatal intensive care unit.”

Because he was born prematurely, Finn struggled with respiratory issues due to his underdeveloped lungs, and just four months after he was brought home, he was back in the hospital for 10 days to treat a respiratory virus.

During his hospitalizations, Armstrong struggled with finding ways to continue to bond with Finn, she says.

“It’s a very scary, emotional thing to know your child is sick, and you can’t always be there to hold or comfort them and connect the way you want to,” she says.

While she was in the hospital, Armstrong says she looked for ways to focus her thoughts and energy in a positive direction and began researching ways to bond with Finn and help him recover.

“I read a lot of books and studies about how things like skin-to-skin contact, and even just hearing your voice can help your baby to heal faster,” she says. “So, I started to incorporate those techniques into my visits with Finn, and I saw firsthand how much they helped him.”

Armstrong says she also read a lot about family integrated care, which is a care model that emphasizes ways for greater parent participation in the care of NICU infants, including feeding, baths, and diaper changes.

“The doctors and nurses are so intensely focused on helping these babies get better, that they don’t always have those conversations with parents about how they can help their baby heal,” she says. “I wanted to create something to help with that.”

That’s when Armstrong decided to create Finn the Panda.

Armstrong says that at the time of Finn’s birth, her husband had just started a new landscaping business and was also tasked with caring for the couple’s older son, James.

“Will was a big help, and we were also lucky to have lots of family supporting us, but many families don’t have that,” she says. “Some babies can be in the NICU a long time and their parents have to return to work, so Finn the Panda is a tool I felt could help them stay connected.”

To begin the process of creating her product, Armstrong says she began researching online, eventually joining a small business association that offered videos and webinars on toy manufacturing, specifically.

She also met with a local chapter of Service Corps of Retired Executives, also known as SCORE, a nonprofit organization that offers free and confidential business mentoring services.

Armstrong says she established her company, Finn & Co. LLC at the end of December, and developed her website for Finn & Co. Gifts shortly after.

Although she initially wanted to manufacture the bears in the U.S., Armstrong says ultimately she chose a manufacturer in China, which ships the bears to her home near Post Falls.

While she declines to disclose her initial business costs, Armstrong says she used all of her savings and some money she inherited from her mother to order the company’s first batch of 1,000 bears.

“My mother passed away in June 2018, one week before Finn’s first birthday,” says Armstrong. “But she loved the idea of Finn the Panda and was so excited for me to pursue this dream.”

Armstrong says she was reluctant to order more than 1,000 bears to start, as she’s still researching how large of a market there is for the toy.

“The first batch of 1,000 bears arrived last month, and so far we’ve distributed 25,” she says. “Some orders have been donations from my own family and friends, but we also get orders and requests from people who know parents with a baby in the NICU.”

Armstrong says she’s also been reaching out to foundations that support NICUs and already has had one request an order of 50 bears.

Looking ahead, Armstrong says she’s currently working with Spokane-based Wells St. John Law office to develop a patent on the bears, and her goal is for Finn & Co. to become the go-to brand for hospital staff and parents with babies in the NICU.

“I want this to be the top product people think of when they think of the NICU,” she says. “Ideally we’d like to be in every hospital gift shop, or on hand for staff to ‘gift’ to families with babies in the NICU.”

Armstrong says she’s already met with officials from Kootenai Medical Center, in Coeur d’Alene, and Providence Sacred Heart Medical Center & Children’s Hospital, in Spokane, and is working with both to get the bears into area NICUs.

Although her current focus is on marketing the bears to families with babies in the NICU, Armstrong says she can see Finn the Panda being a helpful tool in pediatrics, oncology, and children’s ICU as well.

Armstrong says for her, helping families is more important than making a profit off of Finn the Panda.

“It’d be nice to make back the initial investment we’ve put in, but really this was a dream I had that I would have regretted not pursuing,” she says. “It’s already turned out to be so much more than I’d expected.”

Armstrong says she’s heard feedback from mothers and families all over the country, who have received donated bears.

“Each time I talk to a family and hear how much it meant to them to receive Finn the Panda and what it did for them while their baby was in the hospital, I am more determined to get him into the hands of every family who could use him,” she says.