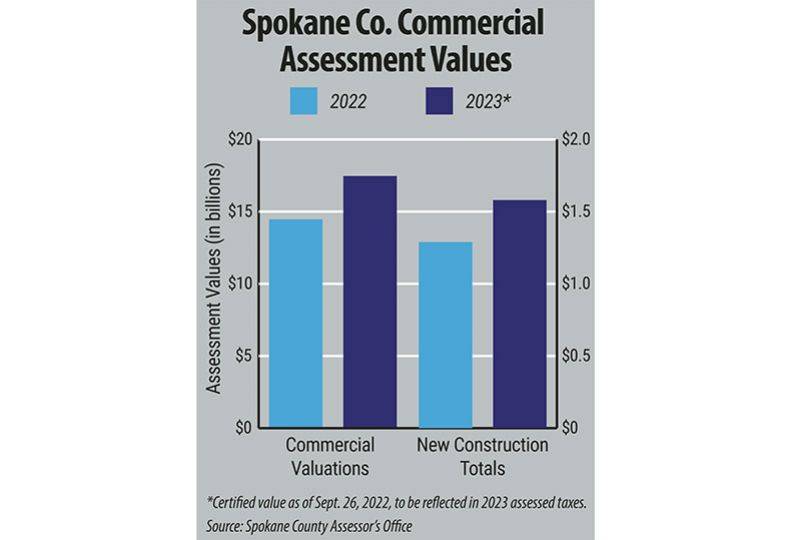 As of last week, Spokane County assessed just over $1.58 billion in new construction projects, a 22.5% increase from 2021, which makes 2022 a record-breaking year, even with 731 fewer properties assessed for new construction this year, says Konis. In 2021, new construction developments were valued at $1.29 billion, data provided by the Assessor’s Office shows.

Assessed values for all commercial properties for the 2023 tax year total $17.5 billion, an increase of 21.4%, from the previous year’s value of $14.4 billion, says Konis.

The highest assessed values for new construction developments are for a mix of school projects, industrial developments, and multifamily properties, including the $46 million Northwest Middle School and Joe Albi Stadium demolition at 4918 W. Wellesley; the $41 million Yasuhara Middle School, at 2701 N. Perry; and the $25 million Selkirk Pharma facility, at 9110 W. Granite, on the West Plains, according to data provided by the Assessor’s office.

The Rockwood at Whitworth retirement community project, at 101 E. Hawthorne, has an assessed value of $22.8 million; followed by the $22 million Glover Middle School, at 2404 W. Longfellow; and the $17.8 million Affinity at Mirabeau senior residential community, at 13525 E. Carlisle, in Spokane Valley.

“Multifamily without a doubt is driving assessed values,” says Konis. “If you just drive around, you see them all over the place, especially in Spokane Valley. It’s nuts out there.”

Konis adds that the value of the Big Trout property has doubled from $39 million in four years, when it last changed hands in 2018.

Bruce Jolicoeur, senior managing director at Valbridge Property Advisors|Auble, Jolicoeur & Gentry Inc., says the Granite Pointe real estate transaction is worth the sum of all apartment-complex sales only a few years ago.

Jolicoeur says he has also noticed the multifamily market has been “absolutely astronomical with rents that have been unachievable and unimaginable just a few years ago.”

Konis explains, “We’re having a lot of sales activity for multifamily properties from people and corporations from out of town, because it costs them less to buy here. Even with our values as high as they are to us, we’re still cheaper than Seattle, and our rents are good, so our rate of return, from a business standpoint, is also good.”

Jolicoeur notes that high rents for apartments and other industrial properties likely will be the norm to cover growing construction costs going forward.

Konis agrees and says residential values totaled $65.4 billion, an increase of $15.4 billion, or 30.9%, compared with the previous year.

Berg says, “I’m not in the commercial valuation business, but I’ve been an investor in commercial properties recently, and I’ve noticed an investor could buy a commercial property they’re interested in with very low interest rates up until February, and now the rates are coming up along with the cap rates and the volumes are going down.”

Konis says he expects commercial property values will continue climbing, although he notes that market conditions haven’t had time to react to the increased interest rates yet.

“If the Big Trout Lodge sale is any indication, it sure looks like this isn’t slowing down. It’s a little too soon to tell what interest rates are going to do, though,” Konis says.