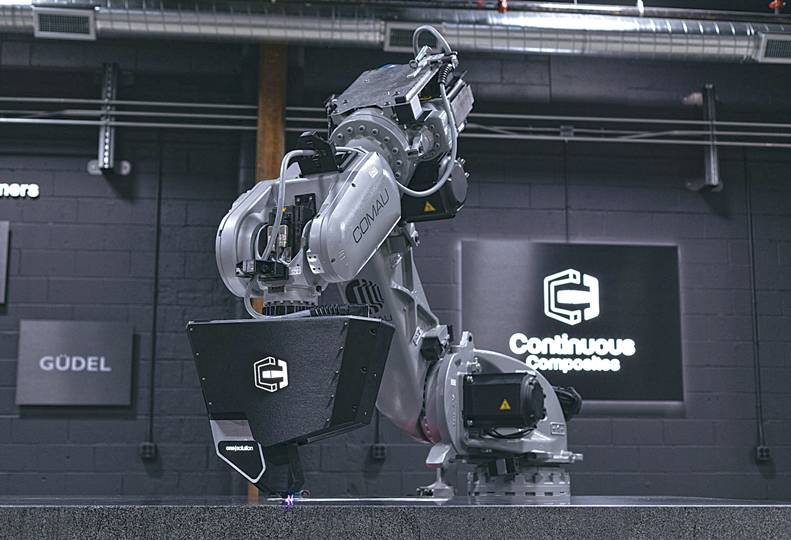 A Coeur d’Alene-based 3D manufacturing company is preparing to commercialize its technology with a new international partnership.

The company, Continuous Composites Inc., is “laser focused” on the commercialization of its technology, says CEO Tyler Alvarado.

“It’s exciting to get the technology into the hands of other engineers and be collaborating with our engineering team for the rapid advancement and commercialization for the aerospace sector,” he says.

Continuous Composites designs and manufactures 3D printing robotic arms to build composite parts for a multitude of uses. Its technology is capable of printing with carbon fiber, fiberglass, and Kevlar, by layering fibers using robotic technology, while curing the materials with ultraviolet light.

It can also print using optical fiber, copper wire, and nichrome wire, all of which can accommodate sensors, circuits, and heating elements embedded in composites.

Saint-Gobain reached out to the company around April 2020 and has since invested in Continuous Composites through Saint-Gobain’s venture capital arm, NOVA, says Alvarado.

While the final details are still being discussed, Alvarado says several of Continuous Composites’ machines will be shipped to Saint-Gobain facilities.

“It sends a great signal to the rest of the aerospace industry,” he contends, adding that being embraced by Saint-Gobain, which was founded in 1665, is also a signal to other industries, such as Formula 1 racing, health care, and construction, of how the technology could be used.

“It really has applications across many different industries from aerospace to defense to automotive,” he says.

The company also is making progress in the energy industry.

Munich, Germany-based Siemens Energy AG, an energy company that has partnered with Continuous Composites, released a case study on May 11 of a successful demonstration of the Coeur d’Alene company’s technology in the manufacturing of generator components.

“It’s an application where they’re going to bring our tech into the next generation for electric power generators,” says Alvarado.

The two companies collaborated over multiple years to develop a thermoset glass fiber-reinforced polymer material, which performs better at high temperatures than metal generator components, according to the study.

Study data also shows the use of the CF3D process with the new material resulted in an 80% reduction in manufacturing costs and decreased lead time to three weeks from an average of eight to 10 months in the manufacturing of metal components.

Last month, the company completed its two-year contract with the U.S. Air Force Research Laboratory through a strategic partnership with Lockheed Martin Skunkworks, which focused on a new structural wing design with corresponding materials and manufacturing.

The company also works closely with the Department of Defense, adds Alvarado.

Alvarado declines to disclose the current number of employees at Continuous Composites, but says the company expects to double its headcount by the end of the year, with new positions across the spectrum of the company, including several engineering positions and administrative, customer support, and sales jobs. The Journal previously reported Continuous Composites had 30 employees as of September 2019.

“One of our core commitments to this community is creating these high-paying, high-value tech jobs, allowing our local talent to stay local,” he says.

Six open positions were posted on the company’s website as of May 11, and the company plans to post several new job openings in the coming months, Alvarado says.

He declines to disclose the company’s annual revenue.

Tyler, Alvarado, and John Swallow, who is also president and CEO of Coeur d’Alene-based New Jersey Mining Co., launched Continuous Composites in 2015, and moved it into its current location the following year, where it initially occupied 5,500 square feet of space and had 22 employees.

“We’ll be okay for about the next 12 to 24 months as we scale up commercialization,” he says.

Looking back, Alvarado says, “I knew we had a tiger by the tail from the beginning,” in how valuable and in-demand the 3D technology would be.

“We knew we were going to have a very successful and prominent business that was going to create a lot of great jobs in this area and create a lot of reinvestment back into this community,” he says.