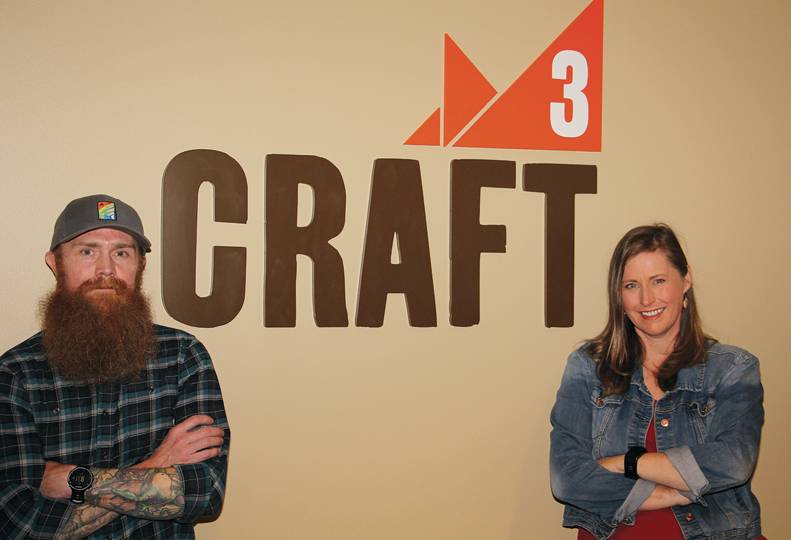 In a time like this, the value of the nonprofit Craft3 can’t be underestimated, claim two of the organization’s Spokane employees.

Craft3 specializes in lending to businesses and people who can’t secure funding from conventional sources.

Despite the implementation of the Payroll Protection Plan in response to the COVID-19 outbreak, many small businesses in the Spokane area weren’t able to secure funds, say Craft3 senior credit underwriter Brad Ferris and business lender Megan Hulsey.

In response, Craft3 put up $400,000 of its own capital along with $100,000 from the city of Spokane to create a Business Resilience Loan program to help some existing businesses weather the coronavirus storm. As of last week, nine businesses here had secured funding assistance through that program, and $275,000 is still available, says Hulsey.

Adds Ferris, “That’s why we exist.”

Kitchen Spokane, Spokane Ballet, and The Silver Element are among the recent recipients of financing through the Business Resilience Loan program, according to Hulsey.

Nonprofits such as Craft3 aren’t intended to be long-term alternatives to larger financial institutions.

Founded in 1994 in the town of Ilwaco, on the extreme southwestern edge of Washington, Craft3 now has lending centers here and in Seattle, Walla Walla, and Port Angeles. In Oregon, Craft3 has offices in Portland, Astoria, Bend, and Klamath Falls.

Craft3, which is designated by the U.S. Department of the Treasury as a Community Development Financial Institution, has a total of 65 employees, six of whom are in the Spokane office, located in a third-floor suite in the Peyton Building, at 10 N. Post, in downtown Spokane.

Craft3 manages more than $146 million in capital raised from corporate, financial, government, philanthropic, and religious institutions. Since its founding, the organization says it has provided more than $580 million in financing to more than 7,700 borrowers in Oregon and Washington, as well as a few in North Idaho via the Spokane office.

“Craft3 maintains a 100% repayment history with all investors since inception,” says the organization’s website.

Despite the fact most employees here are still working from home, Ferris, Hulsey, and system support specialist Cliff Diamond, recently have overseen the office’s move to a 2,500-square-foot office suite on the third floor from smaller quarters on the second floor.

“It was getting a little crowded down there,” says Ferris, the last of the three original hires in the Spokane office.

Craft3 opened its Spokane office just over five years ago.

Since its debut here, Craft3 has provided $20 million in loans to more than 60 entities. More than 500 jobs have been created or supported in the process. Nearly half of the loans (48%) have gone to businesses owned by women, minorities, or veterans, Hulsey says.

To date, entities in seven Washington counties and one in North Idaho have secured loans, Hulsey says.

“Most startups can’t secure funding from traditional sources until they’ve been in operation for at least two years,” says Hulsey, who once worked at StartUp Spokane a program of Greater Spokane Incorporated.

When she started working at Craft3 seven months ago, a half-dozen to dozen applications from startups came across her desk per week on average. Since mid-March, however, she has seen no more than two per week.

“It’s often the case that long-term innovation often thrives in economic adversity,” Hulsey says. “But the challenge with this pandemic is we don’t know what the short-term path will be.”

She cited the recent demise of Stay Alfred Inc., a short-term travel rental company that had been a poster child for Spokane startups.

“Stay Alfred … it had a lot of things going for it,” she says. “But there was no way to predict that a worldwide virus would bring it to an end. There’s just so much short-term uncertainty.”

Hulsey adds, “Now would hardly be the most prudent time to extend funding to a tourism-based startup.”