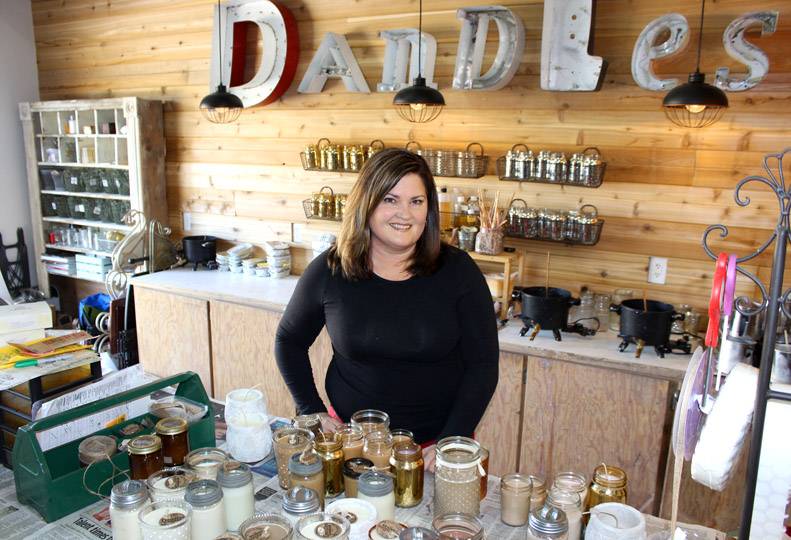 -—Treva Lind
Dandles Candles LLC owner Dana Haynes says she makes 6,000 to 7,000 candles a year, and sales are up this year. 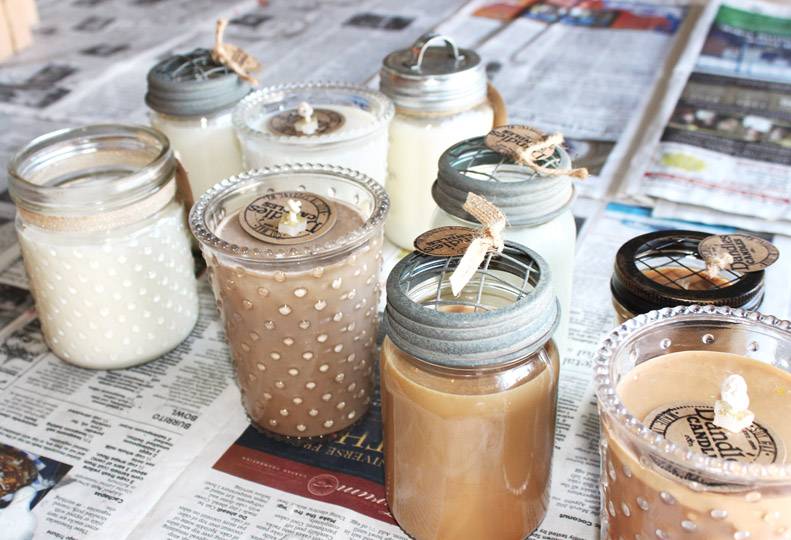 -—Treva Lind
Dandles Candles are stocked in about 20 retail outlets throughout the Northwest. They come in 49 different scents and retail for between $8 and $35 each.

Dandles Candles first kindled as a relaxing hobby, when Dana Haynes sought to de-stress from full-time work as a KHQ-TV news reporter. She created a handful of artisan candles for gifts.

Today, Haynes makes hand-poured soy wax candles at a rate of about 6,000 to 7,000 candles a year, still crafted in small batches. She now divides her work life, about half devoted to Dandles Candles and the other half doing part-time contracted public relations work along with occasional TV anchoring.

That’s good, because in recent years, Dandles Candles has had a steady increase in sales of its decorative container candles that Haynes creates in a 600-square-foot workshop next to her West Spokane home.

“I love the balance of the PR work and the candle making,” says Haynes, the sole owner and employee. “I think it fulfills the creative side, and the side that loves business and communications.”

She adds, “Sales are up more than 30 percent year over year. I can’t put my finger on why, but I’m happy about it.”

One theory, she says, is that more Spokane residents are looking to buy locally made artisan products. The candles also have vintage-inspired designs, a popular touch for decorating in homes and businesses.

“I try to be creative with the decoration of the containers or the lids,” she says. “Most of my line is vintage inspired.”

The 18-year-old Dandles Candles got its name from a play on words using Haynes’ first name, which is pronounced DAN-ah.

Prices for the company’s candles range from $8 to $35, and they come in a wide array of sizes and types of containers. Available in retail outlets and via a company website, Dandles’ candles also have labels that say, “Made in Spokane, WA.”

The period each year starting in early September and running through December is the company’s busiest time because of holiday gift sales and from Haynes’ efforts to ramp up displaying products at artisan shows.

“As we move into fall and Christmas, Dandles Candles becomes a much larger portion of my workdays,” she says. “I’d say nearly half of my yearly sales are in those four months.”

The candles are in such retail outlets as Simply Northwest, in Spokane Valley; To Market, at River Park Square; Lucky Vintage, southwest of downtown; and Ferrante’s, on the South Hill.

She says Dandles Candles products are stocked in about 20 retail outlets, small and large, around the Northwest and in shops across the country, including in North Carolina and Texas.

In the past year, the company’s website was revamped, so more sales are occurring online, she adds.

Staffing a booth at regional farmers’ markets isn’t an option, however, because those venues seasonally run when temperatures are typically too warm, Haynes says.

“Much above 85 to 90 degrees, the candles start to sweat, which means they’re starting to melt,” she adds. “In the summertime, I sell mostly in retail stores.”

By fall, it’s a different story, including a Dandles Candles booth at a fall festival held at Lucky Vintage. “That’s in and around the Lucky store, and a whole bunch of vendors will be there. That’s probably my best-selling show. I’ll sell upwards of 80 to 100 candles.”

She plans to have a booth at an annual Kendall Yards holiday artisans show in early December.

“I am trying to add one or two new shows a year,” Haynes says. “I’m doing a show in Leavenworth Sept. 9. My products sell well on the West Side too, so I’m trying to expand my reach into that Seattle and Puget Sound area. Leavenworth has a large customer base from the West Side.”

When she started the business, Haynes presented candle products at in-home parties, a practice she has mostly dropped, but one remains on the calendar each year in Lake Stevens, Wash., at the house of a high school girlfriend. That party annually draws 30 to 40 people.

A Washington State University graduate, Haynes grew up in Lynnwood, Wash. After her first TV job in Boise, she was hired by KHQ in 1996. About a year prior, she had spotted candles in a store and thought about making them at home.

“I went to a hobby store—it was the days before Pinterest and websites—and just grabbed the things I thought you’d need. I made candles for friends and family. They were really rustic.”

In Spokane, she further developed candle-making skills on countertops of an apartment. Haynes jokes that even though she cleaned before moving, she didn’t get the rental’s deposit back.

She adds, “For me, it was trial and error, or as they say in the candle-making business, melt your mistakes. There really is a science to it.”

She launched the business officially in 1999. Co-workers held a Christmas gathering and asked Haynes to bring some candles.

“I sold them all and took orders for 40 more; that was the business in the beginning, my KHQ co-workers,” she says. “Through the years, I did it as a side business alongside my full-time job. It just kept growing.”

Production moved to a small garage of a South Hill home, then to the basements of two more homes. Haynes and her husband moved to their West Spokane home two years ago. “It’s grown bigger than what a basement could hold,” she adds.

Haynes left KHQ in 2010 to become communications director at Visit Spokane, staying until 2012, when she saw higher growth in Dandles Candles.

For her public relations work, she has a small group of regular clients. Separately, Haynes goes “on air” about six days a year as a KREM contract employee.

Most other work days, she walks to Dandles Candles’ workshop. A large production area along one wall is used for melting the soy wax, done in small commercial pots. Haynes adds high-quality scent oils, ones specifically made for candles.

After some cooling, the melted wax goes into metal pitchers to pour into individual candle containers. The workshop also has a long, sturdy central workbench.

“In candle making, you need a lot of flat space to pour candles,” she says. “You want the top of a candle to be even.”

Haynes says soy wax is made from U.S.-grown soybeans and gained popularity for use in candle-making about 15 years ago.

The soy material, appearing in thin flakes until melted, is considered a natural wax and isn’t the petroleum-based paraffin typically used for pillar candles.

Only one Dandles Candles product in the line is made with paraffin, Dandles Dots, which are wax melts for ceramic pots plugged into electrical outlets.

Haynes offers customers the option of having candle containers refilled at about half the original price. She only requires fully-cleaned, original Dandles containers dropped off at one location, Lucky Vintage.

After easing back from in-home parties, Haynes transitioned to consignment-based sales in hair salons. She managed the inventory in each shop, taking back what didn’t sell without charge and invoicing the salon owner, minus a small commission, for items that did sell.

“I still have three or four salons I work with,” she says. “That’s a common practice in vintage stores and salons that have a consignment model of retail. It’s a great way to figure out what sells.”

“I pride myself in a small-batch approach,” she says. “My products have gotten better over the years. This grew out of a hobby and love for candle-making. They’re 100 percent homemade.”