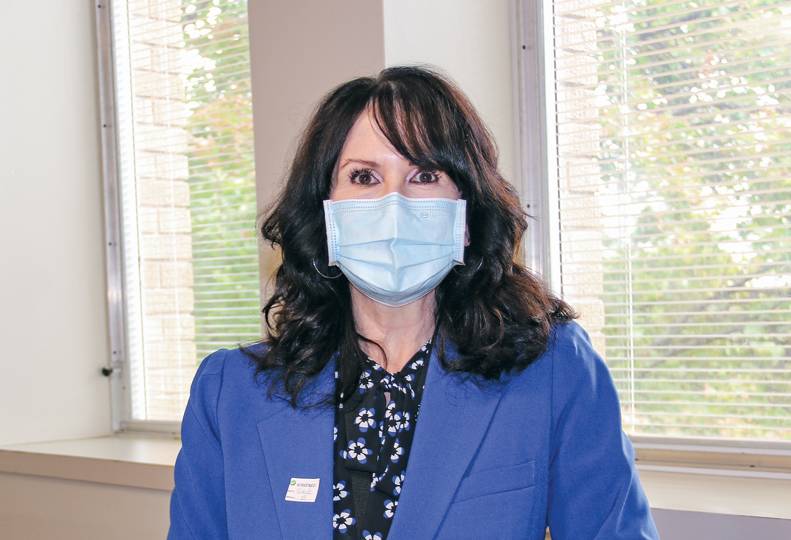 In the face of COVID-19, Eastern State Hospital, in Medical Lake, has been recognized by Centers for Medicare and Medicaid Services for setting up separate wards for quarantined patients and COVID-positive patients, despite a temporary funding cutback.

At the outset of the pandemic, the secure psychiatric hospital lost 15% of its operational funding from the state of Washington due to a projected drop in state revenue at the beginning of the pandemic.

The hospital in turn had to shutter one of its 13 wards, says Dr. Robert Henry, the hospital’s chief medical officer.

“We actually kept that ward going, but we turned it into a quarantine ward for folks coming in so we could have a place for them to isolate in case they were positive,” he says.

Though the Legislature since has restored funding for the ward, it will continue to remain in partial use for quarantine purposes, he says.

Henry used the following example to describe what it’s like working in the facility during a pandemic.

“It’s sort of like getting use to a sprained ankle,” Henry says. “It still hurts, but it just becomes the normal and you move forward as best you can.”

Adds Henry, “I think we’ve done a very good job of protecting our patients and minimizing exposure from folks coming in from the outside who would bring COVID into the hospital.”

The Centers for Medicare and Medicaid also acknowledged the inpatient psychiatric hospital as a best practice for its patient education and procedures for donning and doffing of work clothes, gear, and personal protective equipment during the pandemic.

To date, Eastern State Hospital has had roughly 40 patients and about 100 staffers contract the virus since its outbreak, which resulted in the death of one of its employees in April  2020. None of the hospital’s patients have died from the virus, he says.

Henry says those are “pretty good numbers” given the fact the hospital has operated in a pandemic environment for well over a year.

Joey Frost, the director of organizational development and communication at the hospital, says the state-funded hospital will follow Gov. Jay Inslee’s mandate for all state employees to be fully vaccinated by Oct. 18.

Following Providence Sacred Heart Medical Center & Children’s Hospital, and Providence Holy Family Hospital in employee size, Eastern State Hospital is the third largest hospital in Spokane County, in terms of number of employees. Its total employment count tallies 862, down from a little more than 900 before the arrival of COVID-19, says Frost.

The hospital currently is looking to fill several positions, especially in its nursing units, as many staffers have retired in recent years, she says.

Patients are admitted to Eastern State Hospital through the court system. A patient who is subject to an involuntary civil commitment order—in which a court has determined a patient is likely to cause harm—typically is admitted to one of the hospital’s psychiatric units for seven days to six months of intensive inpatient treatment, Frost says.

Someone who has committed a crime and is found incompetent to stand trial is admitted to the hospital’s forensic services competency restoration unit, she says.

Someone admitting to committing a crime but seeking to excuse the behavior by reason of mental illness is admitted to the forensic services unit designated for people not guilty by reason of insanity.

The 367-bed hospital has 256 patients as of last week. The pandemic has forced a reduction in the number of patients, as rooms being used for isolation purposes can only host one resident, he says.

“Our social work team has done an amazing job of continuing to get people out of the hospital at a rapid pace,” he asserts.

Henry first went to work at Eastern State Hospital in 2001. He left for a three-year stint at Mann-Grandstaff VA Medical Center, in Spokane, before returning to psychiatric hospital.

Compared to 20 years ago, the hospital is a much different place and is better for it, he claims.

Henry spoke candidly about the climate that once existed at the hospital.

“It was rough, it could be very rough at times,” he says. “There was sort of a more Department of Corrections approach.”

Over time, however, there has been a cultural shift toward demonstrating more em-
pathy to pat-ients, he says. Hospital staff also has developed more individualized care for patients.

“You find that works a whole lot better than the approach before, which was quite punitive,” Henry says. “Just asking the patient, ‘What’s going on?’ or ‘What would you prefer?’... apologizing if something happens. It means a lot to folks if you treat them with dignity and respect.”

Eastern State Hospital is comprised of three buildings that have a total of 422,000 square feet, according to Dean Davis, facilities director for the hospital.

Hospital officials say they currently are building a new energy plant that will replace an original steam plant building constructed at the time the hospital was established in 1891.

The $14 million project is scheduled to be completed next spring.

“One of the cool things we’re doing with that building is putting up a solar farm,” Davis says.

He adds, “There’s going to be approximately 32 solar panels that will be up on the hillside and running most of that building.”

Also, a $1.8-million patient safety modernization project is scheduled to go out to bid this month with an estimated start date in March 2022, Davis says.

“We’re trying to get the rooms to where they don’t look so institutional,” Davis says.