Some attorneys here say trend may reverse in ’21 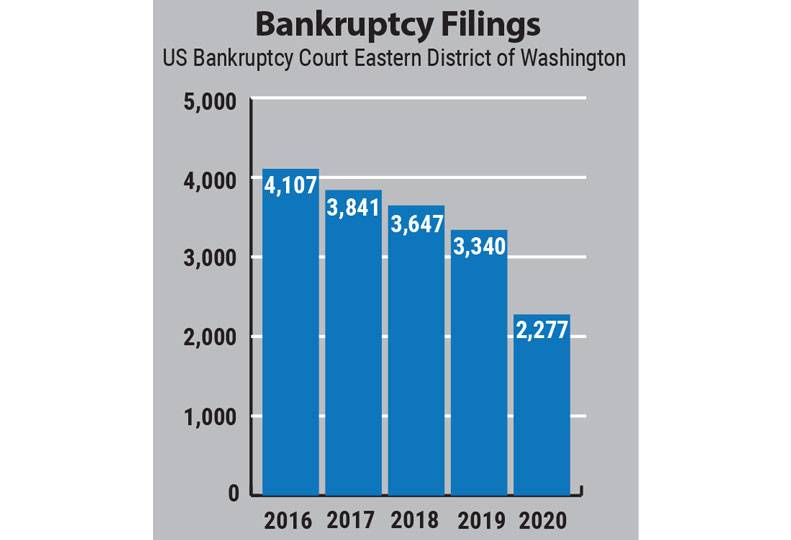 Despite the economic havoc COVID-19 brought on wide swaths of the economy last year, the pandemic’s presence didn’t halt the downward trend of bankruptcy filings in Eastern Washington.

Instead, the annual bankruptcy filings dropped by an even larger percentage in 2020 than the previous eight years.

A number of Spokane-area bankruptcy attorneys point to enhanced unemployment benefits and moratoriums on evictions and foreclosures as two significant reasons bankruptcy filings are down.

“More than at any other point and time in the 23 years that I’ve been doing this, creditors were generally less aggressive last year,” says Robert Hahn, of Spokane Valley-based The Law Office of Robert C. Hahn III PS.

For the short term, Hahn says, additional federal dollars to statewide unemployment benefits in 2020 helped stabilize the financial position of at least a half-dozen would-be filers whose cases he was preparing to represent.

Hahn says six clients either experienced reductions in work hours or lost their jobs altogether. But by the time he prepared to enter their bankruptcy claims to court, they were already collecting unemployment.

“They were all over-income for being eligible to file,” he says. As it relates to possible bankruptcy, being over-income means unemployment insurance benefits gave them sufficient income to pay all of their bills, according to Hahn.

Reflecting a strong economy spanning several years, bankruptcy filings have been dropping annually since 2012, when 5,575 filings were submitted to the court.

Hahn says 2021 could be the year in which the downward trend of declines in filings in Eastern Washington comes to an end.

“If moratoriums aren’t extended, if unemployment insurance dissipates, I think there could be substantial filings this year,” he says.

Broken down by type of bankruptcy, just a little more than 1,800 Chapter 7 cases were filed, making up 80% of the total number of filings in the Eastern District. Chapter 13 filings totaled 446, while there were a scant 11 Chapter 11 filings submitted to the court, records show.

In Spokane County, 648 Chapter 7 filings were recorded, along with 108 Chapter 13 filings, and no Chapter 11 filings, records show.

Chapter 7 cases involve filers seeking to liquidate assets. A Chapter 13 filing allows a person or company to present a financial reorganization plan that sets up a court-approved repayment plan. A Chapter 11 involves the reorganization of the debtor’s business affairs.

Bruce Medeiros, a Spokane-based attorney with Davidson Backman Medeiros PLLC, contends Chapter 11 filings were low in 2020 due to the fact that many businesses—particularly restaurants—didn’t see the need to file for bankruptcy.

“Unfortunately, for so many in the restaurant industry, it was just easier to stop operating altogether,” Medeiros says.

He adds, “If your business isn’t making money, then there’s no reason to pay the cost of filing fees for a bankruptcy to the court.”

Beyond enhanced unemployment insurance and eviction bans in place to help those who were laid off, COVID-19 created a different societal phenomenon than that of the Great Recession more than a decade ago.

Hahn, 51, has firsthand knowledge of some of those “bigger things.” He and his wife are both working from home while raising their 5-year-old and 3-year-old children.

“Preparing to file for a bankruptcy is just one more thing on your plate,” he says.

Hahn also speculates that the sudden arrival of COVID-19 didn’t allow people the opportunity to mull over the prospect of filing for bankruptcy.

He has observed over the years that bankruptcy filers often have been “under extreme pressure” financially for quite some time, and they finally file as they see no other way out.

“For those currently experiencing financial challenges, my gut tells me that people are hunkering down and trying to get through this time as best as they can,” Couey says.

Couey says some clients he had started representing in late 2019 and early 2020 who were contemplating filing for bankruptcy backed off when the pandemic spread throughout the country.

“With society shut down, there are a lot of people out there who are actually saving money because there’s not much to spend it on,” he says.

Couey, who has been practicing law for 17 years, says the lack of bankruptcy activity in Spokane and surrounding communities in recent years has forced him to diversify his law practice, including handling legal affairs for two Washington state prisons.

“If I had to predict, I’d say this is the calm before the storm,” Couey says. “Since the start of this year, I’ve received more inquiries from people looking to file.”

He says, however, those potential clients are holding out hope against having to file.

“Right now, this is just a really weird time,” he says.