Charging infrastructure, price, lack of options said to be barriers to adoption 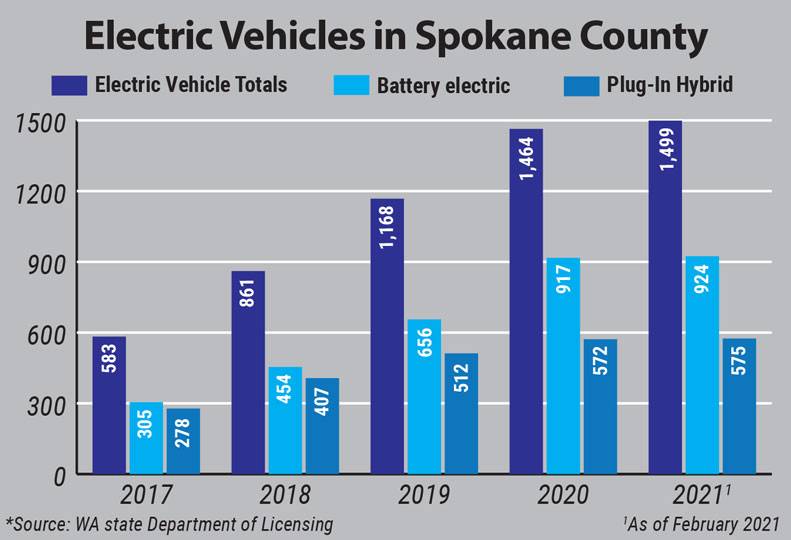 Electric vehicle purchases have been increasing steadily among Spokane County residents, but industry observers say there are still several hurdles to widespread adoption.

Overall, electric vehicles represent roughly 1.1% of all vehicles in the state.

Michael Breish, senior energy policy specialist in the Washington state Department of Commerce’s Energy Office, speculates that electric vehicles are more common on the West Side for a few reasons, most notably that most electric vehicles are priced well above the median price of an average gasoline vehicle and the smaller selection of vehicle models to choose from relative to gasoline vehicles.

Data also shows consumers on the east side of the state tend to prefer trucks or sport utility vehicles, a market that currently has a limited number of electric options for buyers.

Breish adds, “There’s also probably an education gap where folks on the east side might not think that an EV can work for them.”

He notes that the charging infrastructure also needs to be built out further before a larger number of consumers would be comfortable investing in such a vehicle.

Electric vehicle adoption in Spokane tends to be cyclical, contends Shayne Goff, general manager for Wendle Ford Nissan, on the North Side.

“It’s largely driven by what the customers want and what the manufacturers produce,” he adds.

Sales of electric vehicles tend to increase when fuel prices increase and when manufacturers introduce incentives to purchase the vehicles, Goff says.

Sales go down in the winter, due to fears of lower battery performance in the cold, he contends.

Electric vehicle sales account for 5% of the Wendle dealership’s annual sales, says Goff, who notes that he expects that percentage will increase over the next five to 10 years as manufacturers deliver on their promises of developing new lines of electric vehicle by 2025 or 2030.

General Motors Co., Ford Motor Co., and Volkswagen AG have announced plans to spend a combined $77 billion over the next five years to develop electric vehicles. GM has established a goal of ending the manufacturing of gasoline- and diesel-fueled passenger vehicles by 2035, and the company plans to be carbon neutral by 2040.

A plug-in hybrid vehicle is a gas-powered hybrid with a larger battery and uses an external power source to recharge it. The gas-powered engine only kicks in when the battery doesn’t have a sufficient charge. A full-electric vehicle relies solely on a battery and doesn’t include an engine or gas tank.

The new Ford Mach-e and the Nissan Ariya electric vehicle models are expected to hit showrooms this year, he says, and a potential debut is rumored for a Ford F-150 electric truck.

The Nissan Leaf is the Wendle dealership’s best-selling electric vehicle, though Goff contends that’s likely because it’s been on the market the longest. Electric vehicle sales likely will increase as new models hit the market, and manufacturers develop “more usable and more accessible products,” he adds.

Currently, electric vehicles account for less than 68,000 of the 6 million total vehicles registered in the state.

While the state is moving toward wider adoption of electric vehicles, its emissions and energy standards goals also include other efficient modes of transportation, such as bikes and electric buses, Breish says.

A broader used electric vehicle market on top of incentives for purchasing new vehicles also will help, he contends.

An informal survey by the Journal of dealerships in Spokane and Kootenai counties found 41 used electric and hybrid vehicles for sale within a 50-mile radius.

Ensuring that every driver has access to a charging station is also key, he adds.

There’s a perception that only single-family home dwellers can install an electric vehicle charger for home use, he contends. Expanding chargers to apartments and rural settings will aid accessibility, he says.

Spokane County received a $2.5 million grant from the state Department of Commerce in January to install over 50 electric vehicle chargers throughout the county.

Michael Furze, assistant director of energy for the department, says the project also will study how the different charging stations affect Avista’s grid. Results will serve as a road map for other utilities, he says.

Breish says the state is looking at adopting California zero-emissions vehicle standards with the goal of at least 7% of all new cars sold in Washington to be electric in 2023 and all new passenger cars sold to be electric by 2035.

“What we need to do with other states is signal to automakers that we’re here for an electrified future and we want to see a diversity of models,” he contends. “As we’re seeing with not just states but with national governments going electric, automakers are preparing to bring out different models, and the zero-emissions vehicle mandate gets those (vehicles) to Washington state.”

How the state will pay for infrastructure for electric vehicles, which don’t contribute gas-tax revenue for funding transportation systems and the effect those vehicles will have on the utility grids, is something the state will need to contend with as more people make the switch, Goff says.

Senate Bill 5444, introduced this legislative session, seeks to repeal those fees and replace them with a per-mile fee beginning July 1, 2026. If the bill passes into law, the rate will be 2 cents per mile driven until June 30, 2029, after which the rate will increase to 2.5 cents per mile.

Breish contends statewide electrification will take partnerships at every level.

“No one entity can make this happen in a way that works for all of Washington,” he says. “The sooner it happens, the quicker we can reduce our carbon footprint and we can bring these environmental health benefits. We know the quicker we get these polluting vehicles off the streets, the quicker our overburdened communities will benefit from cleaner air, less noise, and the economic benefits from having a diversity of mobility solutions.”

A poll late last year by Consumer Reports found only 4% of adults with a driver’s license plan to purchase an electric vehicle the next time they buy, while an additional 27% said they’d consider one. About 40% expressed interest in buying an electric vehicle, but not for their next purchase, while 29% said they don’t intend to purchase an EV ever.

Another poll by J.D. Power, also completed in late 2020, found 20% of people who intend to buy or lease a new vehicle in the next 18 months were likely to buy an EV, while about 21% said they were unlikely to. The rest were undecided.