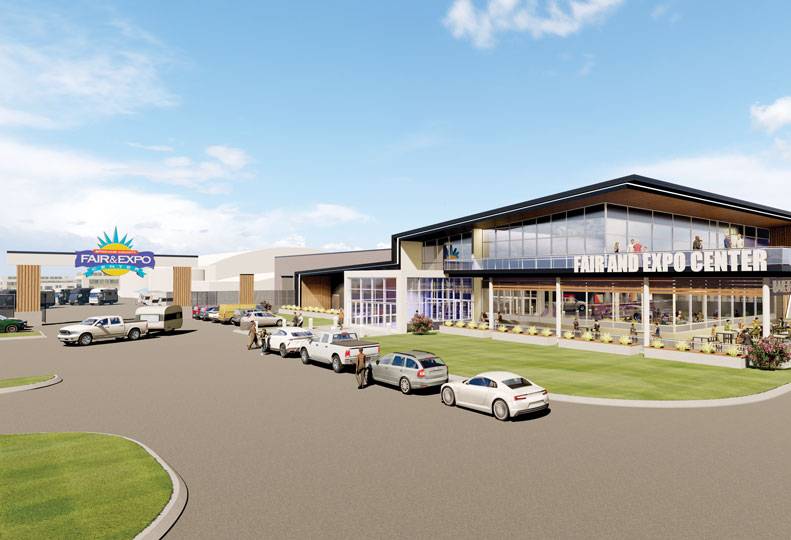 -Architects West Inc.
An expansion of the Spokane County Fair & Expo Center is one of several projects the city of Spokane Valley envisions to boost tourism and retail activity, one city official says.

The city of Spokane Valley is planning a two-story, $10 million addition to the Spokane County Fair & Expo Center, with the goal of boosting tourism and retail spending.

The investment is one of several the city has on the slate in hopes of increasing retail activity and tourism, says Mike Basinger, economic development manager with the city.

As envisioned about 32,300 square feet of space is to be added to the existing 93,000-square-foot expo center, located at 404 N. Havana, on the western edge of Spokane Valley, he says.

On the ground floor, 16,000 square feet of exhibit space is planned, roughly 4,000 square feet will be dedicated to a sit-down restaurant and brewery with outdoor seating, and updates will be made to the 2,000-square-foot lobby area, he says.

“We’re really focusing on capturing the people already at the fairgrounds for existing events,” although the improvements also will provide services for people working at nearby businesses and industries, he says.

The addition will also include a new 2,500-square-foot administration office, project plans show.

The fairgrounds project is still in the preliminary phases and is awaiting state funding, Basinger says.

Architects West Inc., of Coeur d’Alene, performed the preliminary design work for the addition. No contractor has been selected for the project yet.

The proposed new space will allow larger events to be held at the center, a capability fairgrounds staff have long said is needed, contends Basinger.

“We’d be able to attract and accommodate events that need that trade show and meeting space, and it also provides an opportunity for existing events to expand,” he says.

The new facilities also would provide space for visitors to gather before and after ballgames at the neighboring Avista Stadium, Basinger adds. The city hopes to capitalize on proposed changes to Minor League Baseball scheduling that’s expected to result in longer seasons for the Spokane Indians baseball club.

The city of Spokane Valley has set aside $2.9 million in lodging tax revenue as seed money for tourism strategies, he says.

The city also is pursuing $4 million in state capital funds this year, he adds. The funding request has support from Greater Spokane Incorporated, the Greater Spokane Valley Chamber of Commerce, and Spokane County, all of which have included it among priorities in their legislative agendas.

The remaining funding will be provided through bonds, Basinger says.

If the city receives the state capital funds, it will begin working with the county on final designs for the project. Once work has started, the facility improvements would be online within two years, he estimates.

The county operates the fairgrounds as an enterprise fund, meaning that whatever money the facilities bring in is what’s used to maintain and operate it. The additional space could bring in more events, meaning more funding for the facility, which is expected to operate at a profit following improvements, while also boosting spending in the city, functioning as a win-win for both parties.

Preliminary estimates show the addition could result in an additional $3.9 million annually in visitor spending and an increase of about $33,000 in annual sales tax revenue for the city.

In 2015, the city hired Seattle-based Community Attributes Inc. to analyze the state of retail in the city and determine what opportunities were present for retail growth, says Basinger.

Food and beverage service and lodging were found to be underprovided in Spokane Valley, while performing arts and spectator sports also have room for improvement, he says.

From these studies, ideas for several projects were born, in addition to the expo expansion.

They include investments in the whitewater and waterfront parks, where the city recently purchased property just east of North Flora Road for whitewater rafters to launch in the Spokane River and performed improvements to the take-out about a mile downstream near North Sullivan Road, says Basinger.

The city also is planning an outdoor sports complex, but a location for it has yet to be determined, he notes.

An expansion of the west lawn at CenterPlace Regional Event Center also was recently completed, he adds.

Additionally, the city is planning improvements to Balfour Park, across Sprague Avenue from City Hall. A new library also is being planned on the same block as the park expansion, he adds.