During pandemic, many supporters ‘stepped up’ 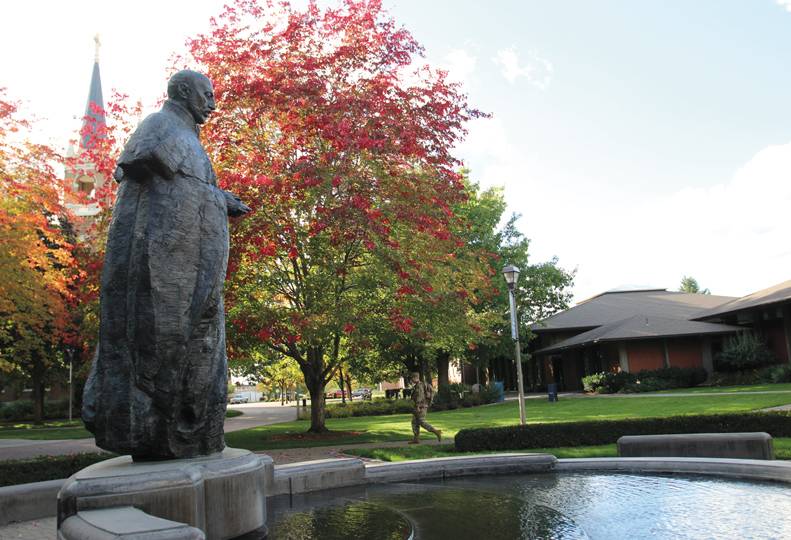 More than 10,500 donors helped to make it one of the biggest years for fundraising outside of a financial-campaign year, Geldien adds.

“We had tremendous costs associated with the pandemic,” he says. Gonzaga was one of only a few schools within the region to offer on-campus learning, doing a hybrid approach.

“It was a time of uncertainty that none of us had ever experienced. We had our alums and benefactors step up in a major way,” Geldien adds.

Of the thousands of donors, three families make up 18% of donations: The Payne family, the Regis family, and the Reed family.

Terry and Pat Payne, of Missoula, Montana, donated $5 million, which will provide successive cohorts of high-achieving, low-income students with the financial support necessary for them to obtain a Gonzaga education, says Holly Jones, advancement communications specialist.

Terry Payne is an alumnus of the University of Montana and built Missoula-based PayneWest Insurance Inc., which has a presence in Spokane. His company ranks among the “100 Largest U.S. Brokers” and was named among the “Best Places to Work in Insurance” for the past four years by Business Insurance.

“What inspires me further is the overall atmosphere of the Gonzaga University campus—the quality and cleanliness of it, the cheerfulness, friendliness, and attitude of the students,” says Payne in an article published by the university.

Gonzaga has a total current enrollment of 7,295 students, 4,852 of whom are undergraduates. According to the school’s website, 98% of students receive financial aid.

Annual tuition at Gonzaga is $47,600. Additional expenses include estimated averages of $13,200 for on campus room and meals and $5,900 in transportation, books, supplies, and other fees. In total, the annual unsubsidized cost for an undergraduate student is $66,700, according to the school’s website.

Gonzaga President Thayne McCulloh, says, “We are keenly aware of the fact that what we try to do is expensive. We want people to know we are committed to doing it as well as we possibly can. And aspiration to excellence is something people really get behind.”

The Paynes’ gift is intended to assist low-income students from Washington, Idaho, and Montana. Scholarships to these recipients will be awarded annually from their first year until graduation.

The Paynes have a long history of charitable giving to Gonzaga, exemplified by The Payne Center for Leadership Development at the university.

In their home state of Montana, they’ve funded The Payne Family Native American Center & Elouise Cobell Land & Culture Institute, at the University of Montana, and committed a significant gift to help fund the planned American Indian Hall, at Montana State University, in Bozeman.

Another large gift to Gonzaga came from Dan and Cecelia Regis of Bellevue, Washington, who donated $2 million to the university to establish the Jud Regis Chair of Accounting. The endowed position is named to honor Dan’s father, Jud, who grew up in Spokane, where Dan was born, and is credited with instilling the values of faith, family, and freedom to Dan and his siblings.

“A man of faith and principle, he gave us the example of a purposeful, fruitful life entirely within the spirit of the Jesuit tradition,” says Dan Regis of his father.

The Jesuits have a 500-year history of education, starting with St. Ignatius in the early 1500s.

Geldien explains, “A Jesuit education is about discernment. It’s about educating the whole person. There is a saying, ‘Don’t do good, do well.’ So those who go out and are financially successful, they are instilled here to give back, to do well for others.”

McCulloh adds, “I do absolutely believe that benefaction is driven by a desire to help us live out our mission. And our mission is an unapologetically values- and faith-based mission.”

Gonzaga’s School of Business Administration was founded in 1921 to help stock a fledgling city with business leaders, bankers, accountants, and professionals in economics, finance, and trade.

Gonzaga’s accounting program within the school of business is ranked 31st in the U.S. News & World Report’s 2022 business school rankings.

Of the Regis gift, $1.75 million endows the chair and supports professional development, research opportunities, stipends, and salary in perpetuity.

“They help elevate the brand of the school of business and position within the academy,” he says.

Reed says in a written statement, “If we all come together, we can make these programs a cut above every other one out there.”

The new Bollier facility adds 82,000 square feet of space dedicated to student learning in the sciences, engineering, and math on Gonzaga’s campus.

McCulloh adds, “We are an institution that has been very informed over the years by trying to pay attention to the contemporary needs and desires of the culture.”

He cites as an example the business school’s early history and the role that the School of Engineering played in the Pacific Northwest when the hydropower industry was in need of expertise to construct large projects that could support energy production.

“The realities of environmental degradation and the challenges that are coming … are ones that many of our students are coming to us and saying, ‘I want to be part of the solution,’” McCulloh adds.