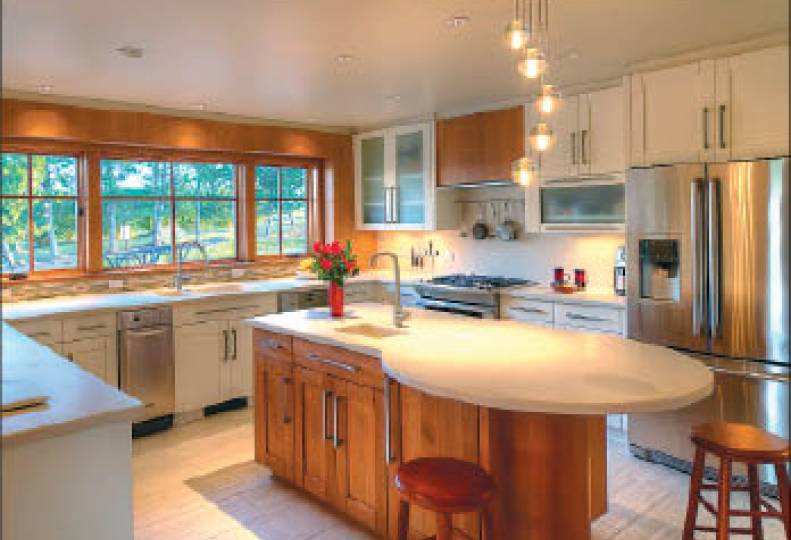 A miniature historically styled home that sits in the front window at the offices of Hanson Carlen Construction Inc., at 112 S. Monroe, says a lot about the philosophy of the residential design-build company, which specializes in upscale projects.

His son, David, one of three third-generation builder-owners who now operate the company, says, "I call it Dad's last house."

He says his father spent about 1,000 hours on the project, which typifies the effort he has put into every full-scale construction project he's tackled during his life.

"From my early childhood, I always wanted to be a builder like Dad," Hanson says.

"Dad's real thing was being a craftsman and putting your all into something," he says, adding that the company's current owners cherish and are committed to carrying on that quality-over-quantity legacy.

"It's engrained into who we are and who we want to be," he says.

The "Old World Craftsmen" descriptor that Hanson Carlen uses in a lot of its marketing materials is one example of that hard-hammered focus.

It currently has six full-time permanent employees—it touts itself as one of relatively few construction firms here that have an architect on staff—and at peak times in the past has employed as many around double that number, Hanson says.

Along with Hanson, the company's other owners are his older brother, Tom Hanson, and brother-in-law, Dana Carlen, who's married to his sister, Jean.

Heading up the creative design side of the business is Ryan Ruffcorn, a registered architect with about two decades of experience in residential projects throughout the Northwest who joined the company about five years ago. David Hanson's wife, Kimberly, handles the company's accounts payable and receivable, along with various other office and secretarial duties.

Along with its downtown headquarters, the company has an office and shop located along Swenson Road, between Deer Park and Suncrest.

Despite Hanson Carlen's small size, its work has captured national recognition. It recently won recognition in the national Chrysalis Awards program for its entry in a category encompassing bath remodels costing more than $60,000, and it last fall won a national award through a Qualified Remodeler magazine-sponsored competition in a category for kitchen remodels costing $50,000 to $100,000. In 2009, it was named to what Remodeling magazine calls its annual Big50 List, recognizing companies that exemplify high industry standards. It earned the recognition in a "Fine Design" category honoring builders found to have high aesthetic standards for their projects.

Hanson prefers not to disclose the company's revenues publicly. He says, though, that the company had its best year in 2009 and its worst year in 2010, with some improvement last year and a stronger rebound so far this year.

"We're noticing things are picking up. Things are on the mend," he says.

What's different now, though, he says, is its project mix. It used to be pretty evenly divided between new-home and remodeling projects, but remodels now constitute about 75 percent of the work the company does. Hanson says he expects that to continue for the foreseeable future, due partly to the big gap between currently depressed sale prices for existing homes and the cost of quality new construction.

Hanson manages the office and oversees the company's sales. Clients work with him from the initial point of contact through design and estimating, to the start of production. After a contract is signed, hands-on builders Tom Hanson and Carlen work with the clients daily throughout the construction stage.

"We still do all of the carpentry in-house," rather than hiring it out, Hanson says. "We're kind of throwbacks in the way we do things."

Ruffcorn works with the clients during the design to ensure the projects reflect their various lifestyles, tastes, and budgets.

Hanson Carlen has built and remodeled homes for prices ranging from about $180 to $600 per square foot, with an average price of probably around $220 a square foot, and new homes ranging in price from around $500,000 to $1 million, Hanson says.

For remodels and additions, he says, "We don't do much under $100,000 because that doesn't buy you a lot anymore" when using custom design services and high-end materials and finishes. He adds, "We'll do $300,000 remodels fairly frequently. That isn't unusual at all."

A typical project will take from three to seven months.

These days, Hanson says, most new homes are a "stamped-out, cookie-cutter kind of thing," and perhaps as few as 5 percent are custom designed architecturally, which he contends is what makes those homes special.

Hanson Carlen brought on Ruffcorn and began specializing in design-build projects out of a desire to eliminate some of the common frustrations that occur when designers and builders aren't on the same team, Hanson says.

"It seemed like architects and builders were always enemies. There was a frustration from the outset with architects, and it was that they're clueless about cost," he says.

And for clients, he says, "It didn't seem like it always ended with a good feeling. It shouldn't be that way. (There should be) no surprises. I always tell clients that our goal is to be friends at the end."

The company notes in its brochure that the design-build process enables the owner, or client, to contract with one entity, the design-build team, which it asserts results in reduced owner risk and lower design and construction costs.

In a traditional design-bid-build process, the owner has separate contracts with the architect or designer and the contractor, which requires the owner to serve as problem solver or chief negotiator when problems arise between the parties.

Hanson Carlen's origins date back to the 1930s, Hanson says, when his grandfather, Ray, began building homes in the Midwest. His father, Dewey, and uncle, Lyle, began working alongside their father in the 1940s.

Dewey Hanson moved his family to the Spokane area in 1975, started his own construction company here, then named Hanson Construction, and hired Carlen a short time later, David Hanson says. Carlen acquired ownership interest in the company after a few years, and the company changed its name to reflect the expanded ownership, he says.

Hanson says his father's company initially was involved in a variety of projects, from building one of the office buildings on the Tapio Office Center campus at 104 S. Freya to a number of homes it constructed speculatively, but soon began doing mostly custom residential projects. He says he and his brother grew up in the business and learned it from their father.

Despite Hanson Carlen's upscale focus, the company doesn't promote a bigger-is-better philosophy. To the contrary, Hanson says, the message it prefers to convey is that, "A well-designed space is better than a big space."

Of its quality-over-quantity emphasis, he says, "It's really hard to grow with that model of business. When (the economy) was booming, we didn't boom. Our goal isn't to become a mass producer of anything."

The dip in revenues was disappointing, Hanson says, but he adds that the company has "a lot to be thankful for," and says he prefers to dwell on its "three-quarters full (status) rather than what you're missing out on."

Rather than focusing on the project mix, he says, "I want to do work that challenges us, design-wise or craftsman-wise. That's what's in our soul."