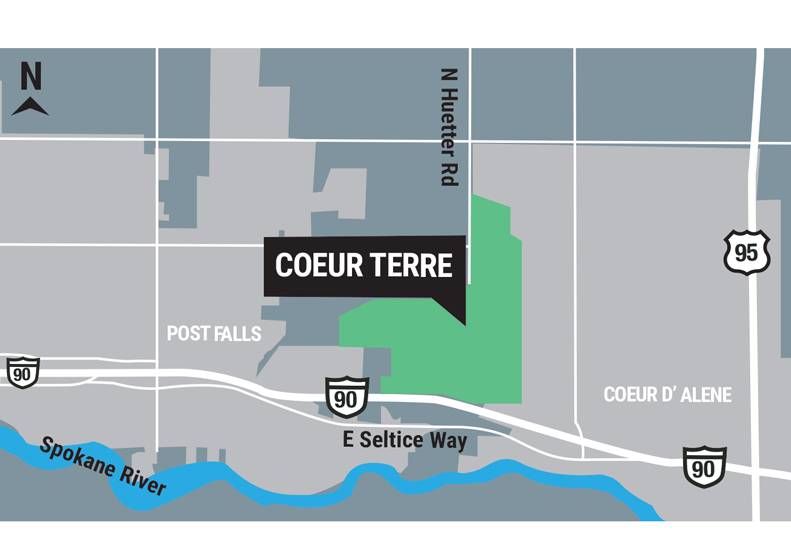 Lakeside Capital Group LLC has set its sights on a massive new development with over 1,000 acres of property between Coeur d’Alene and Post Falls.

Under its Kootenai County Land Co. subsidiary, Lakeside plans to build a residential community, dubbed Coeur Terre, for over 4,500 residents in what is rumored to be 2,000-plus units on land it acquired late last year, according to recently posted marketing materials to the company’s website.

A representative of the development couldn’t be reached immediately for comment.

In September 2019, Hemmingson’s Lakeside Real Estate Holdings IV bought roughly 1,040 acres of property from longtime bluegrass farmer Roy Armstrong. The property straddles Huetter Road, between the cities of Post Falls and Coeur d’Alene, and is bounded by Poleline Avenue to the north and Interstate 90 to the south.

The property is currently located in unincorporated Kootenai County. Bob Seale, community development director for the city of Post Falls, says the property isn’t annexed into either city, but portions of it are within both cities’ designated areas of city impact boundaries, which are areas the respective cities are expected to annex as they grow. Documents on the company’s website state the developer is working with the cities on annexing the property.

Seale says it’s unclear if the developer plans to divide the development between cities or whether he intends to request that one city annex the entire development site.

The land was rezoned by Kootenai County early this year under the “transitional” land-use designation. It formerly was zoned for agricultural use and was long used for bluegrass farming.

“It basically means we don’t exactly know what’s going to happen out there,” says Seale.

The developer is exploring a mixture of single-family and multifamily uses, he says.

The zoning designation also allows for up to 10% of the property to be used for commercial purposes, Seale adds. Only about 20% of the total acreage can be multifamily, according to city documents.

Also included in the plans are a recreational building and swimming pool, fields for baseball and soccer, and courts for tennis, basketball, pickleball, and bocce ball.

According to the promotional materials on Lakeside’s website, the communities also will include coffee shops and walking and biking trails that connect to the regional trail network.

The website doesn’t include the number of residential units planned, but Seale says 2,000-plus units would be reasonable considering the acreage of the property and the intended zoning.

No timeline is indicated for the project. Seale says a development of this size likely would take place in phases over several years.

Jon Manley, planning manager with the city of Post Falls, says, to his knowledge, the developer hasn’t yet submitted planning documents to the city. He directed all further questions to a representative of Architerra Homes, who couldn’t be reached for comment.

Lakeside has been busy acquiring additional land since its massive September 2019 purchase. Kootenai County Assessor’s Office records indicate in total, the company has acquired another roughly 280 acres between Coeur d’Alene and Post Falls, bringing its total acquired land in the last year to over 1,300 acres.

The developer also has announced recently another community to be located just northwest of the proposed Coeur Terre development in Post Falls, dubbed the Parkllyn, which also is being built by Architerra Homes.

The multiphase Parkllyn community will boast over 400 lots with an array of home types, according to information on the company’s website. That development will be located immediately east of the new Prairie View Elementary School, a map of the proposed development shows.

Work on that was expected to begin in the current quarter of 2020. As of the Journal’s press time, no permits had been applied for with the city of Post Falls for the development.

Lakeside also has proposed an extension of its Trails development, a 76-lot residential development located just to the southwest of the existing 450-unit-plus Trails development. The extension, dubbed the Enclave at the Trails, is expected to be developed on 19.4 acres of property that were included in the 1,040-acre purchase last September on a portion of land that is within Coeur d’Alene, city of Coeur d’Alene planning commission documents show.

Altogether, the Coeur d’Alene-Post Falls area could see upward of over 2,500 new residences developed by Lakeside in the coming years. Kootenai County Land Co. has developed over 1,800 units in five communities thus far.

In addition to the Lakeside developments, a 650-unit development at the Crown Pointe community is nearly complete in Post Falls, while the Tullamore Planned Unit Development is building 383 single-family homes and about 520 multifamily units.