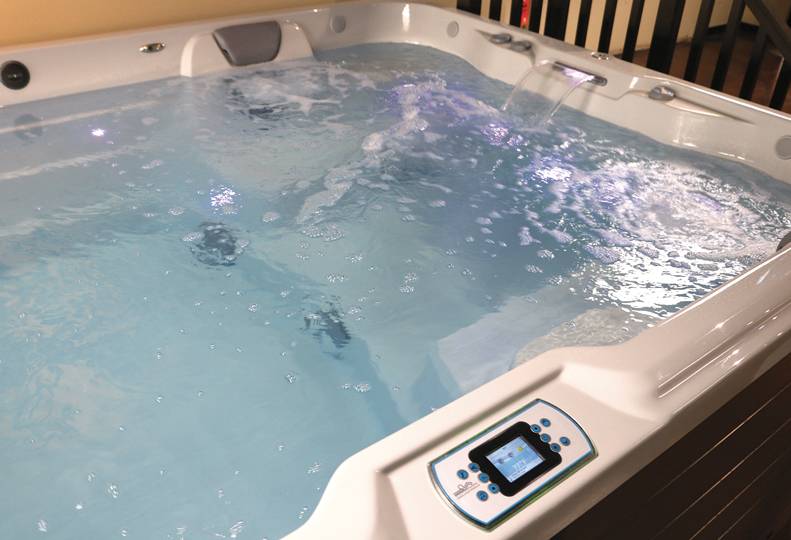 -Kevin Blocker
A floor model at a Pool World store in Spokane Valley gives patrons a glimpse of what they could get delivered months from now.

Many trying to buy hot tubs right now aren’t feeling so bubbly due to a lack of production and increased delays in build time on the part of manufacturers.

Hot tub retailers say continued restrictions on the public’s ability to congregate and travel due to COVID-19 restrictions have left a lot of consumers thirsting for a residential spa.

Sam Genzone, a hot tub and spa sales manager at Country Homes Power Equipment Inc., at 8108 N. Division, in north Spokane, says he feels like he’s living in the days of the wild, wild, West.

“More than once, we’ve seen couples come in, climb into a hot tub, wait for a sales rep to approach and try to claim the tub,” Genzone says.

Sales representatives in the hot tub industry across the region say the manufacturing of hot tubs ended altogether earlier this year when facilities closed due to government stay-at-home orders to contain the spread of the coronavirus.

“There are some who come in and want it right now and we’re telling them they’re going to have to be patient,” he says.

Caleb O’Bannan, the sales manager at the Pool World Inc. store located at 5701 E. Sprague, in Spokane Valley, says, “Before the pandemic, it used to be that if I told someone it was going to be 1 1/2 months out before they’d get their order, the response would be, ‘I can’t wait that long.’ Now, if I told them that, they’d kiss me,” he says.

O’Bannan says an order placed at Pool World now– could take anywhere from two to five months to arrive, depending on the make and model of the hot tub.

A veteran sales representative of the hot tub and pool industry, O’Bannan says he’s never seen delay times like he has now.

When the pandemic arrived in the U.S., the overwhelming majority of hot-tub manufacturers experienced shutdowns of four to eight weeks due to stay-at-home orders issued by their respective state governments, he says.

Deemed an essential business in the state of Washington, in part due to the fact Pool World company sells disinfecting and sanitizing products, the company saw a surge in sales from customers who were stranded at home, he says.

“For hot tubs specifically, we’ve seen an increase in sales of over 45% over last year,” O’Bannan says. “We’ve sold nearly all of what we had in stock.”

But once manufacturers re-opened, they had to contend with a backlog of already existing orders that needed to be filled while facing a newfound wave of demand in the product, O’Bannan says.

“People have decided to do home improvements with these low interest rates and are making their homes, where they feel safest and have to be most of the time, more comfortable,” he says.

In addition to its Central Spokane showroom on East Sprague Avenue, Pool World has stores at 13524 E. Sprague, in Spokane Valley; at 9111 N. Country Homes Blvd., in North Spokane; and at 745 W. Appleway, in Coeur d’Alene.

It’s not just hot tubs that are surging in pandemic-related demand.

At Accent Fireplace & Spas, at 1622 N. Division, north of downtown Spokane sales manager Cori Newlund says the fireplace side of the business began heating up earlier than normal.

A hot tub purchase at Accent Fireplace & Spas at the moment wouldn’t be ready until between January and March of 2021, Newlund says.

“July is typically a down month for us when it comes to hot tubs,” she says. “That wasn’t the case this year. Our numbers were up 77% above normal for that month. People aren’t vacationing and going out as much, so they’ve got extra money.”

In addition to the high demand for hot tubs, the presence of COVID-19 has put a strain on manufacturers who build accessories and spare parts for hot tubs.

Potter says the company’s primary customers are those who need new covers for their tubs.

“Over the course of a life of 15 to 20 years, a hot tub owner is typically going to have to replace their cover, two, three, maybe even four times,” he says.

“Ours is a hand-made product that takes at least six months to fully train a new hire,” he says.

Mark Bogusky is the marketing director for Blue Falls Manufacturing, a manufacturer near Edmonton, Alberta, that makes hot tubs for its Arctic Spas subsidiaries.

With an Arctic Spas at 11604 E. Indiana in Spokane Valley, Bogusky says the Blue Falls plant has added employees and installed a second robotic arm in an effort to fulfill a backlog of orders.

“We really didn’t know what was going to happen when COVID arrived,” Bogusky says.