How angel investors earn their wings

More than 100 individuals involved in Spokane group, but more are sought 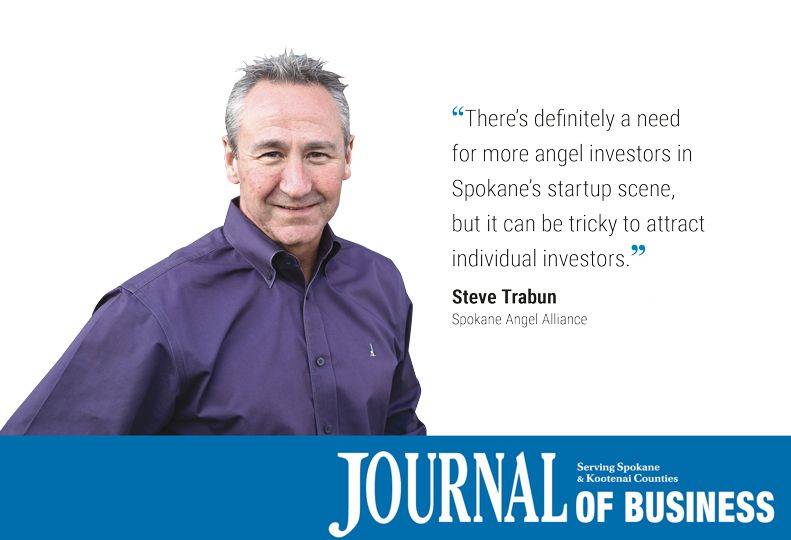 In recent years, Spokane has seen a handful of local startup companies grow into successful ventures resulting in benefits for both their founding entrepreneurs as well as early investors.

Those who follow news of startup successes may have wondered what it takes to become an investor in a startup company, and how best to ensure their investment yields a return.

“In order to invest in a startup, one must first qualify to be an accredited investor, also known as an angel investor,” says Steve Trabun, regional business manager for Avista Corp. and chairman of the Spokane Angel Alliance.

Trabun says the U.S. Securities and Exchange Commission defines an accredited investor as an individual who has either a net worth of at least $1 million, excluding the value of one’s primary residence, or annual income of at least $200,000—or $300,000 if married—each year for the last two consecutive years.

“There’s no formal process to become accredited, but all investors are asked at some point to sign a document attesting that they meet those qualifying factors,” he says.

Trabun says connecting accredited investors with startup companies is one of the main purposes of the Spokane Angel Alliance.

“The SAA is a network of over 100 accredited investors, who meet regularly to hear about young companies and evaluate investment opportunities,” he says. “We know we have enough individuals here who meet the criteria, so it’s mostly a matter of educating them about the process and attracting them with startups whose product or vision is appealing.”

Trabun says he advises individuals who are interested in startups begin by joining the SAA, and attending one of the organization’s six annual presentation luncheons, at which between 12 and 18 new startups pitch their ideas.

“In presenting, the entrepreneur’s goal is to generate enough interest to persuade investors to write checks,” he says. “When enough investors are interested, the group will typically choose a lead investor to act as a spokesperson in the next step of the process, negotiating terms.”

Trabun says angel investors are typically part of the early investment portion of the five-part funding process through which startup companies grow.

“Most startups begin with just a functional prototype, so some of their initial investment is likely going to go toward further development,” he says. “Angel investors are generally wealthy individuals, who are willing to invest in research and development.”

While there is no set rule on how much money an investor can put into a startup, Trabun says most entrepreneurs begin by asking investors to contribute toward the minimum investment amount their company will need to get started.

“Entrepreneurs usually have a minimum goal amount in mind, but most will be pushing to exceed that,” he says.

While SAA members usually make their own individual investments, Trabun says the SAA also has a dedicated family of funds, called Kick-Start, from which it makes investments.

“Kick-Start sets an initial funding goal that helps young companies get started,” he says. “Generally, they’re led by one established investor who helps to encourage others to invest and help that particular startup to grow.”

Trabun says a big part of the funding process is the negotiation between the entrepreneur and investors on the valuation of the startup company.

“Valuation is determined by either the revenue the startup has already generated or an estimated prediction of what it will be able to make,” he says.

To aid in estimating valuation, Trabun says the entrepreneur is responsible for providing investors with certain information as part of what’s called due diligence; a comprehensive appraisal of a business, to establish its assets and liabilities and evaluate its commercial potential.

“The more due diligence one can establish, the more likely it is you’ll see a reward,” he says. “But it can take time to really dive in to all those figures, so investors have to be willing to ask questions and work to understand the entrepreneur’s goals.”

Ultimately, Trabun says, the agreed-upon terms will depend on how much money the entrepreneur is seeking to raise, the amount of due diligence they’re able to provide, and the level of interest from investors.

Trabun says many angel investors are current or former entrepreneurs who have been through the startup funding process and understand how it works.

“Most are motivated both to help other young companies succeed, as well as by the potential rewards they may gain through investing,” he says. “Some invest in industries they’re familiar with, or companies they have a hunch will do well in the future, while others simply invest in ideas they find interesting.”

According to Trabun, in the past five years the SAA has invested over $26 million into 35 companies, and those companies have gone on to raise a further $155 million and created over 1,000 jobs.

However, he says in most cases, only 20 percent of potential investors who attend SAA presentation luncheons actually commit to investing in new startups.

“There’s definitely a need for more angel investors in Spokane’s startup scene, but it can be tricky to attract individual investors,” he says.

He says part of that difficulty may be due to the fact that, in addition to having sufficient capital to invest, angel investors also need to have a willingness to accept risk.

“Startups are high risk, so you’re going to need a passion or affinity for investing in high-risk business ventures,” he says. “We always try really hard to educate investors that only one in 10 investments will actually pay off.”

Trabun also cautions that it can take years for an investment to begin showing returns.

“Most investors are looking for substantial returns, but it can take a long while for returns to come through on a start-up investment,” he says. “Your investment is there until the startup either goes bankrupt, or is acquired by a larger more established company.”

Trabun says the most successful angel investors are those who also are willing to diversify their portfolio by making investments in multiple startup companies.

“It’s a volume game, meaning the more you diversify, the more likely you are to see returns on your investment,” he says. “In some ways, startup investments are a bit like gambling, only you’re trying to minimize the luck aspect through due diligence and investor influence.”

Local entrepreneur Erik Nelson is the founder of Tidy-Hut Inc., a startup developing a “non-disgusting” portable toilet for festivals and public events.

As part of developing his company, Nelson says he’s known and worked with many angel investors through programs and events at Startup Spokane, Ignite Northwest, and CoMotion Labs.

“I’ve been through StartUp Spokane’s programs and events as well as Ignite Northwest’s innovation accelerator program, and I regularly attend events at CoMotion Labs,” Nelson says.

Startup Spokane is a program of Greater Spokane Incorporated, that’s housed in a location called Share Space, at 610 W. Second, and serves as an entrepreneurial and small business service center.

CoMotion is the University of Washington’s collaborative innovation hub, which expanded last year to include a Spokane-based program called CoMotion Labs at Spokane.

Nelson says he recommends potential angel investors start by listening to podcasts on investing, joining the SAA, and attending events hosted by the three programs listed above.

“I’d say learn as much as you can, and come to local events so you can network with up-and-coming entrepreneurs,” he says. “Ask them about their idea, listen to their pitch, provide feedback, and ask questions.”

Like Trabun, Nelson says that the biggest thing new angel investors should be prepared for is understanding that not all their investments will be home runs.

“One needs to understand that perhaps four of their five investments will either fail or produce marginal results, but that the fifth one will most likely do great and make up for the other four,” he says. “The best angel investors are those who understand a particular market and invest in startups operating in that space.”

“Investors need to know some of the same concepts entrepreneurs need to understand, so attending entrepreneurial activities can go a long way toward helping starting investors to develop a critical eye,” he says. “Other angel investors also are happy to share their wisdom, and guide newcomers.”

He says angel investors also should be prepared to offer guidance to the startups they’re invested in.

“Many investors want to invest in startups they can contribute and add value to,” Ryan says. “That means not just investing cash, but being able to serve as an advocate and advisor to the entrepreneur, providing them with contacts, and helping their company to succeed.”

Looking ahead, Ryan and Nelson say they’ve been collaborating on ideas for how to increase local awareness about the angel investing process.

“We do see a need for more investment education here in Spokane,” says Ryan. “So we’re working to develop a kind of investor training course that might help encourage some of those high net worth individuals to become active investors.”

Nelson says the two have already seen support from local shareholders as well as the SAA and hope to have a course set up within the next few months.