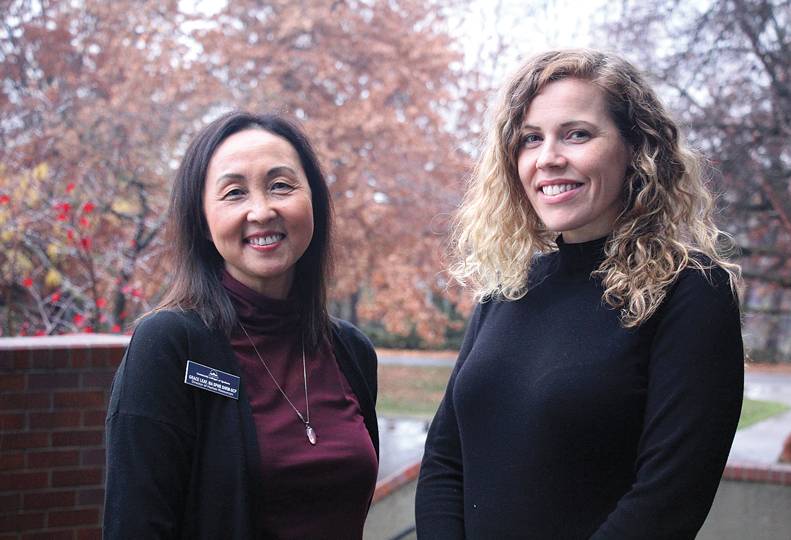 -Virginia Thomas
Grace Leaf, left, hired Grainne Curtin earlier this year at Community Colleges of Spokane. Curtin is one of 240 people hired by the organization so far this year.

Human resources professionals here say recruiting has become of greater emphasis as they face a workforce market that favors job candidates at a time when many people are changing jobs or leaving the workforce altogether.

“Even before COVID, recruiting had taken a pretty good chunk of our time because the unemployment rates were low,” Cameron says.

Typically, recruiting has been a significant part of the workload for human resources departments, Cameron says, but it hasn’t always been as much of a focus as it is today.

“Recruiting is a segment of what we do, but it’s definitely not all we’re doing,” Cameron says. “A good HR professional is behind the scenes with their fingers in everything—workplace safety, workers’ compensation, benefits, budget.”

Workforce issues due to the pandemic have accelerated the need for human resources departments to focus on recruiting, Cameron says.

Lindsey Skinfill, vice president of human resources and culture at Numerica Credit Union, says Numerica recently added an employee to its human resources department, bringing the total number of employees in the department to 10, four of whom are full-time recruiters.

“It’s been all hands on deck,” Skinfill says. “Anyone on the HR team, if their schedule is open, they can expect to do some interview panels.”

The whole team helps with pre-hire paperwork, onboarding, and benefits enrollment, she says, adding, “It’s become a much bigger focus for all of us in the last year.”

Laura Vickers, director of culture, diversity, and people services at Avista Corp., says retirements have created more hiring work for the human resources department at the utility company. According to Avista’s 2021 corporate responsibility report, 20% of its employees are baby boomers, aged 57 to 76.

“In 2021, we have more retirements than we’ve had in the last three years,” Vickers says.

For the combined industries of transportation, warehousing, and utilities, the 2020 national turnover rate was 59.5%, the U.S. Bureau of Labor Statistics’ reports.

Most employees who leave Avista now are retiring, Vickers says. Prior to the pandemic, about half of departures were due to resignations or terminations.

Vickers says that while Avista hires from within as much as possible, the need for outside recruiting has increased as a result of the increase in retirements.

Cameron says some companies outsource their recruiting to staffing companies. For other companies, all recruiting duties fall to one person.

Grace Leaf, director of human resource employment services at Community Colleges of Spokane, says recruiting has become noticeably more competitive from an HR point of view, while the field of candidates has become less reliable.

“Anecdotally, I can tell you that people have come on board, and some have quit a week in or a month in because they got a better offer,” Leaf says. “We didn’t used to experience that.”

As of mid-November, the organization had hired 240 people, Leaf says. That’s up from 156 total people recruited in 2020.

The current environment has led CCS to think more carefully about its hiring processes, Leaf says.

“In a state higher ed organization, there’s a lot of value put on committees and shared governance. Sometimes we’re too attached to the steps and the process,” Leaf says. “We can’t take three months to hire a faculty member anymore.”

Curtin has personal experience with the employment waiting game. She moved here earlier this year and says she still hasn’t heard from companies regarding jobs she applied for up to six months ago, before she was hired at CCS.

“It’s all about being clear with applicants, and not having them sit and wait,” Curtin says.

Skinfill says Numerica has started to move away from traditional interview styles in order to avoid scaring away some candidates who might be intimidated by the process.

“We try to understand that people have different thinking and communication styles, so we typically send out half of our interview questions ahead of time,” Skinfill says. “Before your interview, you have time to prep and understand the kinds of things we’ll ask.”

Leaf says CCS is working to change the perspectives of those involved in hiring. The organization offers search advocate training both internally and to other organizations.

Search advocates help hiring managers and search committees while promoting a focus on diversity, equity, and inclusion throughout the recruitment and hiring processes.

Curtin says the aim is to help those involved in the hiring process to be more aware of their preconceived biases.

“We’re trying to promote behavioral-based questions,” Curtin says. “We understand that you can teach somebody to do most jobs, but you can’t teach somebody how to be a certain type of person. We’re trying to teach our chairs to not just focus on the skills … but actually focus on (the candidate) as a person and whether they’ll fit into the team.”

“It’s taking more time and energy for us to do the same recruitment,” Skinfill says.

Skinfill says Numerica’s human resources team realized that some people—those who already have a job, or those who struggle to find child care—may be unable to attend a hiring event during the day.

“We’ve done three of those. From the first one, we got nine new hires,” Skinfill says. “The second one, we got 15. We just did a virtual hiring event, and we have 15 offers going out.”