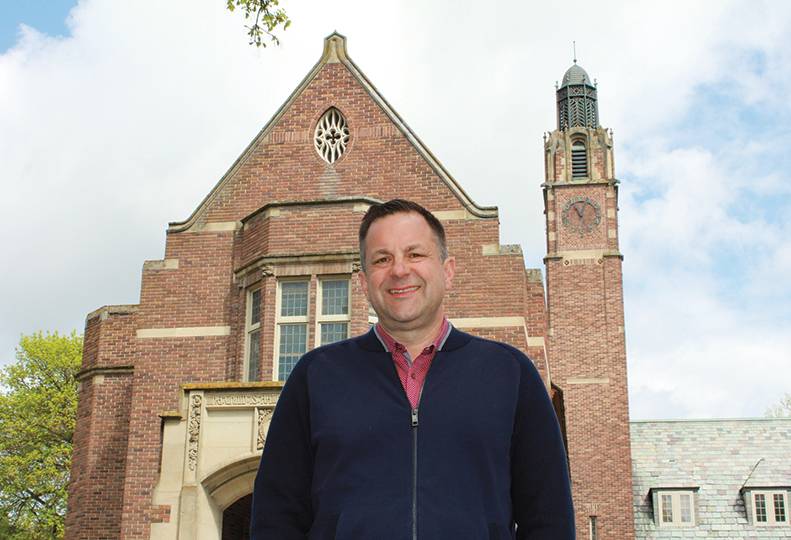 -—Sandra Hosking
Chud Wendle is the Hutton Settlement’s fifth executive director since its inception 100 years ago. He started with the organization in 2016.

When Idaho mining mogul Levi Hutton established the Hutton Settlement in Spokane Valley 100 years ago, he set up a business model that he hoped would sustain the home for orphaned children for at least 250 years.

Then, the settlement was supported by earnings from real estate holdings that included the Hutton Building, the Fernwell Building, City Ramp Garage, and a small building at Second Avenue and Washington Street.

The organization since has sold those buildings but continues to sustain its nearly $2 million annual budget through its real estate portfolio of 19 Spokane-area properties, which accounts for between 80 percent and 90 percent of its funding. It also receives grants and donations, yet no government funds, says Chud Wendle, the organization’s fifth executive director since its inception.

Since joining the Hutton Settlement in 2016, Wendle has strived to continue Hutton’s vision.

“It is daunting and a little bit intimidating, but what Levi had done in the execution and setup of his vision to make sure it was taken care of,” he says. “It is pretty exciting to be in this role, to take that vision and see that it is fulfilled. It is definitely exciting and rewarding.”

Wendle has a history with the organization, as his mother, Carol, had served on its board for 35 years, and he participated in Hutton activities as a child.

The Hutton Settlement, which is located at 9907 E. Wellesley, sits on 320 wooded acres and includes five buildings and a barn. At any given time, about 30 youths between the ages of 5 and 18 are in residence. Children might be orphaned or might have a parent or guardian who is unable to look after them.

More than 1,500 children have been served over the past century. About half of the settlement’s residents have been placed there by the state, while the rest are private placements who can remain under the guardianship of their parents or legal guardians, a Hutton fact sheet says.

“Today, we call them ‘social orphans.’ A lot of them are children whose care providers just aren’t able to care for them, and that’s where we can step in,” Wendle says. “The relationship with the provider is critical, especially if it’s a bio parent.”

The facility also has an “active caseload” of former residents aged 18 to 24 who might need temporary shelter or who are in college and need follow-up.

“We’re their family. We’re able to provide support when the need is there,” Wendle says.

Hutton residents are enrolled in West Valley School District. The organization works closely with the schools to ensure success for its children.

“That’s a key partnership since day one,” Wendle says. The children have “an army of support behind them.”

Over the past 10 years, all Hutton residents who have attended high school have graduated, and 95 percent of the settlement’s graduates have enrolled in post-high school programs or service, according to a fact sheet.

With the garden, children work in teams to decide what to grow and nurture it until harvest.

Wendle says one of his biggest “Aha!” moments was seeing how therapeutic tending the garden can be. “If you’ve been a receiver of services, you get into that garden, and, all of a sudden, you see what it takes to plan to nurture and water and grow. It’s been fun to watch that.”

The campus hosts a community meal once a month that serves between 100 and 150 people.

Hutton Settlement employs 21 people at its main campus, which includes house parents, counselors, and other staff members. The organization also has an administrative office in the U.S. Bank Building in downtown Spokane that employs three people, including Wendle. About 210 people volunteer with the organization each year.

In January, Hutton Settlement launched a $6 million capital campaign to update its facilities and invest in staff and programs. By mid-April, the organization had raised almost $4.5 million.

Wendle says he hopes the organization will be able “to pass the finish line” by its celebration in July.

The age of the settlement’s buildings require investment, he says. When the settlement’s residential cottages were built, many children could sleep in one room. Today, the facility is licensed by Washington State, and its rooms are required to be single occupancy.

In 2018, the organization bought property at 3704 N. Nevada in Spokane, which had housed Bates Pharmacy & Medical Supply. It is redeveloping the 15,000-square-foot building to house a Head Start preschool, which will be operated by the Community Colleges of Spokane, Wendle says. The preschool will occupy about 9,000 square feet of leased floorspace, while the rest will be rented.

Head Start is a federal program that provides early childhood education and services to low-income families.

The $2 million remodel is expected to be completed by midsummer and ready to accept students this fall, Wendle says. It will serve about 100 infants, toddlers, and preschool children.

Yost Gallagher Construction LLC, of Spokane, is the general contractor for the project.

“The Hutton Settlement has an amazing and longstanding reputation for serving children in our community,” says Patty Allen, district Head Start director for Community Colleges of Spokane. “It is perfectly aligned with the services we provide.”