Principals of design-build firm, cidery plan to move to new space in January 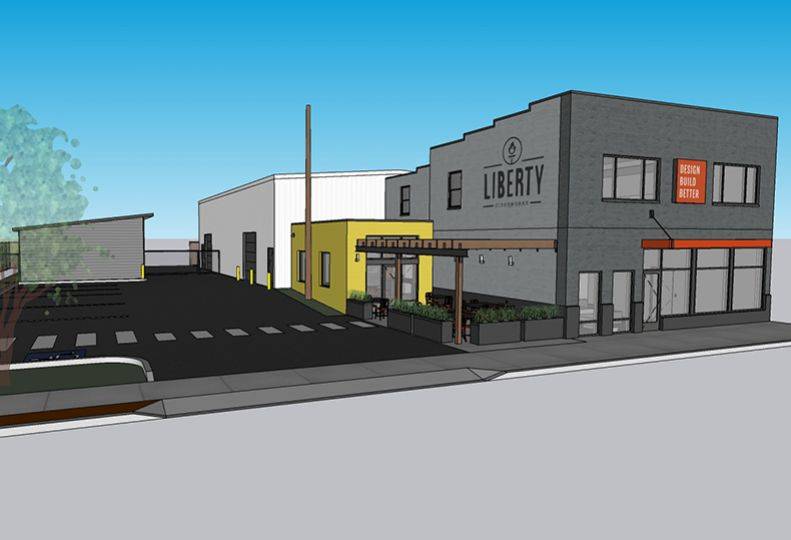 Liberty Ciderworks plans to move its tasting room and facility to a 7,000-square-foot building near downtown that it will share with a design-build architecture and construction company.

Rick Hastings, head cidermaker and co-owner of Liberty Ciderworks, says he expects the business will move in January to 217 E. Third, across the street from Goodwill Industries of the Inland Northwest.

“We see good things on the horizon for the area,” Hastings says.

Lumberbeard Brewing LLC, which opened in late 2019, is located a half-block west of the site.

“Being in proximity to Lumberbeard, there’s some synergy there that we might be able to tap,” Hastings says.

Liberty Ciderworks currently occupies 3,300 square feet of space at 164 S. Washington, about a half-mile west of the planned taproom building.

Hastings says Liberty Ciderworks will triple its space with the move.

“We need a lot more production space than we have,” Hastings says. “We have a tiny taproom, and we’d like to expand that too.”

The tasting room on East Third Avenue will have a covered patio, he says. Liberty Ciderworks currently has nine taps. Hastings says the new location will have a few more, including a couple of guest taps for ciders made by other cideries.

Liberty Ciderworks is building a kitchen in its new taproom space.

“We’ve never had a kitchen before, so we’re … trying to figure out what to include,” Hastings says.

Much of the menu likely will consist of handhelds such as panini sandwiches, he says.

“We haven’t decided yet on the menu, but it will definitely be an opportunity for people to enjoy cider and have some nice food options to choose from to complement their beverage,” Hastings says.

Liberty Ciderworks co-owner Ben Pratt says the two-story building, which previously was occupied by private lender Cogo Capital, is being renovated by the cidery in partnership with design-build company Copeland Architecture & Construction Inc. at a cost of $240,000.

Pratt says he and his wife Jaime, who is sales manager and co-owner at Liberty Ciderworks, formed Third Draft LLC with Copeland partners Austin Dickey and Jeff Fountain to purchase the building in April.

Some walls are being constructed to split the structure into two distinct spaces, as well as creating offices and a conference room on Copeland’s side of the building. The design-build company will occupy 3,900 square feet of office space on the second floor of the building.

Interior demolition work has begun. Hastings says the design-build team expects to receive construction permits for interior renovations soon, and that Copeland hopes to occupy the building as early as August. Copeland currently is located at 121 W. Pacific, downtown.

Because Copeland owns some construction equipment, it needed a warehouse space. Hastings says Copeland and Liberty Ciderworks will share a 3,600-square-foot warehouse adjacent to the main building. Copeland will occupy about a third of the warehouse. Liberty Ciderworks will occupy the remainder of the space with cider-making equipment, including rooms specially built for fermentation and for making ice cider, a sweet cider higher in alcohol content.

•Global Neighborhood Thrift has leased a 21,400-square-foot space adjacent to its current location, at 919 E. Trent and will occupy a total of 44,100 square feet in the same building.

Tenant improvements are planned to convert the space from cold storage to retail and dry storage space. The improvements are valued at $400,000, according to permit information on file with the city of Spokane.