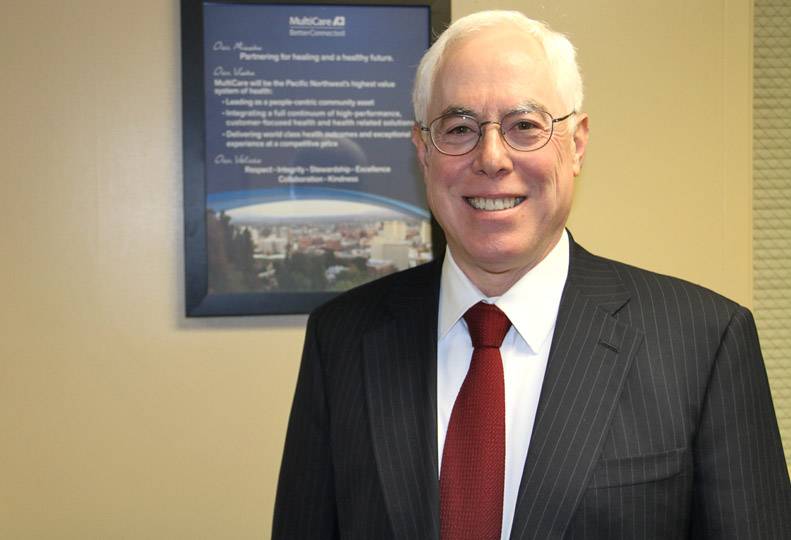 “We’re looking to strengthen leadership here at MultiCare, improve upon our partnerships in the community, and bring the region into an integrated health delivery system,” he says. “We envision an integrated continuum of high-performance, customer-focused care, delivered at an affordable cost.”

Enter O’Brien, a 63-year-old California native, former family physician, and veteran health care executive. Prior to his move to Spokane in July, he served as president of Providence St. Joseph Health, a two-hospital and medical group in Northern California’s Humboldt County.

Before he became a health care executive, O’Brien says he spent 15 years in practice as a family physician, a background that helps him to understand the issues and stresses facing physicians today.

“I have deep respect and admiration for the outstanding physicians we have that provide excellent care, despite these challenges,” he says. “I rely on my medical background to help find ways to make the physicians’ practice more enjoyable and to improve the quality of our care.”

In the months following his appointment, O’Brien says he’s met with staff at each of Rockwood’s newly named main operating entities—MultiCare Deaconess, MultiCare Valley, and MultiCare Rockwood Clinic as well as meeting with community leaders and attending health care events.

“What I’ve found is that the Spokane area is a very welcoming, forward-thinking community,” he says. “That makes it a really good fit for MultiCare, as we’re very much a value driven, community focused organization.”

Driscoll, who serves as the new president of Deaconess Hospital, replaced former CEO Maurine Cate. Repetti, who had been the CEO of Valley Hospital, is now president of that facility.

Blykowski-May currently serves as interim CEO for Rockwood Clinic, but O’Brien says MultiCare is actively searching for a permanent candidate to take over as the clinic’s president.

O’Brien says establishing strong local leaders at each of its Rockwood locations will help MultiCare in its goal of building more community relationships.

“We’re committed to having a local team of leaders that will bond with the community,” he says.

O’Brien says MultiCare already has begun engaging with the community through the support of events, such as Tom’s Turkey Drive, The Bridge to Brunch 5K run, and MedVengers, a scholarship event for medical students at WSU’s newly accredited Elson S. Floyd College of Medicine.

“As a nonprofit, it’s a big priority of ours to develop relationships and make connections that help us not only in our mission to provide care, but also in finding ways to give back,” he says.

“We’d like to work more with the new medical schools so we can help play an active role in the training of future doctors,” he says. “We’re also hoping to partner with other nonprofit organizations to help poor and vulnerable populations, and improve mental health care.”

While strengthening leadership and developing community partnerships are important starting points, O’Brien says MultiCare’s plan to improve the quality of the region’s health care is dependent upon the development of an integrated delivery system.

“These days, the health care industry is moving toward more of a value focus, which means finding the best care, in the best location, at the best time, and at an affordable price,” he says.

He adds, “This community is already well on the path to being able to provide an integrated continuum of care, and our plans to invest in Epic software will move us closer toward accomplishing that.”

Epic systems are used to manage electronic medical records. The system is designed to give patients online access to their health records as well as the ability to manage appointments, pay bills, and email nonemergency questions to their providers.

Epic is the record system currently used at all Providence Health Care facilities, having been introduced gradually to each in 2012 and 2013.

O’Brien says MultiCare plans to invest $25 million to bring the Epic system on line at all of its Spokane locations next year, starting with MultiCare Rockwood Clinic  in March, followed by implementation at MultiCare Valley and MultiCare Deaconess in June.

In addition to its facilities here, MultiCare operates five hospitals on the West Side.