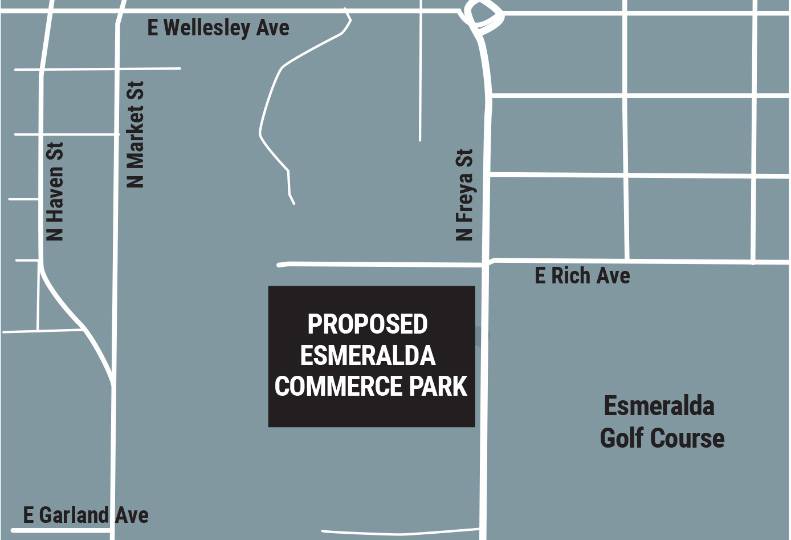 Czapla declines to disclose cost or revenue estimates for the future industrial park.

However, future tenants at Esmeralda Industrial Park are expected to generate 1,000 jobs, “based on what we’ve seen here at Playfair,” he says.

At the proposed Esmeralda park, construction is expected to start as early as spring, at which time developers will focus on building streets, drainage systems, and other infrastructure work, he says, adding that L.B. Stone hopes to begin construction on the first of the buildings in early summer.

Czapla says work likely will be conducted under the design-build delivery method, although no contractor has been selected yet.

“Our plan is to make this look very similar to the Playfair Commerce Park,” emulating the buildings and oversized streets and other landscape aspects of Playfair, says Czapla.

Czapla says L.B. Stone selected the Hillyard property for the planned industrial park development because north Spokane has a significant portion of the population, but much of the recent industrial space has been developed east of the city.

Traveling from north Spokane to those areas makes for a long commute, he says.

“This will bring jobs and good businesses within five miles of the most populated areas of Spokane,” he asserts.

Also, the industrial park will have easy access to the North Spokane Corridor, a portion of which will be constructed just west of the planned industrial park, he says.

The new construction is proposed amid a tight industrial real estate market, in which only 2.4 percent of industrial space in Spokane County is vacant, according to an October survey conducted by Spokane Valley-based Valbridge Property Advisors|Inland Pacific Northwest.

L.B. Stone also hopes to begin constructing in the spring a 100,000-square-foot industrial building at the northeast corner of Sprague Avenue and Fancher Road, two miles directly east of Playfair.