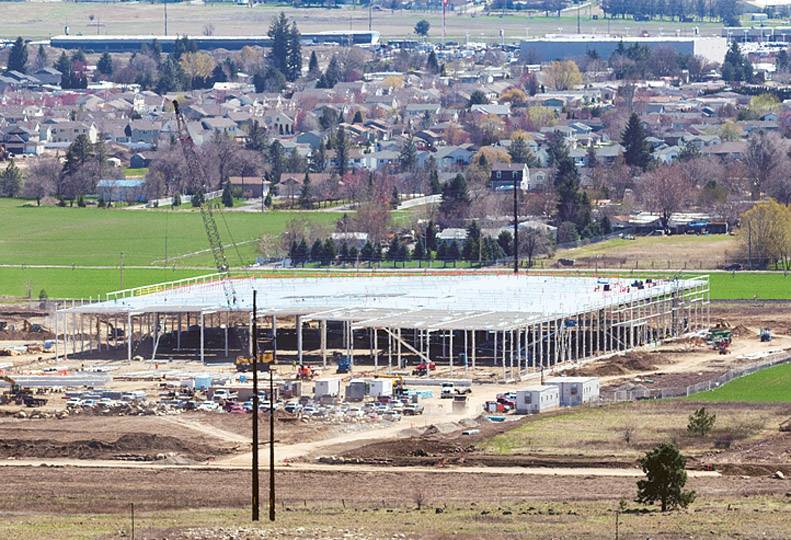 -—Katerra Inc.
The Katerra Inc. cross-laminated timber factory is currently under construction in Spokane Valley. The facility is expected to begin producing panels in early 2019.

The bill specifically directs the State Building Code Council to adopt rules for the use of cross-laminated timber for residential and commercial building construction, making it possible for the material to be used more widely in construction projects throughout the state.

Up until now, the state building code only permitted CLT to be used in construction of buildings up to six stories, consistent with the 2015 International Building Code. Because the language of the law isn’t specific, it’s not yet clear what the council will decide regarding new height restrictions on CLT and other wood buildings.

CLT is a wood panel consisting of several layers of wood glued together at 90-degree angles to form sturdy structural panels, which are typically created with spaces for windows and doors built in and can include pre-installed plumbing and electrical wiring. The wood for the panels is sourced from small-diameter trees that aren’t economical to be used for conventional lumber.

Proponents of CLT say the building material has several benefits.

“It’s beautiful, it’s durable, it’s higher quality than stick framing, and it’s less labor intensive,” says Mike Bradley, project manager and principal at Beacon Builders LLC, of Spokane. “It’s faster. Compared to concrete and steel it’s also cheaper. It’s easy to build and it is not as limited by weather as something like concrete would be.”

Bradley was involved last year in what he believes was the first CLT project in Spokane, the CrossFit Duratus building, at 711 N. Helena. He says he’s currently involved in three more CLT projects: an apartment complex in Cheney, a commercial building in Seattle; and a single-family residence in Cusick, Wash.

Graham Construction & Management Inc., which is headquartered in Calgary and has a Spokane office, has also been involved in regional CLT projects. The construction company collaborated with NAC Architecture, of Spokane, and atelierjones LLC, of Seattle, to create a four-classroom addition to Adams Elementary School in Wapato, Wash., and a four-classroom addition at Valley View Elementary School, in Toppenish, Wash., through the Washington state Department of Enterprise Services.

“The project gave the state an opportunity to test and fine-tune multiple classroom designs,” says Brian Holecek, director of operations at Graham. “It also gave the Graham team an opportunity to advance our skillset using this new building method.”

Meanwhile, in Spokane Valley, a new Katerra Inc. CLT manufacturing facility is taking shape. Todd Beyreuther, senior director of advanced building materials at the Menlo Park, Calif.-based construction, design, and manufacturing company, says the factory is expected to be completed later this year and will begin producing CLT panels around early 2019. The factory is expected to employ about 150 people.

The first CLT project Katerra plans to tackle here, Beyreuther says, is the Catalyst Building. As previously reported in the Journal, the $50 million, 150,000-square-foot building to be built along the 500 and 600 blocks of east Sprague Avenue will be occupied by Avista and Katerra, as well as three academic departments of Eastern Washington University.

“Katerra’s goal is to use CLT in most types of multifamily and commercial buildings, and we’re also now exploring using CLT in industrial buildings,” Beyreuther says, adding that Katerra has not yet committed to any industrial CLT projects. “We are primarily focused on our supply chain, our line of projects. There are a lot of projects where … we can be our own driver in terms of interest.”

Bradley says he’s heard rumors that Katerra will “sell all their CLT to themselves.”

“What I think will have a much bigger impact on the area will be when the Vaagen plant is operational,” Bradley says, referring to the in-progress CLT manufacturing facility Vaagen Bros. Lumber is constructing in Colville. “They’ve already hooked into the supply chain for raw materials for CLT.”

A representative of Vaagen Bros. Lumber could not be immediately reached for comment.

Bradley contends there are still a few obstacles for CLT to clear before it can become more widely used in construction.

“I think the limitations right now are the cost and the clear span distance,” Bradley says. “If we can get the cost to come down, it will get (CLT) to roll out in a big way. It could be a game-changing material. I think it needs to become a commodity.”

Despite the benefits of CLT, Bradley says he’s frustrated by the lack of consistency, claiming different CLT factories make products of different thicknesses and strengths rather than a universally standard product. He also sees a flaw in the process of creating a CLT building, which typically involves several people.

“I’ve got to get an engineer and a CLT manufacturer together to decide which panel we’re going to use for the building, and then I’m locked in, I can’t look at other bids,” he says.

Holecek sees this process as another benefit of using CLT panels.

“This requires close collaboration among the contractor, design team, fabricators, and installers,” Holecek says. “All parties are equally important and affect how successfully the CLT will be installed. The design and planning completed during pre-construction pays off with a greatly reduced construction schedule.”

Beyreuther says the senate bill and the construction of CLT manufacturing facilities will place Washington ahead of much of the country.

“The senate bill is based off a two-year national effort to add amendments to the existing building code, which is adopted in some form across the entire country,” he says. “The senate bill accelerates that in Washington.”

Holecek concurs that the bill is a positive step forward for CLT use in the state.

“With the development of a new construction product, I think it is normal for a building code to be adopted and it just further shows how beneficial this product is and that it is going to be around for a long time,” he says. “I think CLT is just now starting to slowly but surely gain momentum, and I believe in the future, it will become a building material that is regularly used and incorporated into many different building types.”

Beyreuther says Spokane is poised to benefit from increased adoption of CLT.

“We really believe that Spokane is at a nexus of many things that makes this the right place to do this,” Beyreuther says of constructing the CLT factory here. “I think it is worth noting that the site selection of being in Spokane or being in Washington is tied to the resources, where we can find high quality and sustainable fiber. Because it’s a heavy product, it’s important to be near where the market is.”

Bradley says production of CLT in Washington will be valuable to towns that have traditionally been involved in the lumber industry.

“Put timber towns back to work,” Bradley says. “It’ll be good for all of us.”