Once sleepy, Deer Park is home to fast-paced growth 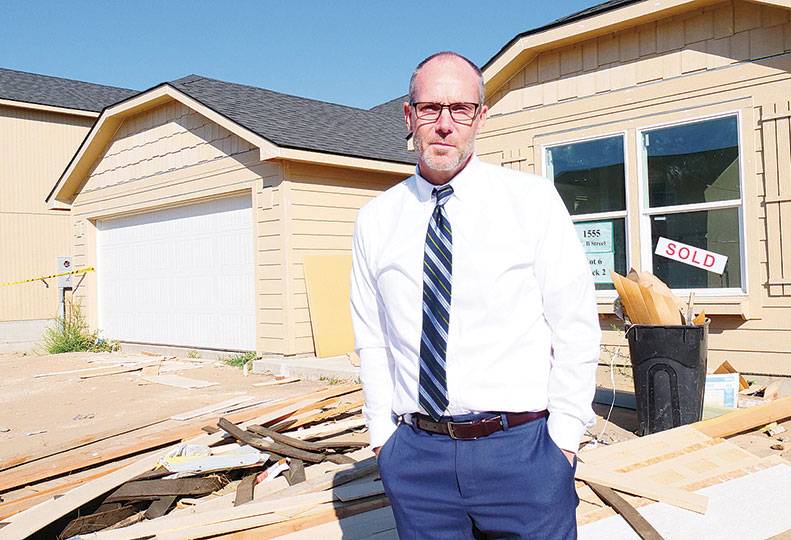 The rural town of Deer Park, roughly 22 miles north of downtown Spokane, is attracting massive growth as over 700 residential units valued at more than $200 million are planned or under construction in and near the community of 4,200 people.

Travis Hanson, Deer Park School District superintendent, has been keeping a close eye on the community’s growth as it has an impact on school enrollment. He claims that 70% of new homes sold in Deer Park in recent years were purchased by families with kids.

“The volume of new homes being built will have a significant impact on every facet of the community of Deer Park,” he says.

Five large residential developments, for example, are slated for construction. One is dubbed Shamrock Glen by Hayden Homes. According to preliminary plat details, the development calls for 210 single family homes and 105 apartment units.

Scott Krajack, land development director for RYN Built Homes, says the company began construction on the first of seven planned phases at the development site in 2019 and anticipates completing the entire development in 2025.

The total development value is estimated at $115 million, although Krajack says that could change over time.

“There are about 50 homes that are completed and lived in, and about 30 more homes that are under construction,” says Krajack. “Most of those are already sold.”

The apartments at Shamrock Glen will be built on a 7-acre lot, while the single-family homes are being built on individual lots ranging from 6,000 square feet to 16,000 square feet, says Krajack. He adds that Hayden Homes is currently completing homes in the second phase and is moving into the third phase.

Mattson says he recently sold the land to Jason Kindred, chief operating officer of Spokane-based Lakeside Capital Group LLC, which was founded by entrepreneur John Hemmingson. Kindred was not immediately available for comment.

Whipple Consulting Engineers is providing engineering services, according to the preliminary plans.

Corey Condron, president of Condron Homes, says the development will be made up of 80 single-family homes on 10-acre lots.

Condron estimates that the total value of the development will be roughly $84 million. One home has been completed, and four are under construction, he says.

Condron says asking prices for homes in Timber Valley range from $900,000 to $1.2 million. According to the company’s website, a 2,200-square-foot, three-bedroom home is listed for about $1 million.

A development named Mountain View Meadows, which preliminary plans show will have 105 single-family homes, will be located on 30 acres of land near the north and west sides of the Deer Park Golf Club. Bradley West, of Spokane-based Deer Park West LLC, purchased the land in 2021 for $4.8 million, Assessor’s records show.

West couldn’t be reached for comment, but Hanson says construction is scheduled to begin in the coming months.

A 35-acre residential development site located east of U.S. 395 and southwest of the Deer Park Sports Complex tentatively named Too Old Boys, according to site plans, calls for 40 rental units and 87 single-family lots to be developed in three phases.

Deer Park Mayor Tim Verzal says the city is trying to keep up with growth.

He notes that Deer Park issued 33 building permits 10 years ago, in 2012, and permit numbers have risen steeply since then. The city issued about 160 building permits last year and is on track to match that this year.

Hanson says he sees potential for the town’s population to more than double to nearly 10,000 residents within the next 10 years, and, as a school official, is concerned about whether the town and school district can absorb such growth.

With two elementary schools nearly at maximum capacity, the school board and the newly formed facilities committee need to plan for growth, Hanson says.

The Deer Park School District recently completed a $7.5 million renovation and expansion project for its sixth-grade middle school wing, a project that was nine years in the making, he says.

Seeing the need to upgrade some of the middle school buildings, the school board decided to create a capital projects account to set aside funds for the project. Over a seven-year period, the school district saved over $4 million for the project and received another $3.5 million from the state’s School Construction Assistance Program.

“We were able to accomplish a lot of needs, all without having to go to the taxpayers for additional money,” says Hanson. “That felt like a win.”

Moving forward however, Hanson says he is thinking of proposing a bond measure to keep pace with the growing population.

As for longtime residents of Deer Park, there are mixed feelings about the various developments happening around them, says Hanson.

He says that although Deer Park is becoming a bedroom community to Spokane, “Deer Park clings very tightly to the fact that it is Deer Park. People love the rural identity here.”

Hanson says Deer Park is becoming unaffordable for many of its residents. Some residents have shown interest in purchasing new homes but have backed away as interest rates climb, and listing prices are much higher than they were just a few years ago.

However, Hanson contends that some growth is needed for the community to succeed. He points to companies that have entered the community or expanded operations over the past two decades that have made it possible for people to live and work in Deer Park. In addition, the recent development of the Deer Park Business & Industrial Center near the Deer Park airport has also assisted in the community’s growth in business.

“There are certainly people who are dismayed at seeing the community change so significantly,” Hanson says. “At the same time, for any community that wants to thrive and move forward … there is a certain level of growth and infrastructure that is positive.”