Outside the line: Development potential along the planned City Line route

Investment most likely at bookends of downtown, along Mission Corridor 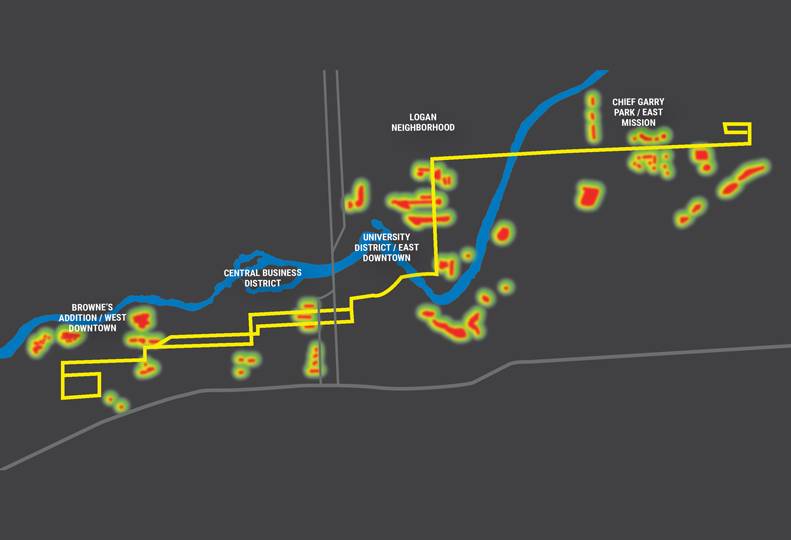 Some industry experts postulate neighborhoods bookending downtown, along with the Mission Avenue corridor, hold the strongest potential for new development along the line.

Construction of the six-mile rapid-transit bus line is set to begin in May, connecting the Browne’s Addition neighborhood to the Spokane Community College campus in East Spokane, via downtown Spokane and the University District, and is scheduled to start operating in 2022.

Gordon Hester, president of Spokane-based commercial real estate company Kiemle Hagood, says research shows that when a rapid transit bus route is installed, development picks up in the areas around the new route because of increased foot traffic, higher accessibility, and the ability to repurpose existing parking lots that might not be as necessary.

Karl Otterstrom, director of planning and development for the Spokane Transit Authority, says the planned line is expected to carry 1 million passengers a year, which is on par with the STAs current busiest route, the recently opened Five Mile Park-and-Ride to Moran Prairie route, a roughly 11.5-mile trip.

Regarding the City Line, he says, “This will be six miles long and have roughly the same amount of ridership, so that density of riders speaks to the frequency of service provided and the intensity of land use.”

Kevin Edwards, of Spokane-based commercial real estate company Hawkins & Edwards Inc., pointed to east downtown along the City Line route as an area also likely to be ripe for development as well.

Beyond that, Otterstrom pointed to the Mission Avenue corridor and the University District as the most likely to see an increase in development, though he notes that universities within the district face a few challenges.

“They’re constrained from the amount of real estate they have or what can actually fit in those spaces,” he says. “So, the degree to which transit reduces their parking requirements for that development, that allows them to fully develop their campuses to their visions and the needs.”

For example, Gonzaga University and the University of Washington’s joint vision for a new medical school on the southwest corner of Hamilton Street and Spokane Falls Boulevard includes plans to demolish an existing structure and use a portion of the parking lot for the new structure. That $60 million Regional Health Partnership building is scheduled to be   completed by August 2022, roughly around the time City Line is scheduled to gear up. Staff and students who use that building could benefit from having a rapid transit stop practically on its doorstep, Otterstrom says.

A Strategic Overlay Plan compiled by the city of Spokane and STA in 2016 laid out a number of potential strategies, policies, and actions to encourage development along the corridor, particularly in the University District, Browne’s Addition, and the Chief Garry Park neighborhood around Mission Avenue and Napa Street, which the plan identified as having the “greatest opportunities for positive change” in the corridor.

An economics and land-use impact study by Portland-based economic consulting firm EcoNorthwest in 2014 estimates the City Line could increase land and economic development value by $175 million over 20 years. Otterstrom says the numbers have not been updated to reflect 2020 values. Land value within a half a mile of the line is estimated to increase by $45 million alone during the same time frame, according to the study.

“The residential market depends on where people work, where the demand for occupancy is,” he says. “It’s a bigger formula than just putting in the Central City Line.”

Hester adds that resident parking in the downtown area is one of the biggest challenges facing residential developers.

The project originally was named the Central City Line, and is listed on public documents as such, but will be called the City Line, says Otterstrom.

The City Line project is being financed through a mix of federal, state, and local funds, which will cover the construction of 26 stops, street improvements along the route, and the procurement of 10, 60-foot battery electric buses, says Otterstrom.

Cameron-Reilly LLC, of Spokane Valley, is the apparent low bidder for a portion of the construction work, consisting of the new transit, estimated at $12.5 million.

Otterstrom says the Mission Avenue corridor has potential for residential and mixed-use developments.

Regardless of any potential development, Hester, Otterstrom, and Edwards agree that existing residences and businesses along the line will benefit from the increased traffic.

The study by EcoNorthwest, which has an office in Seattle, in 2014 shortlisted the University District and the East Mission subareas as having the most potential for new development based on the large share of developable land available within those areas, while downtown and Browne’s Addition would be more likely to see redevelopment of existing sites or parking lots.

Hester contends any development in the areas around the line likely won’t start until about six months after the line is operational.

“Once you get six months under your belt, you can see what the traffic pattern looks like, and you can get a feel for what’s the impact of the stop in front of my real estate and what type of development might make sense to help take advantage of that,” he says.

Once development kicks up, however, he contends it’ll likely start in the areas that are already seeing development, such as the west end of downtown, where Jordan Tampien, of 4 Degrees Real Estate, recently built a seven-story mixed-use building at 1309 W. First, and, with partners, redeveloped the former Watts Automotive building, just across the street at 1312 W. First, into a restaurant that opened earlier this month and brewery that opened in January.

Buildings on Riverside Avenue in Browne’s Addition also have undergone redevelopment in recent years at the hands of Spokane-based development company Selkirk Development LLC, which currently is working on a mixed-use facility at 1614 W. Riverside.

Ekins adds, “As always, smart public investment will have private investment follow, and we look forward to the developments in Spokane.”