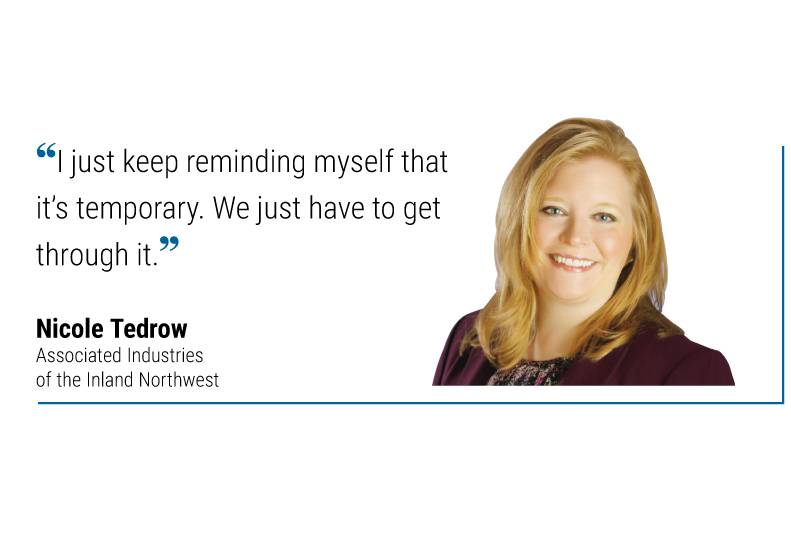 A dearth of child care options and a high ratio of women in industries affected most by pandemic-related restrictions are contributing to a disproportionate share of women leaving the workforce, some employment observers here say.

Kim Choat, director of the Women’s Opportunity Center at YWCA Spokane, says that many of the women the center works with have stopped searching for jobs in order to care for their children.

“This time we’re in highlights how much of the primary care of our children and our households disproportionately falls on the female in the household,” Choat says. “That’s why there’s a recession. There’s just too much happening in their lives to be able to go back to work.”

Grant Forsyth, chief economist with Avista Corp., says that more women would be able to return to the workforce if schools could hold in-person classes.

“Until we have a vaccine that’s been taken by a large enough share of the population, it’s going to be difficult to get back to the rhythm of a school system that looks more normal and takes some pressure off households, in terms of the child care issue,” Forsyth says.

In January and February, the rate of unemployment for women was one and two percentage points lower than for men, respectively, national data show.

Doug Tweedy, regional economist at the Washington state Employment Security Department, says the state doesn’t track county-level data regarding unemployment rates by gender. However, state-level figures will be published by the department next week.

Choat says many of the women the Women’s Opportunity Center works with have lost jobs in the service and retail industries.

According to compensation software and data company PayScale, women comprise a large percentage of occupations in sectors such as community and social services, education, library and training, office and administrative support, and personal care and services. Those occupations are more likely to experience suspensions, layoffs, or reduced hours, PayScale asserts.

According to The Local Employment Dynamics, a partnership between states and the U.S. Census Bureau, in 2018, men held 51.7% of jobs in Spokane County, while women held 48.3% of the total jobs in the county. Female-dominated industries included health care and social assistance, with women comprising 77% of that sector’s workforce; educational services, at 68.9%; and finance and insurance, at 62.9%

However, Forsyth says it’s difficult to determine which industries in the Spokane region have suffered most from a lack of women returning to the workforce.

“I’m not sure we have enough data at this point to say specifically which industries women have left or they won’t go back to,” Forsyth says.

Laura Bacon, director of membership for the Inland Northwest chapter of the National Association of Women Business Owners, says chapter members here report struggling to juggle the responsibilities of child care and entrepreneurship.

“Unfortunately, what ends up happening is women leave their jobs or close their businesses,” says Bacon, who also owns Spokane marketing company The Branding Boutique. “They’re putting family first, so everything else takes a backseat.”

Tedrow says she’s fortunate to have a job that allows her to work from home. Her two children are in fourth and ninth grades and are attending classes online.

“We’ve had to have a pretty regimented lifestyle, and there’s no room for error in our lifestyle. Everybody has to be doing what they’re supposed to be doing at all times,” Tedrow says. “I just keep reminding myself that it’s temporary. We just have to get through it.”

Choat says single mothers are struggling more than women who have a cohabitating partner to help with child care.

According to the Washington state Office of Financial Management, 30% of families with children under age 18 were headed by single parents in 2018.

“A certain amount of K-12 is really a process of taking care of your children during the day when you’re at work,” Forsyth says. “Higher-income people have been able to adapt more readily to school closures, whereas low-income people have not.”

Parents who might have relied on family members for child care typically are unable to do so now, Forsyth says.

“Suddenly, you have to ask the question: If I’m going to rely on my older parents or maybe my grandparents to help look after my kids, am I also putting them at risk for COVID?” he says.

Bacon says that many women in NAWBO supplement the income they receive from their own business with jobs at restaurants and retail establishments. With the recent implementation of restrictions to restaurant and retail occupancy in Washington state, Bacon says she expects many of those women will lose their supplementary income again.

Mark Mattke, CEO of the nonprofit Spokane Area Workforce Development Council, says employers and government entities are aware of the toll the lack of available child care is taking on women workers in particular.

“We’re working very hard as a community to develop some new child care solutions, to figure out what the needs are in the community and where the gaps are,” Mattke says.

The council is working in partnership with organizations such as Community Minded Enterprises, The Next Generation Zone, and the Spokane Workforce Council to create flexible, affordable child care options for working parents, he says.

The partnership received a $100,000 grant in September from the Washington state Department of Commerce to analyze child care options.

Mattke says the partnership expects to have data from the analysis available in the first half of 2021.

Tedrow says that Associated Industries heard from several employers earlier in the year who were interested in creating on-site day care centers for children of employees.

“I don’t know whether any of them did,” Tedrow says. “For the few that we talked with, it’s so regulated and there’s so many legal hurdles that they have to jump through that ultimately, it just wasn’t going to be a good fit.”

Helping to provide child care can also be costly for employers, Forsyth says.

Instead, says Tedrow, employers are working to offer more flexibility, such as options for different shifts, working from home when possible, and leaves of absence.

“I’m seeing employers that are willing to modify hours and shifts, and do all kinds of things, which is helpful for those employees who can’t telework,” Tedrow says. “They really want to hang onto their workers, and they don’t want to lose them.”