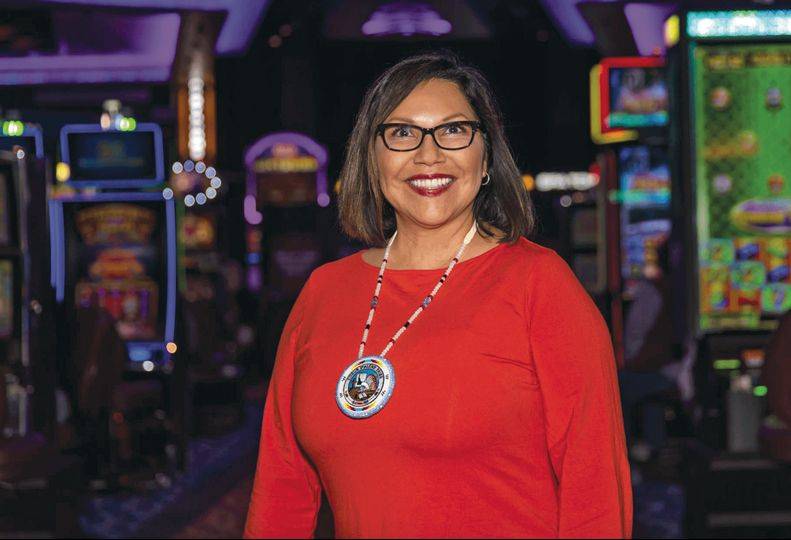 Laura Stensgar was named CEO of the Coeur d’Alene Tribe-owned Coeur d’Alene Casino Resort Hotel last month. The tribe has about 2,500 members, about 150 of whom work at the casino. Before she moved into the C-suite, Stensgar was the casino’s marketing director from the time it opened in March 1993. The Journal recently asked Stensgar about the casino’s role in the community, the role of cultural tourism, and her plans for the casino.

Journal: How has the casino changed over the past 26 years?

Stensgar: (Before) day one, we had no idea what gaming was and what it was about. We started out with bingo, and then three years into operation we introduced the video gaming machines, and then it just boomed after that.

Now we have a full-fledged resort, and we have close to 1,000 employees. It’s been amazing to watch and be part of as things have come to fruition.

This establishment represents hope and opportunity. We initially started it to provide jobs for tribal members and revenue for social service programs within the tribe. We’ve gone over and beyond those efforts.

Journal: What role do you see the casino playing in the greater Coeur d’Alene community?

Stensgar: We’re definitely good neighbors. It’s part of our value system as Coeur d’Alene people that we give back, and that’s indicative in our agreement with the State of Idaho.

In 1991, we sat down with the State of Idaho and negotiated a gaming compact. Our tribal leaders spoke up and said that we want to put 5% of our gaming revenues toward education. At the time, some of the state leaders were surprised. They said, “You want to put this in this gaming compact?” I was so proud of our tribe.

We have always followed through with that commitment. To date, we’ve given over $32 million toward education. We help other charitable organizations, we have a donations committee, and we have a team of employees who go out and donate their time toward charities.

Journal: This year the casino resort hotel was named Tribal Destination of the Year by the American Indian Alaska Native Tourism Association. Why do you think the Coeur d’Alene Casino Resort Hotel was chosen for that?

Stensgar: We’re very excited about that recent accolade. We have a beautiful resort with a lot of amenities, and I think that’s part of the appeal.

We also have our cultural tourism program, and that’s just an enhancement of who we are and what we’re about as an establishment. We have a lot to offer, along with our surrounding natural beauty. And then our great customer service -- we call it traditional tribal hospitality.

Journal: Can you tell us more about traditional tribal hospitality?

Stensgar: Traditional tribal hospitality is something that we’ve embraced since day one in that as tribal people, when you come into our homes, we want you to feel comfortable. We want you to not be hungry. We’ll provide food, we’ll provide a warm chair or bed to make you feel at home. That’s what we try to provide within our establishment.

When you walk in our doors, you feel welcome, and you feel comfortable in bringing your friends and family.

Journal: What role does cultural tourism -- the program you started three years ago -- play in the casino resort hotel?

Stensgar: I recognized that a lot of people associated tribes with casinos. And I don’t blame them. On TV, we’re promoting the big giveaways and the great prizes that we have to offer, so of course you associate the casino with the tribe. But we’re so much more than that.

There’s a whole tribe, it’s not just the casino. That’s part of why we started the program: to share who we are as Coeur d’Alene tribal people, our history, where we’re going, who we are. We’re not just in the history books, and we have our own history to tell.

We have a buffalo tour, where you go to an actual bison ranch and see the buffalo, we speak to the history of the tribe, and the history and importance of the buffalo. We have our Steptoe Battle tour, which talks about the last battle of the Coeur d’Alene tribe. We have a canoe and kayak tour that’s on the southeast end of Lake Coeur d’Alene. We have authentic tribal dinners where we have exhibition dancing, we tell stories, and we share some of our traditional foods.

The program enhances our brand -- we’re Coeur d’Alene tribal people and we have something beautiful to share. It’s a beautiful program that we expect to do bigger and greater things with.

Stensgar: The biggest challenge is our location. We are located in a rural area. However, a lot of people don’t realize that we’re only 25 minutes from Spokane and Coeur d’Alene. Once they come out here, they realize, “Oh wow, that’s not as far as I thought it was.”

Journal: As the newly-named CEO, what are some of your plans for the casino resort hotel?

Stensgar: Internally, I want a clear vision for everyone, for us to sit down and establish what that clear vision is as a business and how to be profitable in that effort and to work together toward that effort. Secondly, I think it’s important to build and nurture relationships with employees, to empower them and to listen to them. And also, finally, to continue to provide and contribute toward the community and to be a good neighbor.