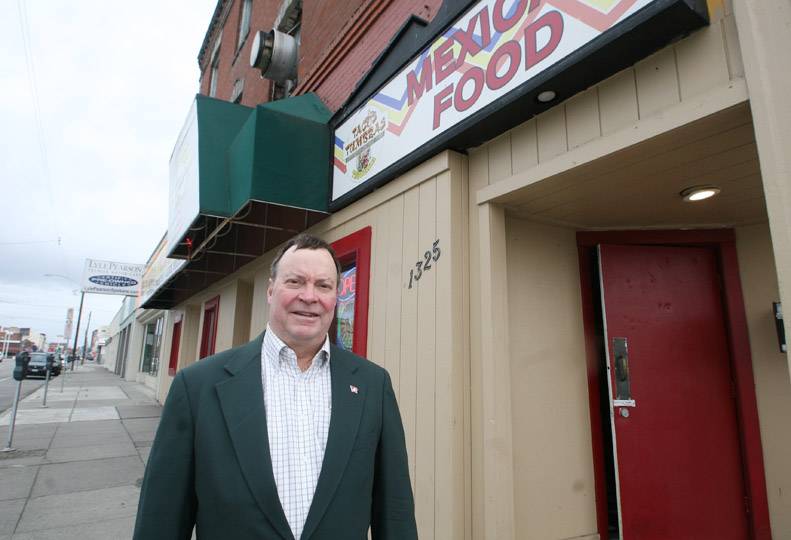 A group of businesspeople in southwest downtown Spokane plans to move forward with a proposal to join the city’s Business Improvement District, citing a need for graffiti cleanup, safety patrols, and beautification.

The only caveat is a majority of property owners and tenants there have to agree through a petition that they’re willing to pay assessment fees. If so—and with city council approval—the section south of the railroad viaduct to Interstate 90 between Lincoln and Ash streets could become the first expansion to the district since its formation in 1995, says Downtown Spokane Partnership Vice President Marla Nunberg.

Tom Wilson, who owns commercial buildings along Second and Third avenues, says advocates of a plan to join the district expect this spring to seek petition signatures from businesses and property owners, with a goal to gain services this summer. He is chairman of a steering committee promoting the plan.

“I think a vast majority of business people are in favor of moving forward with annexation of what’s going to be called zone 7 of the Business Improvement District,” Wilson says. “A lot of us on the steering committee expect that getting the commitment from businesses to move forward will get done in the next few weeks.”

Under contract with the city, the Downtown Spokane Partnership administers the district’s services with a $1 million annual budget. It currently provides cleanup that includes removing curbside trash and graffiti, safety patrols, and marketing services to some 80 blocks of the downtown core, using funds collected from about 850 businesses and 350 property owners who pay yearly assessments.

Wilson says the southwest area’s estimated assessment cost for cleanup and safety services from the district is $120,000 a year. Property owners and business tenants would share that cost under a formula that considers assessed property value and square footage, which he says equates to about $70 per $100,000 of assessed property value per year. He says a retail tenant would pay about $100 a year per 1,000 square feet of space occupied.

At a meeting last week, the steering committee and DSP presented cost and service information to about 20 property owners and businesspeople, and some in the audience were hearing details for the first time, he says, adding that most of the feedback to date has been positive.

“The vast majority who have participated on a steering committee and who have contacted us, or we’ve contacted them, have been in favor,” Wilson says. “The only question is cost.”

He says many small-business owners have talked to him about a noticeable increase in graffiti and vandalism in the past year, adding, “I started work on this in 2008. Basically, it was shelved at that time because we couldn’t come up with a financial structure that could support the BID services.”

Talks of joining the Business Improvement District started up again in January 2013, because issues and problems in the neighborhood continue to worsen, Wilson says.

“I think it’s become clearer that the effects of the district’s clean team and graffiti removal services are something they can put their finger on,” he says. “The biggest things are the extra security patrols.”

Nunberg says the southwest-area property owners and businesspeople approached DSP about the proposal. Additionally, she says the DSP is working with the city on beautification projects along routes into downtown from I-90 that include the southwest area.

“We feel it’s an important area to downtown, and there’s also the importance of that area being a gateway into the city,” Nunberg says. “It is a priority for 2014.”

She says the district’s minimum payment for a business in the area would typically be about $90 a year, but could go as high as $10,000 a year, depending on the formula that considers assessed property value and square footage.

The southwest downtown area would add roughly 25 blocks to the current district, which is generally bordered by Maple Street to the west, Browne Street to the east, the railroad viaduct to the south, and North River Drive to the north. The city reauthorized the district in 2001 at the request of the area’s business and property owners, but the boundaries haven’t changed significantly, Nunberg says.

She says the city contributes $100,000 a year to the Business Improvement District, over the amount from assessments received. She adds that the DSP pays the city $30,000 to do the district’s billing, and is covering the cost of leasing for a downtown police precinct, “so it’s a partnership.”

Nunberg says that in reviewing ways to support the southwest area, a priority at first would be cleanup and safety.

“What we looked at for that area is we would need $120,000 to pay for two part-time clean team members and two full-time security ambassadors,” Nunberg says. “They would be ones we would need to hire in order to cover that many blocks.”

Scott Thompson, co-owner of Thompson Gas & Deli, 1005 W. Third, says the business is part of a family-ownership concern that owns 1 1/2 blocks in the southwest downtown area. After attending last week’s meeting, he says he learned the family business’s assessment under the district would be under $200 a month.

“I think it’s pretty affordable for what they want to do for the neighborhood; it appears to be cost-effective,” Thompson says. “I think we need to do something as business owners in this area to beautify, to eliminate some of the graffiti in this part of town. They work very well with the police department taking care of transients.”

Wilson and his wife, Barbara, own and lease out a majority of the commercial spaces on the block east of Cedar between Second and Third avenues. One major tenant is the Lyle Pearson Auto Group, of Boise, which operates the downtown Jaguar, Land Rover, and Volvo dealership, at 1310 W. Third. Other tenants include the nonprofit Tincan, at 1317 W. Second, and the Tacos Tumbras restaurant at 1325 W. Second.

When the Business Improvement District formed, businesses there collected about 73 percent approval in a petition to create the entity, Wilson says.

Legally, creation of a new improvement district or the expansion of an existing one can occur by a vote of  the city council only after a petition is signed and submitted by property and business owners representing 60 percent of the assessable value in the identified area.

He adds, “There’s a pretty good push right now to try to get something done by this summer—I think particularly among the small-business people I’ve talked to the past several months. The small businesses have really been impacted by miscreants on the streets.”

He contends efforts to spruce up the area will help boost what he calls downtown’s auto dealership row.

Wild Sage American Bistro co-owner David Wells says his business partner, Tom Sciortino, is reviewing the impacts of joining the district, but both of them generally are supportive.

“It’s about us wanting to be part of the downtown core and the policing of our area,” Wells says. “We’ve certainly seen a change in the improvements downtown since we’ve been here. We feel we’re about a block off the core of attention. We just feel it should be extended a little bit.”

Bob Jones, owner of two downtown properties at 1302 W. Second and 1318 W. Second, wasn’t able to attend the recent neighborhood meeting but says he’s in favor as long as costs aren’t too high. He says graffiti problems in the area have risen recently.

“I’d say at least once or twice a month, I have to go out and cover the graffiti, so that’s been a real problem,” Jones says. “I know with this district that might cut some of that back, because someone would be probably patrolling that.”