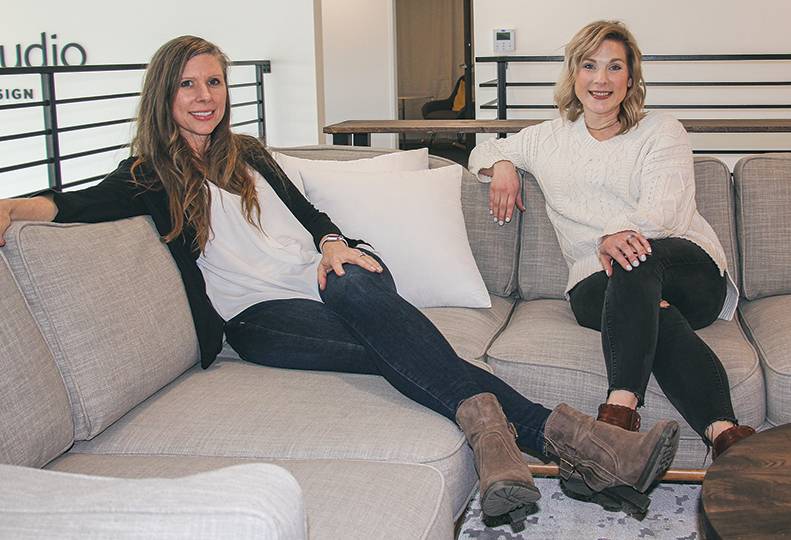 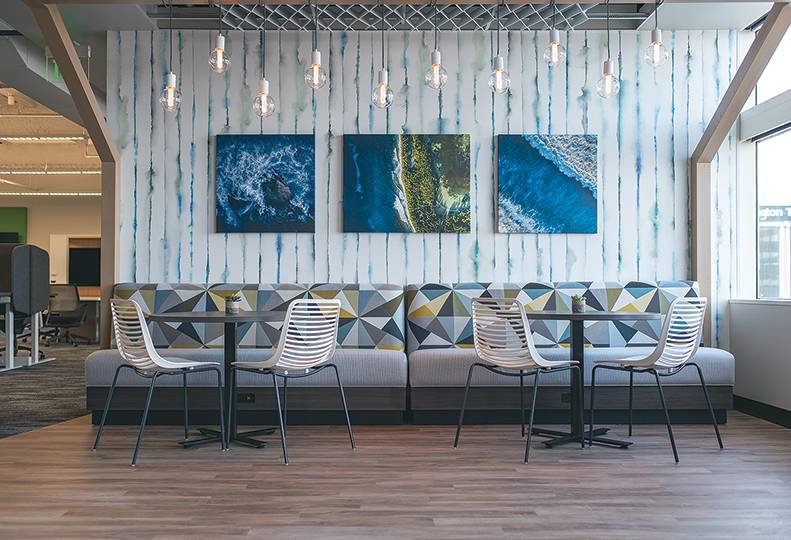 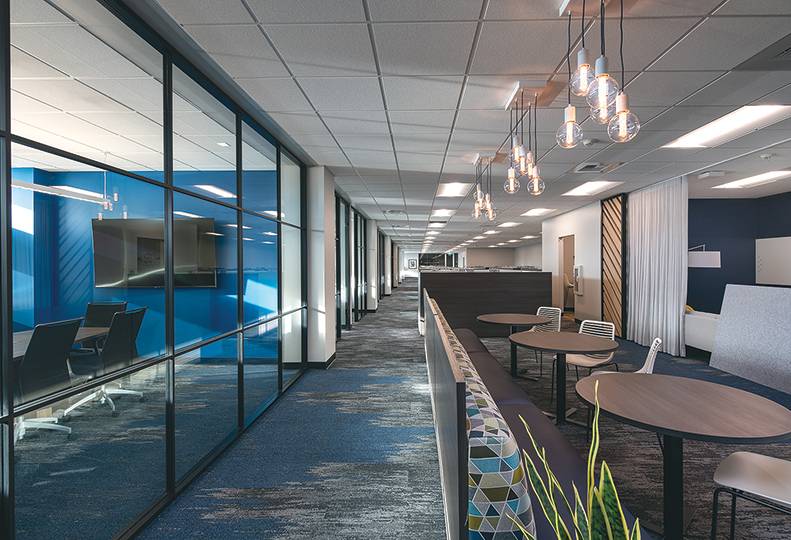 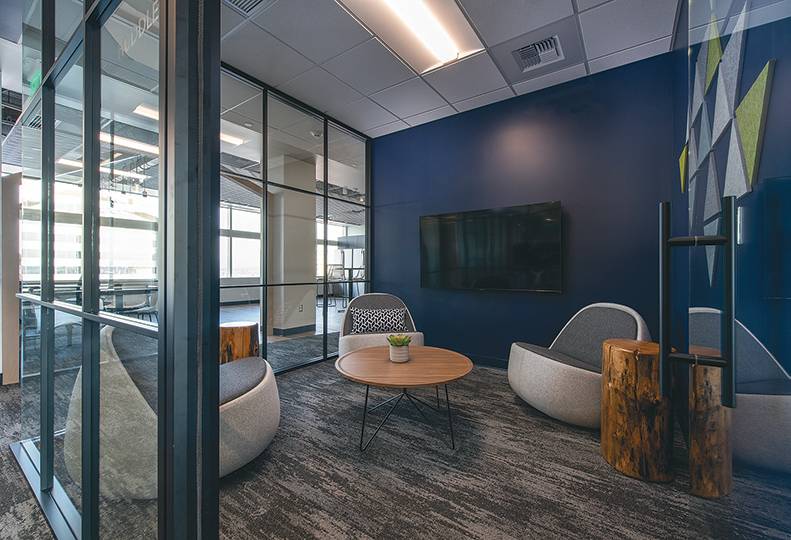 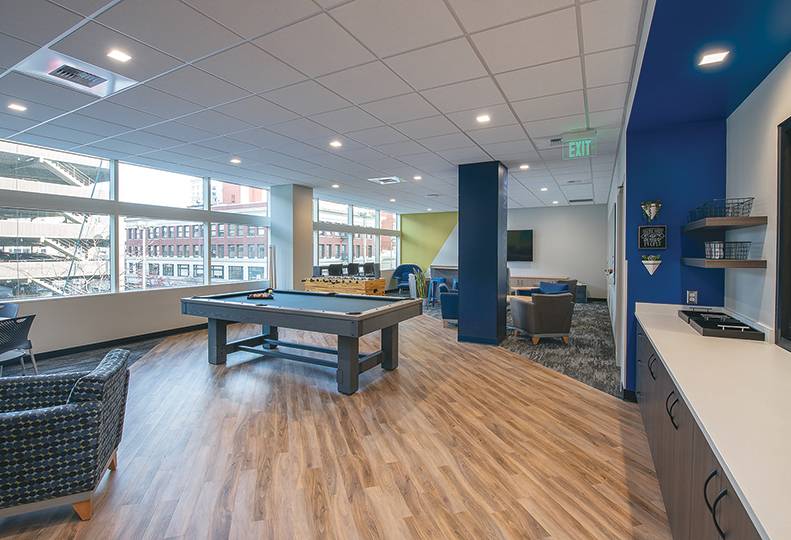 A commercial design concept that incorporates residential elements is emerging as a trend in workspaces as employers try to entice new and existing employees into the office, experts here say.

Resimercial design aspects were beginning to crop up in commercial spaces about five years ago, says Courtney Dohnal, a Spokane-based interior designer and senior workspace consultant at Seattle-based office furniture dealer OpenSquare. Now, resimercial is in high demand for a variety of commercial workspaces, she says.

“We were starting to realize that people wanted friendlier, kinder, more welcoming places to work,” Dohnal says. “We started seeing living room environments and lounge spaces in the work environment to the point where we now plan for living rooms when we’re talking to clients about their future space.”

Resimercial design elements include comfortable seating, a variety of lighting options, flexible spaces, and accessories such as throw pillows, houseplants, and ottomans.

Angie Cashen, principal and project manager at Spokane-based design company DS Studio, says resimercial elements were important to the firm when it was designing its own office space. DS Studio, formerly Design Source Inc., moved into a renovated 1,500-square-foot space in a building it bought at 502 E. Fifth last fall.

Cashen says DS Studio created “zones” within larger open spaces through strategic furniture placement. A portion of the main floor is dedicated to desks and meeting spaces, while an open concept upstairs features a kitchen and living room that emulate a residential apartment.

Early in the resimercial movement, Dohnal says, many designers took inspiration from hospitality settings, such as hotel lobbies and coffee shops.

The concept of a “third space” within the office was catching on, Cashen says.

“There’s the office, there’s home, and then there’s the third space: the library, the cafe, the park,” Cashen says. “Companies started thinking, what if that third space was in your office?”

Then, the COVID-19 pandemic hit.

Dohnal says she stopped working at OpenSquare’s downtown Spokane showroom and joined the millions of U.S. workers who transitioned to working from home, where they remained for much of the past two years.

“So many people went home, and we got comfortable at home,” she says. “We come back, and we’re missing some of those comforts of home. We’re missing the option to get up and work at the kitchen island. I don’t know if other people do that, but it’s something I do quite a bit.”

Many companies that had considered incorporating resimercial design stopped planning when the pandemic hit, Dohnal says. Some employers questioned whether office spaces would survive the pandemic.

“Companies stopped and didn’t know what to do,” Lange says. “They thought, is the modern office gone? At the beginning, it was like, are we ever coming back to the office?”

However, employees are returning to the office, and Dohnal says they’re even more attracted to comfortable, homelike workspaces than they were before the pandemic.

“I think it’s a permanent shift,” she says. “It’s taken resimercial from what could have potentially been a trend, and it’s really changed the way that we look at the workspace and the way we’re going to treat the workspace, moving forward.”

Dohnal says commercial furniture manufacturers have been responding to the demand for resimercial design.

“We’re seeing residential companies like West Elm partnering with our commercial partners,” Dohnal says. “Our commercial partner is Steelcase, and they’ve created West Elm Work as a result of that partnership. They’re creating commercial-grade products that look and feel just like their residential products, but they conform to the corporate expectations of those higher-demand spaces and uses.”

Lange says it’s important for employers to understand that commercial grade furniture is likely a better choice than furnishings created for residential use.

“Commercial grade basically means that it passes a certain level of testing requirements,” Lange says, which include regulations regarding weight limits and non-flammable materials.

“If employers have a nice space, then they feel that they can attract more talent,” Guenzel says. “They’re trying to promote wellness by letting people choose where they want to work and how they want to work.”

Traditional workplace elements such as cubicles, overhead fluorescent lighting, and rigid furniture are falling out of favor, Cashen says.

“Cubicles in offices, that’s not going to make anyone want to leave their home office,” Cashen says.

The design trend is meant to set people at ease. In the workplace, this can lead to better communication and collaboration, Dohnal says.

“It’s not just about it feeling better and attracting better people, we’re also learning that psychologically, it’s building trust,” she says. “When we remove the boardroom table out of a meeting room and add sofas and lounge chairs and ottomans, we remove the barriers that prevent people from building connection.”

“A commercial sectional is $2,500,” she says. “You can find ways to make the budget work, but no matter what, you’ll spend a little more.”

But she also claims that customers who have embraced resimercial design have observed an increase in productivity.

“When employees are in these great resimercial spaces, they’re not thinking about laundry and their dogs aren’t bothering them, so they’re able to work better,” Cashen says. “Well-designed spaces equal happy employees, which always equals productivity, retention, and loyalty.”