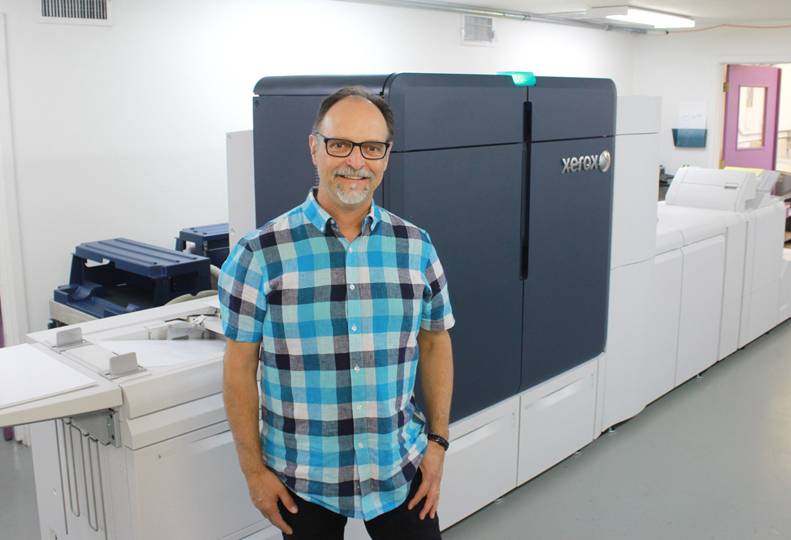 Spokane’s Pressworks Inc. and Cowles Publishing Co. are investing in new equipment to enable them to continue serving customers in the changing business climate.

“The real feature is this iridescent quality you can create with blended color and metallic underlays. It is a capability unique to this equipment,” Hansen says.

The image quality and detail of the final product was higher than what he had seen in the past, and that quality is more attractive to the eye, he contends.

“We feel that this new press just surpasses any level of quality with what I have so far,” he says. “Its ability to put down very exact color and perfect registration is impressive. It expanded our possibilities in what I could offer to my customers in a way I thought was substantial.”

Hansen declines to disclose the price of the press but says the investment was about the same cost of an average house in Spokane.

It can accommodate coated, uncoated, textured and dark papers, labels, business cards, window decals, greeting cards, polyesters, among other materials, Xerox’s website says. It can print on demand on a variety of paper types. The largest sheet it can handle is a banner size of about 13 inches by 47 inches.

“Imagine the possibilities of how your piece could be unique or more high value. It can be enhanced in a way that catches the viewer’s attention. It’s just a higher-value piece because it has a higher impact,” Hansen says. “It adds another dimension of quality and design. The color is much more vibrant and dynamic.”

The special features like metallic inks and iridescent qualities do add to the cost of printing, but it depends upon how much the project requires, he says.

While Hansen declines to disclose Pressworks’ revenue, he says orders have remained consistent in recent years. Even with the growth of digital options, Hansen believes there is room for high-quality printed pieces.

“I still think we have something to offer the community … a place for artists to come and think of creating high-end printed products that are difficult to still do online,” says Hansen, who has been in the printing business since 1980. “We’re about having a relationship with a designer or customer.”

In addition to the new press, Pressworks has a four-color digital press and lithographic equipment. It also does die cutting, foiling, letter press, and binding.

Meanwhile, Cowles Publishing plans to move its press operations to a new building in Spokane Valley from its downtown facility, at 1 N. Monroe, and rebrand those operations as Northwest Offset Printing.

Cowles Publishing is an affiliate of Cowles Co., which owns the Spokesman-Review and the Journal of Business.

The press operation will be relocated to 19223 E. Euclid, east of Barker Road and south of Trent Avenue, says Rick Sant, general manager of Northwest Offset Printing. The property is owned by Centennial Real Estate Investment, also a subsidiary of Cowles Co.

The building will have about 60,000 square feet of floor space with 35-foot-high ceilings.

The facility will have room to add another press line in the future. In addition to the printing operations, the building will include office space, newsprint storage, and bindery and inserting equipment, Sant says.

The move is slated to occur in late 2019 or early 2020, and about 70 employees are expected to relocate, he says. Once the press operation has moved, the company plans to market the downtown property.

As print newspaper readership has declined across the country, publishers have had to decide whether to continue printing in-house or outsource. As no press locally has the capacity to print the Spokesman-Review, Cowles Publishing decided to make the move, Sant says.

“Newspapers have to make a decision of what they’re going to do. They either have to get into commercial printing or get out of it altogether and outsource,” says Sant. “There’s a real opportunity here. (Cowles Publishing) should really be dominating here.”

Cowles Publishing plans to add a new press, called a Goss Magnum, which has the flexibility to print many different sizes and shapes of products, allowing the company to offer offset printing more broadly, Sant says. In contrast, the existing newspaper press can only handle one size.

The company plans to target publishers with small to medium distribution, such as magazines or newspapers.

“We’re not going to print the Seattle Times on this press, but we could print just about any other newspaper in Washington or Idaho. On the other hand, we’re not going to be printing the National Geographics or Sears inserts nationwide.”

The new service won’t make the company a competitor of existing commercial printers here, Sant asserts. “They have different kinds of equipment. They have a different niche they go after.”

Minimum quantities likely would start at 5,000, he says.