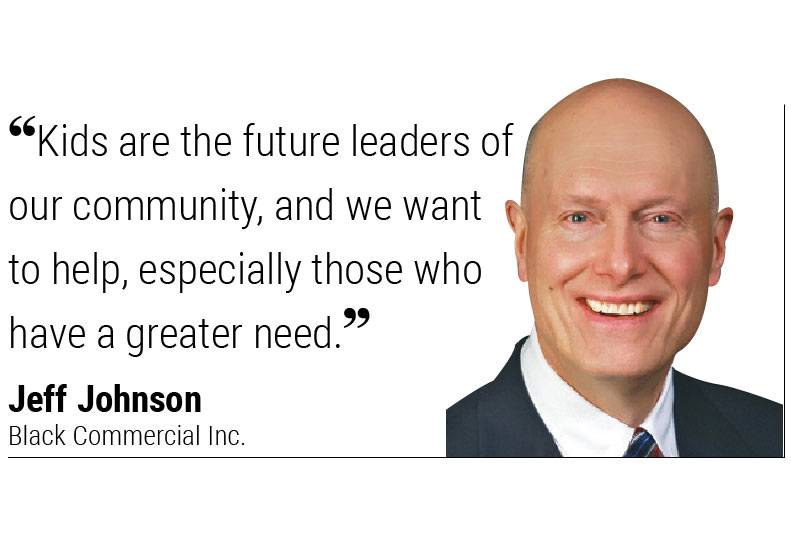 When students at Longfellow Elementary School returned to in-person schooling in fall 2020, they received a surprise greeting from a dinosaur, a penguin, a flamingo, and several other larger-than-life characters, who welcomed the children into the building with cheers and applause.

The people inside those brightly colored inflatable costumes were employees from Spokane-based commercial and residential real estate management company Douglass Properties, which “adopted” Longfellow as part of a program that provides weekend meals and other support services to kids in schools throughout the Spokane area. That program, Bite2Go, which started in 2013, has grown to include roughly 160 businesses, nonprofits, and churches that have adopted 122 schools in Spokane and Stevens counties and supplies weekend meal kits to more than 6,200 students.

“It’s meant a lot to us to get out into the community and be part of this effort to help fill these needs in the schools,” says Deanna Malcom, commercial property manager at Douglass Properties. “You develop close connections to the people and the school, and you become an important resource to them.”

The Bite2Go program is run jointly by Spokane-based nonprofits At the Core and Second Harvest Inland Northwest. Kits cost $5 each and go to students identified by teachers and counselors as going hungry on the weekends, says Tom Stevenson, president of Bite2Go.

Sponsorships cost $180 annually per child for elementary-aged children, $200 for middle schoolers, and $240 for high schoolers. In addition to funding the kits, sponsors commit to picking up the meals from Second Harvest and delivering them to the school each week. For many adoptive organizations, the weekend meal kits prove just a starting point for their involvement with the schools, he says.

Douglass Properties, which has 90 employees, became involved with the Bite2Go program in 2019 when it adopted Shadle Park High School, Malcom says. The company sponsors 60 students at Shadle Park. In addition to providing meal kits, employees of the company have participated in schoolwide lunches and spoken in leadership classes. They also purchased gifts for the teachers last Christmas. During the pandemic shutdown, they hand-delivered meal kits to students at their homes.

In addition to the “Animal Crackers” welcome back-to-school event, the company provided food for Longfellow’s teacher appreciation week last spring. It also bought books at Christmas for every kindergartner, as well as gifts for eight families identified by counselors as being in need during the holidays. When school representatives asked Malcom if the company could help provide “soothing boxes” for each classroom, employees bought fidget toys and other supplies and assembled each box themselves.

“What we hear from the schools is that it’s so helpful to have an outside resource and an established partnership they can turn to when needs come up,” Malcom says. “We have the flexibility and the resources to be able to respond to those needs quickly.”

Malcom was first introduced to the Bite2Go program by Jeff Johnson, president of Spokane-based commercial real estate brokerage Black Commercial Inc., which has sponsored Bemiss Elementary School since 2015. Johnson, who joined the At the Core board in 2016, says he was among many people in the community who have been surprised to learn how many children here are suffering from food insecurity. Currently, one in five children in Spokane are considered food insecure, according to hunger-relief organization Feeding America.

“Kids are the future leaders of our community, and we want to help, especially those who have a greater need,” Johnson says.

The majority of students at Bemiss qualify for government-subsidized lunches, he says. Black Commercial sponsors 85 to 100 of those students, or roughly 25% of the total student body. The company, which has 110 employees, provides the sponsorships through a combination of a payroll deduction plan, in which employees’ voluntary contributions are matched by the company, as well as additional donations from staff and brokers. Employees sign up to pick up and deliver the kits to the school each week, and those sign-up sheets always fill up quickly, he says. Employees also have participated in “VIP Builds” at Second Harvest, where they help assemble meal kits. Last Christmas season, they got together during a lunch break and assembled 100 treat bags to deliver to the kids for the holidays.

Black Commercial also has participated in career days at the school and has helped with clothing and school supply drives, Johnson says. Before the pandemic, employees were able to deliver the meal kits directly to teachers in the classrooms, rather than dropping them off at the front office. Johnson says they enjoyed those personal connections with the staff and students, and they look forward to when they can resume in-person classroom deliveries.

“I think the most important thing is it keeps us in touch with those in our community who are in need and gives us a better understanding of those needs,” Johnson says.

The opportunity to get more deeply and directly involved in the needs of their neighbors is what led Liberty Lake-based financial consultant group Randall & Hurley Inc. to adopt East Farm Elementary in 2016, says Christina Hull, a plan consultant at the company. Randall & Hurley had recently moved to Liberty Lake from downtown Spokane, and its leaders were looking for a way to get involved in the area. The company, which has 53 total employees, including 29 working at its Liberty Lake headquarters, sponsors 35 kids at East Farm, she says.

“We wanted to keep it close to home and support the community, and not just the kids at the school but also the teachers and staff and everyone working so hard to help these kids who are going to be leaders in the community,” Hull says.

Randall & Hurley has run clothing and shoe drives in the past, and the company currently is collecting school supplies to help refresh teachers’ shelves for the spring. Before the pandemic, employees helped fund and participate in school events such as field days, family movie nights, and STEM nights, during which they ran the Math Bingo table, which was “right up our alley,” Hull says. In the past, they’ve also served as “reading buddies” for kids in the classrooms on a weekly basis.

“These kids don’t know anything about retirement plans, but I think it’s important for them to know they’ve got backing in the community, that it’s not just them,” Hull says.

That consistent ongoing support is a big part of what makes the program so impactful for not only the students but also the adoptive organizations, says Bite2Go’s Stevenson.

“If you’re just writing checks, it’s easier to move on, but when volunteers are going into the schools each week and getting more involved, it becomes more personal to them,” Stevenson says. “In many cases, the meal deliveries are just the first step, because it gives them the chance to listen to the school and wrap their arms around them in other ways.”

Since hunger affects kids not only physically and academically but also psychologically, the adoptive organizations’ steady involvement can yield positive outcomes far beyond the classroom and for years into the future, says Steve Durham, vice president of philanthropy for child hunger programs at Second Harvest.

“Food is literally at the foundation of the pyramid, but it’s also about so much more than food,” Durham says. “Many of these kids face a lot of tumult in their personal lives, and if we can give them one consistently solid piece of security, it can give them tools for life and help elevate them out of their circumstances.”

In addition to buying and storing the food for Bite2Go, Second Harvest also provides the volunteer workforce that assembles the meal kits at its newly renovated Wolff Family Child Hunger Solution Center, located at 402 N. Perry, near Second Harvest’s main warehouse in east Spokane. Roughly 15 volunteers work at a time, assembling as many as 12,000 kits in two days, Durham says. Since the Bite2Go program is run almost entirely by volunteers, all donated funds go directly toward the meal kits. Because of its size, Second Harvest is able to buy high-quality, nutritious, shelf-stable food in bulk at deeply discounted prices, he says.

“Since Second Harvest is a food bank, we make sure everything is on the right side of the expiration date,” Durham says. “We want to give the kids dignity through the type of food we provide, because the last thing you want to do is hurt them by helping them.”

Teachers deliver the meals to students discreetly by either slipping them into their backpacks during breaks or meeting with them privately, Stevenson says. Those meetings create an additional opportunity for teachers to check in with their higher-risk students on a regular basis, he says.

At the high school level, the program is run internally, primarily by student leadership groups that keep track of inventories and distribute the meal kits to teachers after donors have dropped them off at the school. For these student leaders, the program not only helps them develop organizational skills but also raises their awareness about needs among their own peers, he says.

While the Bite2Go program has grown to include nearly all public schools in the Spokane area, organizers always are looking to bring on more individual donors and adoptive organizations, because the need is only increasing, Stevenson says. Currently, 57% of all children in Spokane-area schools qualify for government-subsidized lunches, he says.

“The feedback we receive from teachers is that it’s easy to identify the kids in their schools who need these meals,” he says. “They’re the kids who are not excited about a three-day weekend because they know they’re going to be hungry.”

Groups that can’t sponsor a school by themselves can instead partner with others to adopt a school, Stevenson says. Individual donors also can contribute, whether financially or in other ways such as by delivering meals. Beyond the meal kits, mentoring is the most important thing volunteers in the program can do to help a child, he says.

“What I want for the community to know is that if they have an interest in adopting a school, there are certainly those opportunities, and it’s not only a fabulous opportunity for the kids, but for them,” Stevenson says.

Bite2Go has recently expanded to communities around the region, including Ritzville, Colville, Chelan, and the Tri-Cities. At the Core and Second Harvest plan eventually to reach all 21 counties in Eastern Washington and five counties in North Idaho that Second Harvest Inland Northwest serves, Durham says.

He says an estimated 18,000 children in Second Harvest’s service area still need to be reached with the Bite2Go program.

“Hungry kids are in every community, every neighborhood, every school, and there are many of them,” he says.