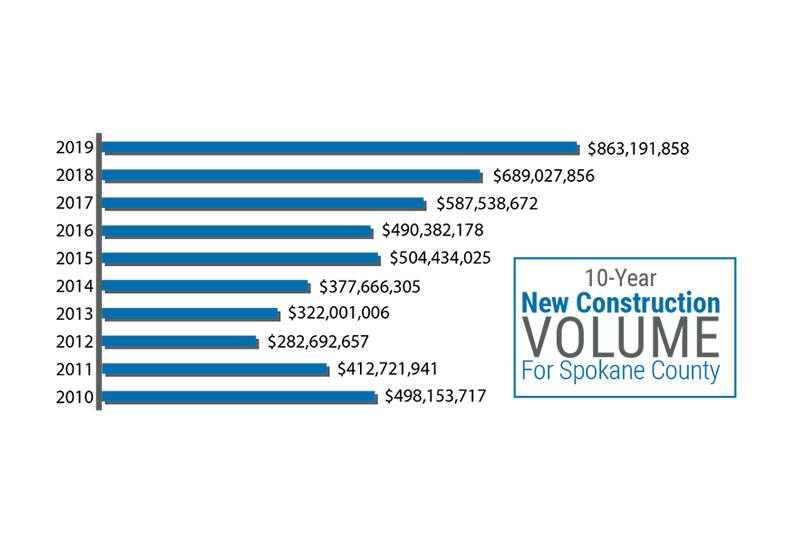 A big surge in new construction last year left the Spokane County Assessor’s Office feeling alarmingly under water in its efforts to process a huge backlog of projects so they could be added to the county’s property tax rolls.

It managed to complete the work, albeit belatedly, averting a scenario that could have left the county’s taxing districts unable to benefit fully from that sharp rise in building activity, says Assessor Tom Konis.

Furthermore, with the county commission-approved hiring of a few new employees as part of the office’s $4.9 million budget for 2019, the office should be better positioned to keep up this year, even if the overall new construction volume matches last year’s pace, he says.

The approved staffing additions “ratcheted down the pressure on the staff quite a bit,” says Konis, a longtime Assessor’s Office employee who took over the department after defeating Leonard Christian in last November’s election.

Some employees in the office were working overtime and taking comp time last year to try to whittle down the new-construction backlog, but they dealt with it well “because they saw the light at the end of the tunnel with more employees coming on,” Konis says. “We could not have maintained that pace all of last year and through this year.”

The added valuations from a total of $880.5 million in new construction applicable to the 2019 tax year--the third highest total on record, trailing only 2007 and 2008--are reflected in statements that the county treasurer’s office began sending out last week. They will translate into additional money for many of the taxing districts, since new construction isn’t factored into their budgets that are used to set the levy rates paid by property owners.

The Assessor’s Office determines the next year’s taxes at the end of each calendar year by calculating the levy rate. At the beginning of a new year, the treasurer’s office certifies the tax roll, mails statements, and collects and distributes property taxes on behalf of the districts, with the taxes totaling more than $600 million annually across 230,000 property parcels.

Michael Baumgartner, county treasurer, said in a press release issued last week that 83 percent of county taxpayers will see a property tax reduction, compared with last year. That’s due partly, he said, to a levy shift passed by the state Legislature in response to the state Supreme Court’s McCleary decision, which found that the state was failing to fund K-12 public education adequately.

Konis says his office currently has nearly 19,000 new construction permits that it will be processing for taxes due next year. A lot of those involve small projects, such as reroofing projects, that don’t create added value pertinent to the tax rolls, but as for the permit total, Konis says, “That’s going to be real similar to last year, which for us was a record year.”

He says his office expects to get revaluation notices to taxpayers this year by June 1, the normally prescribed date, but one that it missed by two months last year and by 3 1/2 months the year before. The normal cut-off date for new construction that is to be added to the tax rolls for the following year is July 31, and notices on parcels affected by new construction are normally to be mailed to property owners in September, he says.

As for property valuation increases that will be reflected in next year’s tax bills, Konis says, “It looks like 9 to 12 percent (will be typical) on the residential side, which is pretty much mirroring what the Spokane Association of Realtors is saying.”

The approved additional Assessor’s Office staffing includes two new residential appraisers and a segregation technician, he says. Segregation techs work in the area of the office that processes requests for changing property lines, such as converting a developer’s 20-acre parcel into 20 one-acre parcels.

The new hires--one of the new appraisers won’t start until April 1--will boost the Assessor’s Office to 46 employees in all, including 15 residential appraisers, seven commercial appraisers, three segregation techs, plus support staff. That’s down from 56 total before the Great Recession, after which the office lost 13 employees.

The commissioners also granted the office some supplemental funding to hire temporary employees to help it work through a four- to five-month backlog in senior citizen and disabled person tax exemption applications, which take a lot of time to process, Konis says.

“We needed their help putting enough pressure on the commissioners to see that we weren’t just screaming fire in a theater down here. We were drowning at the time,” he says.

In a detailed presentation to fire district representatives in September, the Assessor’s Office warned that a lack of sufficient staffing, in addition to jeopardizing some new construction-tax receipts, was making it difficult to provide what should be considered an adequate level of customer service.

It also noted that new construction in the county had risen dramatically since 2012, and said the number of real estate parcels per residential appraiser here--at 14,535 before the latest hires--was the highest among seven surveyed Washington counties and Idaho’s Kootenai County. Konis says that situation will improve somewhat under his slightly enlarged 2019 budget, with the newest staff additions to the Assessor’s Office, but he referred to them as providing him with a “bare minimum” staffing level.

Still, Konis says supplemental budget money should enable his office to whittle down a four-month backlog in segregations, which also had surged as part of the sharp upswing in construction activity. He says his staff is gradually closing in on a state Department of Revenue-prescribed on-time standard of being able to process segregation requests within 30 days of receiving them.

Looking ahead, Konis contends his office still faces a lot of challenges, partly due to eight retirements over the last three years that have left it with an inexperienced staff. He also claims appraiser pay levels are inadequate   to attract and keep new appraisers. He says he’s hoping that a county salary survey now underway, and expected to be completed soon, will provide the impetus for the commissioners to raise those pay levels.

The office has set aside funding for--and hopes to acquire by around August of this year--some promising new digital tablet field devices for appraiser use. The $1,900 iPad-sized devices, which upload information via satellites, have the potential to further improve appraisers’ efficiency, he says.