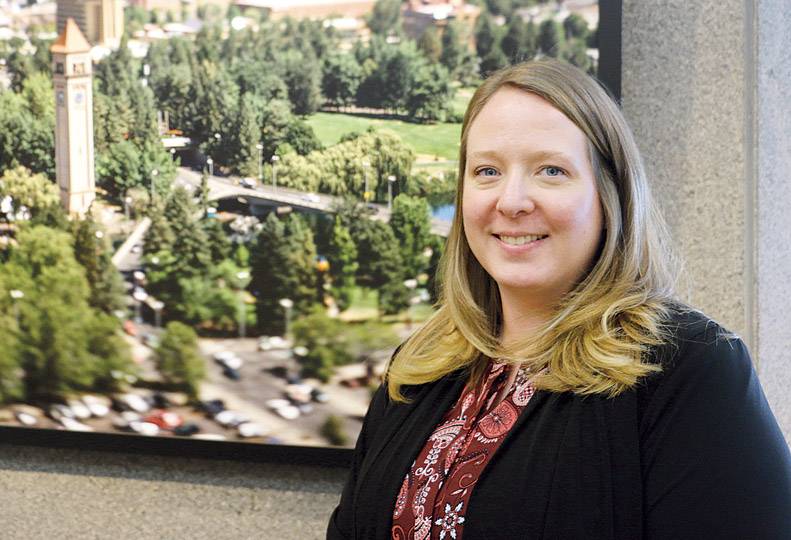 Greater Spokane Incorporated has taken on a big challenge with its new community initiative called Greater Minds that aims to provide working adults with support to return to school.

The program’s goal is to increase the percentage of adult workers in Spokane County with a degree or certificate to 60 percent by 2025.

“Data from the Lumina Foundation currently shows just over 40 percent of adult workers countywide have attained that level of education,” says Meg Lindsay, program director for education and workforce at Greater Spokane Incorporated.

The Lumina Foundation is a private, Indianapolis-based organization whose mission is to promote success in post-secondary education.

The foundation’s A Stronger Nation through Higher Education report showed that nationally, only 40 percent of working-age Americans (ages 25-64) held a two- or four-year college degree in 2013, the most recent year for which data are available.

“In a time when the majority of jobs require a high-quality degree or certificate, that’s a significant issue,” says Lindsay. “In starting this initiative, our percentages here were close to what the Lumina Foundation was seeing nationally, so we aligned our goal with theirs.”

According to the Lumina foundation’s website, it began reporting the attainment rate for associate degrees and higher in 2008, at which point the rate in Washington state stood at 42 percent. By 2014, the most recent year for which data are available, the rate had reached 44.6 percent.

Lindsay says a 2014 U.S. Census Bureau American Community Survey put the number of adults in Spokane County with some college and no degree at 86,000 people, or 27 percent of county residents. That’s slightly higher than the statewide level, which data from the same census puts at 1.16 million people, or 25 percent of Washington’s residents.

But Lindsay says it’s those 86,000 people here in Spokane County that the Greater Minds program aims to focus on.

“We already have programs that help create career pathways for middle school and high school students, but we needed a program with a focus on improving our current workforce,” she says.

Lindsay says Greater Minds will operate as a regional collaboration between three of the Spokane area’s higher education institutions—Community Colleges of Spokane, Eastern Washington University, and Whitworth University—and, for now, six of its larger employers.

Several of those listed also were early investors that donated funding to the initiative, which also receives support from Excelerate Success, Greater Spokane Incorporated, League of Education Voters, and the Spokane Area Workforce Development Council.

Lindsay says the program functions as a kind of interconnected network, first determining the needs of each partnering business’s employees, and then pairing them with education opportunities at participating colleges.

“One of the keys to this program is our neutral navigator Jodi Strote,” says Lindsay. “She is sent to our partner businesses to provide employees with a one-on-one consultation, resources, and support.”

Having previously served as an academic adviser with Eastern Washington University, Strote was hired by GSI to fill the education attainment navigator position this past September.

“In my role as an academic adviser for EWU, I was already assisting a lot of working adults,” says Strote. “I saw this position as an opportunity to make a larger impact in the community.”

“I can then meet with individuals to help them plan a path to completing their degree, providing them resources and contacts along the way,” Strote says.

She says she offers employees a neutral perspective, enabling them to navigate barriers holding them back from completing their education.

“Because I’m a neutral party, employees feel more comfortable talking about things like financial barriers and time constraints,” she says. “I’m there to help them work through those with both their employer and potential school to find the balance that will allow them to complete their degree.”

Because working adults don’t have a lot of extra time to research education opportunities, Strote says she also can help them search for possible scholarships, grants, loans, and other financial aid.

“Some nontraditional students need to familiarize themselves with things like FAFSA (Free Application for Student Aid), and where to look for scholarships,” she says. “There are a surprising amount of scholarships that go unawarded each year simply because no one thought to ask and apply.”

Ultimately, Strote says, the program has many benefits for participating businesses, employees, and higher education institutions.

“Completing their degree gives employees more opportunities to advance in their careers,” she says. “Educating employees helps improve workplace environments and gives businesses a competitive edge, and at the same time, our area education institutions gain more students. These are all things that will benefit our economy and strengthen our community.”

Because the Greater Minds program is new, Lindsay says it’s still in the process of spreading awareness and forming more partnerships.

“As the word grows, I think people will begin to see the value of being a part of this program,” she says. “It takes time for people to gain an education, so it will be a few years before we start noticing progress. But this is lasting work that I believe will have a positive impact here.”

Nancy Norbury-Harter, chief branding officer for Numerica, says the credit union was excited to be a part of the Greater Minds initiative.

“At Numerica, we feel that developing our staff for further success is part of our responsibility as an employer,” she says. “The Greater Minds Initiative fits so well with our philosophy that we wanted to be part of this important initiative that truly can help create a stronger economy for our region.”

Kevin Brockbank, vice-provost of strategic partnerships for the Community Colleges of Spokane, says the program serves as an important new avenue of outreach for educational institutions in particular.

“The program is based on the relationship of an employer wanting to provide education opportunities to their employees,” he says. “With their help, we’re better able to connect with potential students in the workplace, which is otherwise a difficult population for us to reach.”

Brockbank also serves on GSI’s education attainment advisory committee and as part of the guiding team that helped with design and implementation of the Greater Minds initiative.

“Early on, as the program was being developed, GSI surveyed some of the interested employers,” he says. “And the results of that survey showed there were a lot of employees wanting to go back to school. We recognized that opportunity and ran with it.”

Brockbank is referring to an initial education attainment employee pilot survey GSI sent to nine of its member businesses in November of 2015. The survey was meant to gather information on employees’ current education level, post-secondary interests, and the barriers they may face when completing their post-secondary aspirations.

GSI received responses from seven of the nine employers, which provided a base of about 5,900 employees, resulting in about 2,100 responses.

Of those respondents, 741 adults had some college experience or a high-level certificate, but less than a four-year degree. An additional 125 employees had no college or apprenticeship experience. Over half of those surveyed said they wanted to achieve a higher level of post-secondary education, and most understood what it would take to further their education.

Lindsay says the groundwork for Greater Minds began when GSI was named a recipient of the Association of Chamber of Commerce Executives’ 2015-16 Lumina Award for Education Attainment.

Bestowed in August of 2015, the one-time, $40,000 grant is meant to support chambers of commerce in their efforts to grow the number of individuals in their communities with postsecondary degrees and other credentials.

“On a national level, ACCE has been working with chambers of commerce and the Lumina Foundation on education attainment programs,” says Lindsay. “Having secured that grant funding, GSI’s board of directors adopted a similar goal to that of the Lumina Foundation and formed an education attainment advisory group to start looking at how to implement our own employer-led initiative.”

While the program is still in its early stages, Brockbank says the feedback from employers and employees so far has been positive.

“We’re hearing good things, and have high hopes for the program moving forward,” he says.