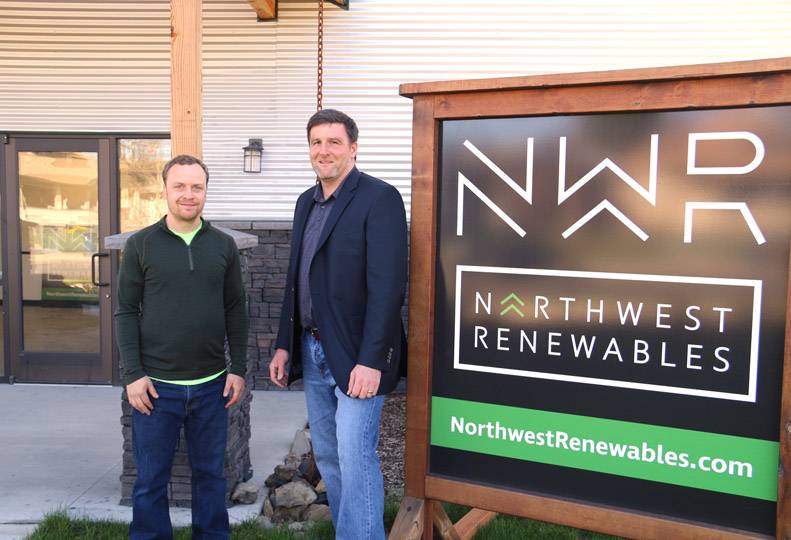 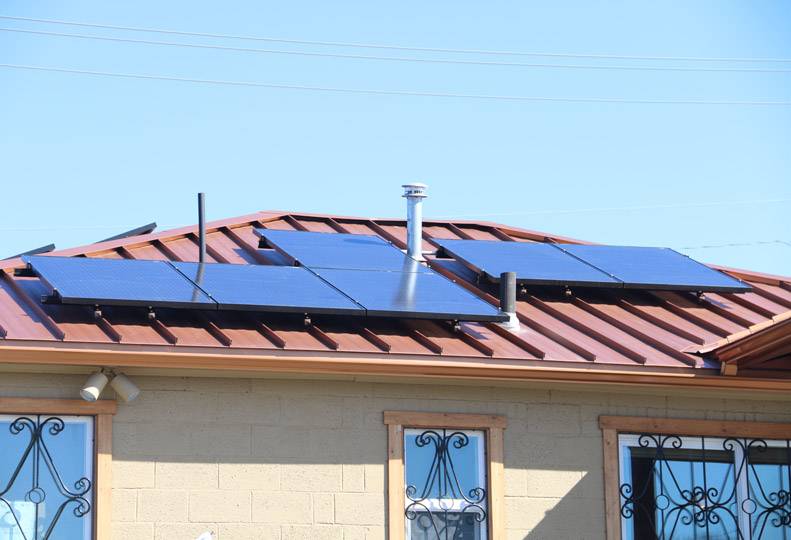 -—Samantha Peone
Commercial installations, such as the one shown above at the Salina Family Chiropractic building in northwest Spokane, typically cost between $2 and $2.70 per watt.

Northwest Renewables sells and installs solar and backup battery and zoned climate control options for residential and commercial structures, says Tenold. The company also works as a full-service electrical and general contractor, so it doesn’t subcontract that work out, which helps control costs, he claims. The business has worked with clients from Moses Lake to Coeur d’Alene, he says.

Heise says Northwest Renewables moved in October into its first commercial location at 2613 W. Eighth, where it occupies about 2,700 square feet of space in a building shared with Heise Electric Inc., an electrical contracting company Heise also owns. Northwest Renewables has four employees and will add a fifth, a marketing position, next month, says Tenold.

Established in 2012, Heise Electric focuses on light industrial and commercial electrical work. It has three full-time employees and had a revenue of $800,000 last year. Its 2018 revenue is projected to be similar or slightly higher, says Heise.

Tenold says Pura Vida High Performance Builders, of which he is owner and general contractor, was founded in 2008 and specializes in energy efficient and passive house construction. The company, which had a revenue of about $2.1 million last year, operates out of offices at 1312 N. Monroe, but will combine soon with another business, which Tenold declines to disclose at this time.

“We just saw it as something that people were wanting more and more of,” he says.

Heise and Tenold spent the first year of Northwest Renewables educating themselves on selling and installing solar panels. Near the beginning of 2017, the company built its website and launched a marketing campaign. Last June, Northwest Renewables hired its first employee, who handled sales calls, says Heise.

“Once we had a web presence and people were able to find us as local solar installers, it just kind of took off,” he says.

Heise says he expects sales to increase, especially within the next two years, due to incentives offered by Washington state.

Tenold says the company prices typical residential installations at less than $3.20 per watt of solar capacity and $2 to $2.70 per watt for a typical commercial installation. For residences, the highest incentive rates through Washington are for systems less than 12,000 kilowatts per hour, but commercial buildings “can go considerably higher than that,” he asserts.

Actual project costs vary depending on factors such as the number of panels installed and the size of the building. Tenold says a residential installation could range from $8,000 to $50,000, and commercial building installations can have a similar range but can shoot significantly higher in some cases.

Tenold claims Washington state’s current solar incentives start with a base return rate of 16 cents per kilowatt and an additional 5 cents per kilowatt when people install solar panels made in Washington. The state plans to roll back those incentives slowly, with the next rate drop on June 30. Idaho exempts solar equipment from sales and property tax, and solar panel owners in Idaho can also be exempt 20 percent of the value of the system from their state income tax as well, asserts Tenold.

Federal incentives also are available. People can qualify for a tax credit of up to 30 percent of the total cost of an installed system, he says.

Because incentives pertain to on-grid systems, most of Northwest Renewables’ clients are on the grid rather than off of it, he says.

He claims Washington state’s solar incentives are beneficial for clients right now, and people can install solar systems that will be paid off within roughly five to seven years.

Heise says state incentives will be cut back gradually, which could have some negative impact on business in the future. Regardless, Heise thinks solar energy will “continue to be a great investment for homeowners and businesses.”

In regard to backup electricity, Heise says the November 2015 windstorm might have sparked higher local demand for batteries to store power.

“When there’s a large disruption in the electrical grid, that makes people nervous, so they’re going to generation: how can (they) create power when there is none?” he says.

The company currently focuses mainly on residential customers, Heise says. Looking forward, however, he projects Northwest Renewables will be working much more with the
commercial sector.