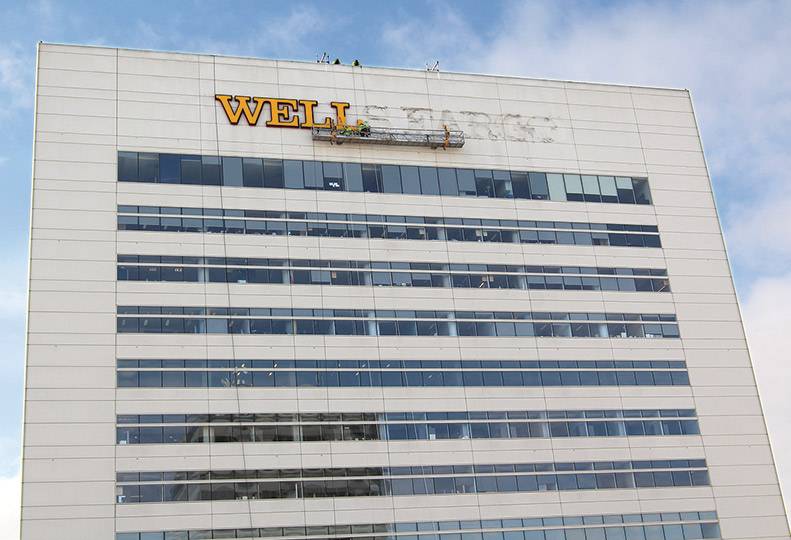 -—Karina Elias
Crews remove the Wells Fargo signage from a building that Washington Trust owns and plans to rename later this year.

According to a fall 2021 market survey compiled by the Spokane Valley office of Valbridge Property Advisors Inc., vacancies in most areas of Spokane County have been on the rise. The total vacancy rate for offices in Spokane County stood at 9.4% in fall 2021, up by about 1.3 percentage points from a year earlier.

The office vacancy rate in Spokane is highest in the central business district, where 17.3% of office spaces are vacant in 70 buildings surveyed with a total of 2.9 million square feet.

“When the pandemic hit, everybody thought the office vacancy rate was going to go sky-high,” Soehren says. “The perception was that the market was really weak. Perception and reality were two different things in 2021.”

Soehren says Spokane County has historically seen vacancy rates of between 14% and 17%, typically hovering near 15%. He estimates that up to 4% of the vacancy rate is comprised of buildings that he characterizes as “less than leasable,” and “functionally obsolete.” A windowless former call center space in the old Crescent department store downtown is one example, Soehren says.

Jon Jeffreys, commercial broker at Spokane-based NAI Black, says he’s noticed big regional and national companies aren’t coming to Spokane at the rate they were prior to the pandemic.

“We’re not seeing as many out-of-market tenants,” Jeffreys says. “We were having a lot of companies come over from Seattle, Portland, Boise, the Bay Area. From what I’ve felt, that’s really started to slow down. It hasn’t stopped.”

As many companies have transitioned their workforce to hybrid or work-from-home models, fewer are willing to pay the costs associated with a larger office space. Many of the companies that have downsized their offices or have vacated offices as they transition to working from home are larger corporate entities.

“Stay Alfred is one example. They shut their doors. The pandemic just ruined their business model,” Soehren says.

Others, such as Irvine, California-based call center operator Alorica Inc. transitioned Spokane-area operations to working from home, he says. “They vacated 40,000 square feet.”

Soehren says the bulk of recent activity in the office space market seems to be in the smaller spaces, those of under 10,000 square feet. He contends it’s the result of a combination of existing local tenants moving into different spaces and some companies establishing a small presence here.

“Since the middle of last year, we’ve been inundated with calls from people looking for small office space,” Soehren says.

Dan Cantu, commercial broker and owner of Cantu Commercial Properties LLC, of Spokane, says a portion of the activity can be attributed to decisions made as a result of the pandemic.

“Of companies I’m seeing moving around, maybe only 10% are doing it because of COVID,” Cantu says. “We’re hoping that’s about where it settles.”

“I’ve signed five leases in the last four months,” Cantu says. “I’ve been losing tenants, too, for various reasons. I’m not sure, at the end of the day, if I’m ahead of the game or not.”

Jeffreys says the current rush for smaller office spaces is a result of companies waiting to see how the COVID pandemic would impact operations.

“For the last two years, it’s been a punting situation, where they’re doing a year lease extension or a two-year extension to wait and see how this whole COVID thing shakes out,” Jeffreys says. “What we’re seeing is some downsizing happening where employers are seeing they don’t need as much space.”

Some companies are trying to cushion their bottom line by moving to a smaller, less expensive office, Soehren says.

“The C-suite is saying, we can save money doing this,” he says.

Other companies are choosing to spend the same amount of money to lease a higher-quality, smaller space. Jeffreys describes the dynamic as a “flight to quality.”

Soehren says he thinks the hybrid model will become a normal part of some companies’ operations, but some will transition back to having staff in the office full-time.

“What we don’t know yet is what effect (working from home) is going to have long term on productivity, corporate culture, those types of things,” Soehren says. “What’s the mental health toll on a worker who never leaves their desk at home? A number of us in the industry think it’s going to boomerang and come back, and companies are going to realize that they maybe overstepped.”

For now, the increased movement in the smaller office space portion of the market means lease prices for those spaces also are rising.

“The rents have been going up pretty dramatically for smaller spaces in the market, because there is such a demand,” Soehren says. “If you’re a 1,000 to 1,500 square footer, you’re seeing 10% and 15% rent increases over where things were two or three years ago.”

Rising construction and remodeling labor and materials costs have been part of the increase in rents, he says.

“It used to be that you could take a space, move some walls, do carpet and paint, and get that done for $15 to $20 a square foot,” Soehren says. “Now, you’re seeing improvement costs anywhere from $50 to $100 a square foot.”

Jeffreys says some commercial office building owners could respond to demand for smaller spaces by creating demising walls, dividers that separate larger offices into smaller spaces. He points to the 260,000-square-foot River View Corporate Center, in Spokane Valley, as an example of a building that can respond to tenants’ size demands.

“If they get a big block of space that comes available, they’re able to cut that building up,” Jeffreys says. “You’re going to see more modification of how these spaces are used. You’re going to see some demising spaces more, if they’re capable of doing so, or just a change of use altogether.”