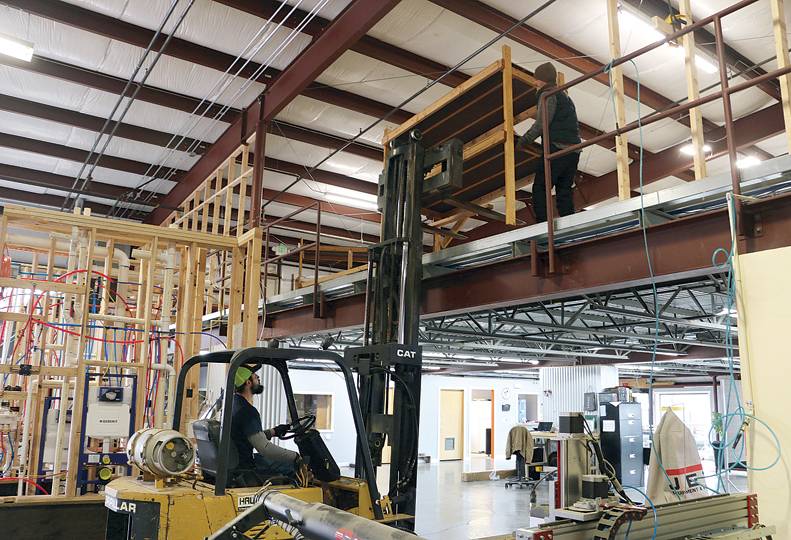 -KEVIN BLOCKER
A Vestis Systems crew works inside the new Toolbox manufacturing incubator space, which is nearly triple the size of the organization’s previous space in Spokane’s University District.

The Toolbox manufacturing incubator, displaced from its original University District space due to pending construction of a new medical school, has found a new home in the nearby Logan Neighborhood.

The Toolbox made a mile-and-a-half jaunt in recent weeks to 213 E. Ermina from 840 E. Spokane Falls Blvd.

The new location is two blocks east of the intersection of Ermina Avenue and Ruby Street, in the building formerly occupied by National Furniture Store Inc., which closed its doors a year ago.

“There’s a lot, and I do mean a lot, of room for new projects,” says Toolbox owner Andy Barrett. “It’s nearly three times larger than the former site.”

Barrett co-owns Vestis Systems Inc. with company president and CEO Dan McGee. The two of them purchased the building for $1 million and have already spent $100,000 in upgrades to it, Barrett says.

The new collaboration and invention space has a total of 17,000 square feet, compared with 6,000 square feet of working space in the former site. Barrett and fellow Spokane businessman Tom Simpson began leasing space at the prior location at the beginning of 2015. The two had been mentoring companies for a few years before that, but 2015 marked the first time the Toolbox had its own dedicated location.

Barrett moved Vestis into the new incubator recently, and company employees are building it out. Vestis makes specially designed commercial awnings and canopies. The company bought out all the assets of the former F.O. Berg in 2013, Barrett says.

Berg announced last month that it had been acquired by HDT Global Inc. Barrett previously served as Berg’s chairman. Post-acquisition, Barret says he’s no longer working in an executive capacity with the former Berg Manufacturing, though he retained shares of the company after HDT’s acquisition.

The Toolbox continues to serve as collaborative space where established companies and business mentors share expertise, ideas, tools, and equipment with manufacturing startup and entrepreneurs.

That effort is overseen by Spokane Create, a nonprofit that manages inventor space at the Toolbox. Barrett says Spokane Create is a place where the general public can go to “tinker.”

“If you’re an inventor, you can come in here for free and use the tools and tap into the resources here to help develop your product,” he says.

Troy Coon, a sales representative for Vestis, has been with the company less than a year. He says the working environment at the Toolbox creates a free-flowing exchange of ideas.

“We have a builder pool of think tank-minded resources,” says Coon.

For now, Vestis and its 10 employees occupy the majority of the 17,000 square feet dedicated to Toolbox, he says.

“We’re still developing this space, but the overall concept is great. Being around different types of companies gives you more exposure to new ideas. We’re always bouncing different ideas off each other. It’s a kind of a, ‘Hey, have you all ever thought about this?’ kind of environment,” Coon says.

Ricky Poon, a Vestis project manager, thinks the increase in manufacturing space will pay dividends in a short time for Vestis.

“We’ll be allowed to be more productive,” says Poon, a six-year company employee. “We’re not even finished putting it together and I love it. This entire space is just more conducive to what we do.”

Also making its home in the new Toolbox is Blockhouse Inc., a Spokane business owned and operated by Barrett and others that’s using cross-laminated timber and other prefabrication products to build smart wall panels to build multifamily housing.

Beyond Barrett’s business interest, he says another company is close to signing a lease at the Toolbox while a few others have expressed early interest, although he declines to disclose their identities.