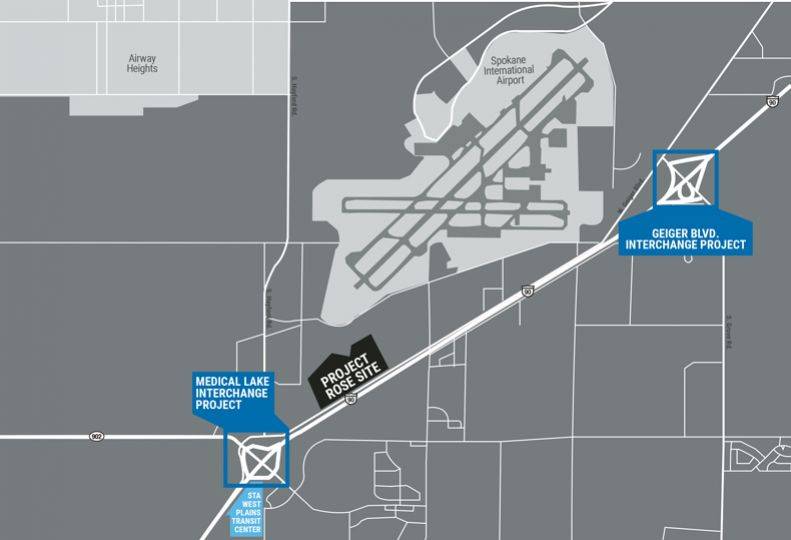 Plans for a presumed Amazon.com Inc. distribution center on the West Plains, currently known as Project Rose Fulfillment Center, are impacting scheduled transportation projects in the works by both the Washington state Department of Transportation and Spokane Transit Authority.

Mark Allen, project engineer with the Washington state Department of Transportation, says the proposed warehouse project has moved up the timeline and changed the scope and order of planned improvements to the Interstate 90-state Route 902 Medical Lake interchange and the I-90-Geiger Field interchange.

Before Project Rose was proposed, the Medical Lake and Geiger Field interchanges were one project, scheduled to go out for bids in October of 2019.

“After Project Rose entered the picture, the project was split, and the decision was made for Medical Lake interchange to go out for bids in March of 2019 to coincide with the construction of Project Rose in 2019,” he says.

Allen says plans for the Medical Lake interchange include new roundabouts at both ramp terminals, a new roundabout at the Geiger Boulevard intersection, widening or replacement of the existing bridge over I-90, ramp improvements, and bicycle/pedestrian improvements along state Route 902.

“The biggest changes we’ve made to each of these projects have been to timelines and adding capacity in the interchanges to handle the additional traffic,” says Allen.

The department has adjusted its construction schedule to focus first on the SR-902 interchange project first, because of its proximity to Project Rose, he says.

“We figured because that interchange will be closer to Project Rose, it would naturally be more attractive for commuter traffic,” he says. “We anticipate the project will also have an impact on the Geiger Field interchange, but we simply felt we didn’t have the resources to tackle both at the same time while meeting that accelerated advertisement date.”

While the department currently still is figuring out just how much additional traffic will be generated by the facility, Allen says Project Rose is expected to have a significant impact on the volume of traffic flowing through the interchange.

“In the forecast year of 2040, the p.m. peak-hour southbound traffic volume (estimate) on SR 902 between the eastbound and westbound ramp intersections, over I-90, has almost doubled due to the traffic volumes generated by Project Rose,” he says.

Allen says the department also has changed the design of the Medical Lake interchange roundabouts, moving them from single-lane to double-lane configurations.

“Before Project Rose, the department may have been able to design single-lane roundabouts to accommodate expected traffic volumes, including potential growth in the area,” he says. “With the addition of Project Rose, it has substantially increased the volume of traffic demand at the Medical Lake interchange, and all of the roundabouts at this interchange will be designed with two lane roundabouts.”

He adds, “We have not designed the Geiger Field interchange yet, so we are not sure what impact the increased volumes will have on the design.”

Because both interchange projects are funded by the state’s Connecting Washington package, which was passed by the Legislature and signed by Gov. Inslee in 2015, Allen says the department is required to complete both using only the original $26.6 million budget estimate.

“Connecting Washington projects are planned to include only those specific line items that have been accounted for in the state’s budget,” he says. “Generally, the Legislature hasn’t been very flexible in providing additional funding outside of what’s been allocated, so we need to stick to what’s been designated.”

While he doesn’t anticipate any funding shortages, Allen says the department has previous experience in adjusting projects to meet limited budgets.

“We’ve encountered situations with some projects where we had to make small concessions in order to stay within budget, such as narrowing road shoulders or shortening passing lanes,” he says. “I don’t believe either of these projects is at that point yet.”

STA spokesman Brandon Rapez-Betty says plans for Project Rose will not impact designs for the West Plains Transit Center, which is currently being constructed along I-90, just southwest of the SR-902/ Medical Lake Interchange, which WSDOT will soon be reconfiguring.

“Design won’t be affected, but what has changed is our timeline, which now has to coincide with WSDOT’s plans for the interchange,” he says.

Rapez-Betty says the West Plains Transit Center currently has an estimated cost of $9.2 million for Phase I and II.

He says construction of the first phase began in July 2017 and includes a park-and-ride lot with 218 parking stalls, three bus bays, and three passenger shelters. He says that phase is expected to be completed in September.

According to Rapez-Betty, once the first phase is completed and open, buses will access the transit center from Arrow Road and Westbow Road, allowing for better service to downtown Cheney and Medical Lake.

However, it isn’t until completion of the second phase, he says, that bus traffic will enter the transit center from the Medical Lake roundabout.

While STA does have a budgeted amount for second-phase construction, Rapez-Betty says it could change slightly depending on WSDOT’s final designs plans for the interchange.

“WSDOT’s plans will determine some of the budget and construction details for Phase II, as well as how we are able to provide service to the Project Rose site,” he says.

Rapez-Betty says STA has committed to providing transit services to the Project Rose facility in 2019, but how buses will access the facility will depend on how WSDOT’s construction plans and timeline.

Rapez-Betty says STA hopes to begin construction of second phase in 2019, in order to be able to serve Project Rose that same year.

“We’ve made a commitment to help the community receive the economic development benefit that facility will provide, so we may have to figure out a way to work around them as they construct,” he says.

He says once WSDOT has completed work on the interchange, STA can also begin planning for its next project, direct service between Airway Heights and Medical Lake via the West Plains Transit Center.

“That project is targeted to happen in 2020 but is also dependent on WSDOT’s improvements to the roundabouts at Exit 272,” he says.

Al French, Spokane County commissioner and member of the West Plains/Airport Area Public Development Authority board, asserts Project Rose’s developers have been impressed with the community’s response to the project.

“As I talked to the client, they are constantly saying we’ve never been in a community that’s been so responsive to a project as we have been in Spokane,” French says.

While Amazon hadn’t attached its name to Project Rose as of press time, site plans are nearly identical to similar fulfillment center Amazon confirmed in May in Oklahoma City.

Plans for the 2.6 million-square-foot Project Rose structure, to be located at 10010 W. Geiger Blvd., continue to proceed at a brisk pace, with the Spokane County Building and Planning Department having issued a grading permit to begin earthwork at the project site last month.

A building permit application filed in early June with the Spokane County Building and Planning Department listed the project value at $181 million. Documents submitted previously indicate the fulfillment center will employ 1,800 to 3,000 people.