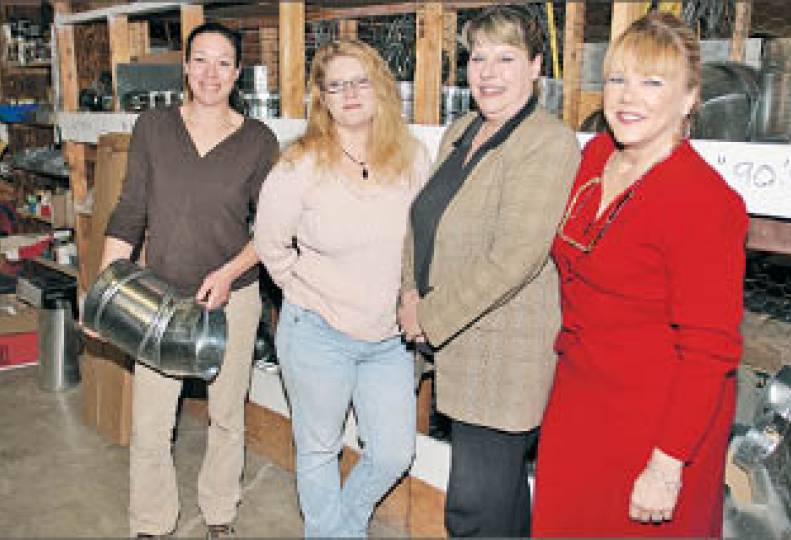 Air Control Heating & Electric Inc., of Spokane Valley, has grown steadily during the last 10 years after selling off noncore parts of the company, including its roofing division, says Max Johnston, the company's president and co-owner.

Johnston says that growth has exceeded his expectations since Air Control scaled back in about 2001, originally planning to focus on service only.

"We've always been a local, Spokane Valley company," he says.

Today, the bulk of the mechanical contractor's work is in installing and retrofitting commercial and residential heating ventilation, and air conditioning (HVAC), and electrical systems, while regular service and maintenance work accounts for only 10 percent to 15 percent of the company's revenues.

Johnston claims Air Control's growth is largely due to the company's reputation, which has been built on the quality of work performed by its employees. Air Control currently employs 27 people, the most since it dropped to fewer than 10 employees a decade ago.

Johnston proudly singles out some of Air Control's top performers who contribute to its reputation, such as the company's general manager, its bookkeeper, a project manager, and an HVAC installer, all of whom, he says, happen to be women in a male-dominated industry.

Although Johnston and Chateaubriand were a couple when she started working part time for the company in 2003, and they later married, it was her contributions to improving the company that led to her executive role in Air Control, Johnston says.

Chateaubriand says she started working at Air Control while studying at Gonzaga University for dual degrees in finance and marketing.

"I needed some summer work and came in and started doing some troubleshooting," she says.

Chateaubriand's background is in the wine industry, "where people are much happier when they call you," she says.

In the heating-and-cooling business, nobody calls to say their furnace is working.

Rose Harrison, a project manager, has been with the company about four years. She previously had worked for one of Air Control's wholesale suppliers.

"This is the better side of the industry for me," Harrison says. "Every day is a new challenge."

She started with Air Control as an estimator for residential HVAC projects, a market segment in which most of the people who receive estimates are women, she says.

Chateaubriand adds, "She could get some customers other estimators couldn't get, and she gets a lot of referrals."

Harrison has moved to the commercial side of estimating, where she also manages projects that she bids successfully.

While she was familiar with products and parts that go into systems installed by Air Control, she says her biggest challenge starting out was to factor additional costs that go into a projects that take as long as five or six months to complete.

"For one job, we were asked to rebid four times," she says. "I'm glad they kept asking. Our company was able to move as they made changes."

In that bid, Air Control won the $400,000 contract to install the HVAC system in the $3.5 million Silver Creek II senior apartments in west Post Falls.

Air Control's bookkeeper, Carol Ehrhart-Avery, has been with the company for a year, having worked on her own and with other construction companies during the last 15 years.

"We were looking for a dedicated bookkeeper, and she's been a good fit for us," Chateaubriand says of Ehrhart-Avery. "Her experience with construction-industry clients was a huge benefit to us. Any time you're dealing with state prevailing wages or Davis-Bacon (federal prevailing) wages, there's a tremendous amount of paperwork."

Gina Bronchetti, one of Air Control's 17 HVAC installers, was referred to the company earlier this year by the Northwest HVAC/R Association & Training Center, of Spokane, after she excelled in a nine-month training course there, Chateaubriand says. Bronchetti, a former roofer, says she wasn't as well received as a roofer with another company as she has been as in installer at Air Control.

Chateaubriand says Air Control has tripled the size of its installation team since June.

"We had a slug of work come in," she says. "The whole summer was busy."

The HVAC industry is susceptible to a lull in September, which often falls between heating and cooling seasons, but Air Control didn't see that happen this year, she says.

"We had an Indian summer and we were able to keep busy and we kept everybody we hired in the summer," she says. "We try to hire in view of long term as much as possible."

About 65 percent of the company's HVAC and electrical installation work is in the commercial market. Most commercial HVAC jobs are between $50,000 and $100,000 in scope. Commercial clients generally are repeat customers or come to Air Control through referrals, Johnston says.

"We don't spend a lot of time bidding jobs at the plan center," he says.

Within the commercial market, the company has established a niche in handling mechanical projects for the manufacturing sector, Johnston says.

For example, one manufacturer had a product that wasn't coming out dry enough. "We developed a system to help finish drying," he says. "It had nothing to do with comfort heating and cooling."

Air Control is one of few companies in the Inland Northwest that handles ultra-low temperature refrigeration systems, which mostly are used in research settings such as universities, Johnston says.

While most of its work is in Spokane County, Air Control's service area ranges from Nespelem in Central Washington to Missoula, Mont., he says.

Johnston, who still estimates projects and manages them on occasion, says he mostly prefers to act in a consulting role.

"It's always enjoyable when somebody asks me to look at a job," he says.

Most consulting has to do with retrofitting systems that are outmoded or inadequate, often to accommodate a change in use of a building, he says.

"The trick is being able to figure out what they can reuse to achieve the desired results," he says, adding, "About 70 percent of all new HVAC units go into retrofit projects."

Residential work is vital to the company's business model, even though it's typically smaller in scale than commercial work, Johnston says. "We've picked up commercial customers based on the quality of work we do in their homes and vice versa," he says.

Chateaubriand adds, "Business owners have homes. You don't know who out there has a business that may need work on their heating and cooling systems."

"When we had more divisions, that didn't help with profitability," Johnston says, adding that Air Control has regrown its commercial-installation operations at a deliberate pace. "Right now, I think we don't want to be much bigger than we are, but everything is subject to change," he says.

Chateaubriand says that whatever direction the company takes, it can't be content to sit still for too long.

Even though several competitors dropped by the wayside due to the economic downturn, the mechanical-system industry remains as competitive as ever—if not more so, Chateaubriand says.

"Companies at all levels are being creative and trying to increase market share," she says.