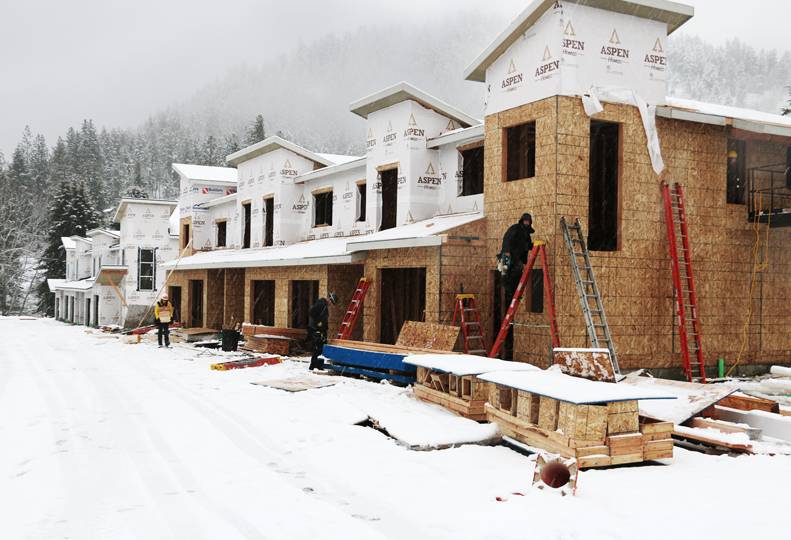 For the first time in its 20-plus years in business, Coeur d’Alene-based Aspen Homes & Development LLC soon will add custom-design apartment complex to its portfolio of work.

Aspen Homes is constructing Latitude 20 — four buildings with five units each – southeast of the intersection of Best Avenue and 15th Street, about 2.5 miles northeast of downtown Coeur d’Alene.

The project has a construction value of $3 million and is expected to be completed in the spring.

The complex is being built on approximately 1.5-acres of land. D’Zign Group LLC of Hayden, Idaho is the project architect, says Todd Stam, who owns Aspen Homes & Development.

Of the new multifamily complex, Stam says, “We want to create something people don’t want to move out of. We haven’t tried anything like this before. We want to build something a little nicer than the standard (apartment) complex.”

Seeking to provide each of the 20 units with the “Aspen feel,” each apartment will feature wood trim, a fireplace, and granite countertops in the kitchen and bathrooms, says Stam.

Each two-level unit will have nearly 1,200 square feet of living space. Two bedrooms and two bathrooms will be located upstairs, with a half bathroom, kitchen, and living area in the lower level. Each apartment also will have its own garage for parking, he says.

Though still under discussion with his management team, monthly rent could run between $1,300 to $1,400 month, according to Stam.

“The goal is to make a custom residence that’s not crazy expensive,” he says.

Stam says the company began having discussions about such a project a few years ago. Aspen Homes acquired the property in a land trade with a former client, he says.

“As housing prices began to climb, we thought there’d be a demand for this type of a complex,” Stam says. “You’re literally 60 seconds from Interstate 90 and can reach Post Falls and downtown Spokane in a short period. And it’s a short drive from downtown Coeur d’Alene.”

In addition to Latitude 20, Aspen builds single-family homes at several new-home developments in Kootenai County, including Fox Hollow and The Falls at Hayden Lake.