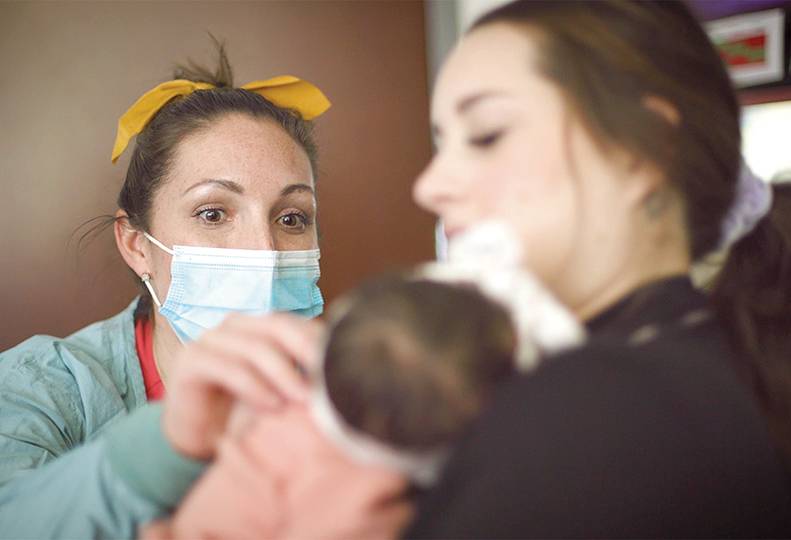 Deanna Higgins, nurse manager for the Family Maternity Center, says TeamBirth is a model developed by Boston-based Ariadne Labs as part of its Delivery Decisions Initiative to improve communication and birth outcomes.

Providence paid about $20,000 to bring the pilot program to Holy Family Hospital and to Providence Sacred Heart Medical Center, says Ariana Lake, communications manager for Providence. A grant from Providence Inland Northwest Foundation covered part of the cost of training.

Higgins notes that when she and her team underwent training, she saw how it could help the center’s staff communicate more and provide better care.

“Once we went through the training, we saw that it’s helping us improve our care we give to our patients,” she says.

A key component of TeamBirth is the implementation of whiteboards installed in each labor and delivery room on which care plans are posted as they’re developed by the care team in collaboration with the patient for both the newborn and the expectant mother.

Higgins says that before TeamBirth, there was a lot of “telephone tag”— both figuratively and literally— between patients, nurses, and physicians. Nurses are usually the first ones to speak to the expectant mother in the early stages of labor and ask critical questions, she explains. The physician later would arrive and make an assessment about the situation and delegate certain tasks to the nurse without knowing a patient’s wishes, such as whether the mother wants labor to be induced.

“Typically, women patients feel (resigned to) what the physician wants to do, so they say OK,” explains Higgins.

With TeamBirth, the telephone tag is eliminated, she says. When a question arises, the first step is to call for a “huddle” with the expectant mother, her partner, a nurse, and the physician.

Higgins says TeamBirth adds no cost to the patient, and the new approach saves time for nurses and physicians.

TeamBirth is designed to prevent trauma and birth PTSD that is often reported, by improving communication and “decreasing the mourning of a birth story not being what the patient wanted,” Higgins says.

“There are many stories about birth trauma and birth PTSD,” says Higgins.

In emergency situations when a patient needs immediate life saving measures, the care team will still take decisive action to do everything possible to care for the patient and child, explains Higgins. However, in some situations that do not need immediate action, or have come under control and therefore created a window of time to consider alternative solutions, the care team will huddle and inform the patient about what is going on with their delivery and what the care team thinks it should do, she says.

In a recent delivery, for example, the team initially determined that an expected mother would need to have a cesarean section birth, in which a baby is delivered surgically through incisions in the mother’s abdomen and uterus. When the patient was informed, she declined and said she would rather wait it out.

“Of course, that is scary for us,” explains Higgins. “Typically, before (TeamBirth) we would tell the patient we need to do this C-Section, which made the patient feel unempowered.”

For example, the center recently saw a transgender couple that was awaiting the birth of their second child. They say they’d had a bad experience with their first birth at a different health care facility, says Higgins. The care team was able to have an open conversation about the couple who wished to be referred to with the pronouns he and they, and the team asked how they wished to refer to their new baby as well.

“It just took the elephant out of the room and made it so much more comfortable for everybody,” says Higgins.

Other opportunities to practice inclusivity and cultural sensitivity and awareness include working with Native Americans who often wish to have sage burning during child labor, and people from the Marshall Islands who sometimes want the entire family involved in the birth experience.

TeamBirth has been implemented in over 28 hospitals across the country. Shortly after Holy Family adopted the approach, the Birth Place at Providence Sacred Heart Medical Center also implemented it. Higgins says there are 10 Providence hospitals on the pilot program, with plans to expand it.