New device touted to be comfortable for patients, frees up larger machines 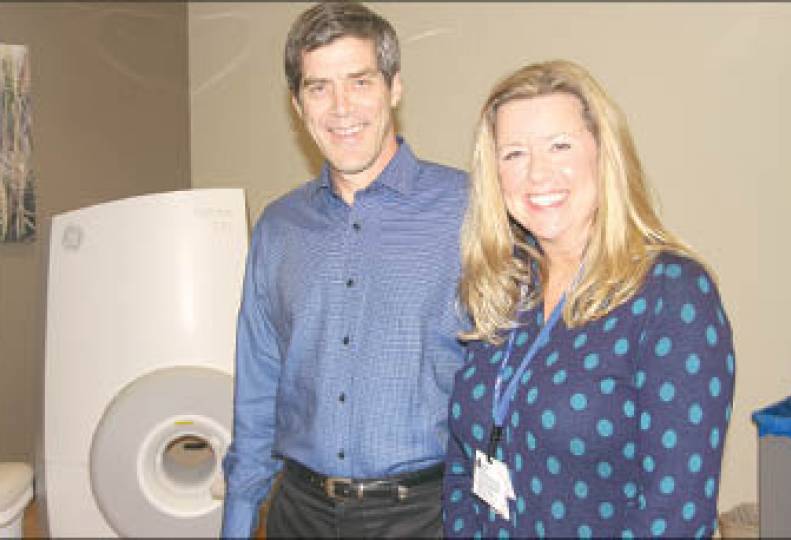 Installed last month at the company's imaging center in Providence Holy Family Hospital, at 5715 N. Lidgerwood on Spokane's North Side, the imaging device is the first of its kind that Inland Imaging has had installed.

Jennifer Brown, Inland Imaging's coordinator of MRI services, says it's the second such machine that she's aware of being used in Washington state—the other is in a Puyallup, Wash., imaging center, she says.

Inland Imaging, which employs a total of 350 people, won't hire additional employees to staff the new machine, but eight employees will work shifts on it, she says.

Inland Imaging radiologist Dr. Bill Schulte says the machine, which is a General Electric Optima MR430, cost about $500,000, substantially less than the whole-body MRIs, which generally are priced at between $1.2 million and $1.8 million.

Schulte says the smaller MRI can be used to scan part of a patient's arm from the elbow down to the fingertips and any part of a person's leg from the knee down. For such a scan, which takes 30 to 45 minutes to perform, a patient sits in a chair similar in design to those used in dental-examination rooms and has the extremity placed in the machine.

For those who only need images of an extremity, the smaller MRI can be more comfortable than a whole-body scanner, Schulte says. In a larger MRI, he says, a patient who needs a wrist scanned, for example, must lie prostrate with the arm to be scanned held overhead, as if holding a freestyle-swimming pose.

The machine also makes MRI imaging a more viable option for people who get claustrophobic in the larger machines. In some cases, Schulte says, claustrophobic patients need to be sedated before going into a whole-body scan.

Others simply refuse to undergo that sort of imaging, he says. For such patients, Inland Imaging can abate those fears with the new machine while making the needed images.

"You get the best of both worlds," Schulte says.

Brown says Inland Imaging typically conducts between 30 and 40 MRI examinations a day at Holy Family, and the extremity MRI is being used for eight to 10 appointments a day, which frees up availability of the two whole-body MRI machines that Inland Imaging has at Holy Family.

Schulte says Inland Imaging's center at Holy Family is the busiest of its seven imaging centers and is the only one that handles both hospital inpatient scanning and outpatient services.

"We need more capacity here," he says. "This gave us that much more flexibility."

Smaller MRI machines similar to the new one installed at Holy Family have been used in the industry for years, Schulte says. In the past, however, the images generated with the smaller machines have been inferior to those made using the whole-body devices, he says.

An MRI device is gauged by its magnet's power, which is measured in tesla. The extremity MRI has a 1.5 tesla rating, which is the same power as the whole-body devices that Inland Imaging uses at the center. In the past, the smaller devices had a 0.3 tesla rating.

Brown says Inland Imaging currently doesn't have any plans to add extremity MRIs at any of its other centers.

In addition to its location at Holy Family, Inland Imaging operates imaging centers at 220 E. Rowan, also on the North Side; in the Sacred Heart Doctors Building, at 105 W. Eighth; on the lower South Hill, at 525 S. Cowley; in Spokane Valley, at 12420 E. Mission; and in Liberty Lake, at 1334 N. Whitman. The company also operates the Manito Mammography Center, at 1923 S. Grand Blvd.

The organization recently closed an imaging center in Deer Park.

With their merging, the new company will have 97 radiologists and 20 non-physician staff members, creating what they claim will be one of the largest radiology practices in the western United States.

Each group will retain its local brand identities, and Inland Imaging LLC will continue its imaging center operations under the direction of CEO Steve Duvoisin.