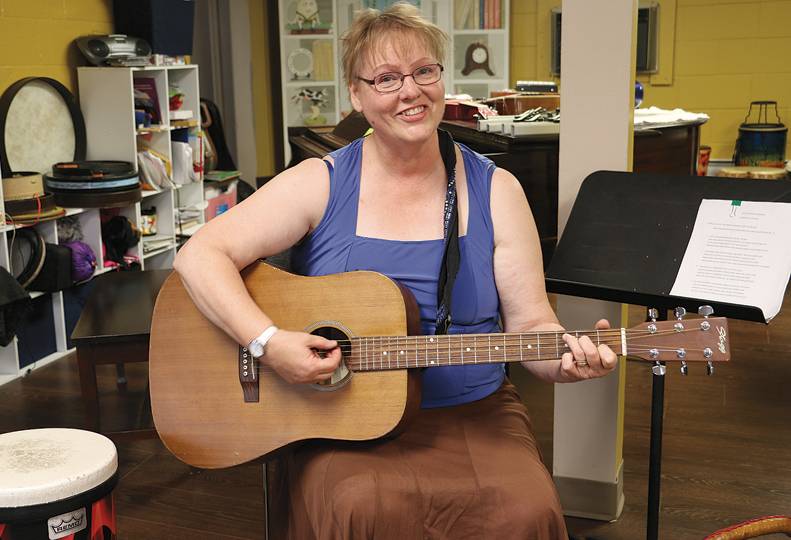 -Virginia Thomas
Carla Carnegie, of Willow Song Music Therapy Center, says the vast majority of her clients are elderly memory-care patients who suffer from Alzheimer’s disease and other forms of dementia.

“They were seeing their lovely residents come to life,” Ruggles says.

The assisted-living center is one of a handful in the Spokane area that have hired Carla Carnegie, board certified music therapist and owner of Willow Song Music Therapy Center, located in Otis Orchards.

Carnegie says between 60 and 80 of her roughly 100 clients are elderly memory-care patients. The rest are children and adults who have autism spectrum disorders, developmental disabilities, or neurodegenerative disorders, such as Parkinson’s disease.

According to nonprofit organization Spokane Gives, about 10,000 people in Spokane have been diagnosed with Alzheimer’s disease.

Carnegie says music therapy can provide a range of benefits for the elderly and help mitigate some of the effects of memory loss due to dementia and Alzheimer’s disease.

Music therapy is a type of expressive arts therapy in which a music therapist uses various musical instruments and techniques to engage a patient, sometimes inviting patients to play instruments or sing along.

She claims that music therapy has been shown to increase function in areas of cognition, memory, focus, and physical ability.

Because the human brain is attracted to patterns, Carnegie says rhythm is an especially important part of music therapy for clients with memory loss.

“Rhythm and the brain are so integral,” Carnegie says. “Even my far-advanced Alzheimer’s clients, amazingly, can have rhythm—and do. I’ll start a beat, and they fall into it, because our brain just loves rhythm. It’s a means of syncing up and organizing the brain.”

Carnegie has many methods for engaging memory-loss clients in music therapy, ranging from drumming to playing an autoharp to singing along with songs older clients recognize from their youth, such as “Home on the Range” or “You Are My Sunshine.”

“As the disease progresses, it tends to take them further and further back in their life,” Carnegie says. “They can’t remember their kid’s name or their face, and so many of their memories are gone, but they can still engage in music because it’s a global brain activity.”

In the course of obtaining her music therapy degree from Marylhurst University, in Portland, Carnegie says she learned that music therapy can help with cognitive function because it stimulates growth of new neuron pathways around damaged areas and solidifies existing neuronal pathways, Carnegie says.

“When you’ve got a neurologic disorder or a trauma to the brain, music is a wonderful vehicle to use as a means of rehabilitation and creating new neuronal connections so you can have some of your life back,” Carnegie says. “But none of this happens in one or two goes. It’s a repetitive thing, because you’re building new neuronal connections. If you sing that song and then you come back next week and you’re singing it again, you’re solidifying one of those memories.”

Carnegie says she’s witnessed the difference music therapy can make for clients who have difficulty speaking. One client who had suffered a stroke in addition to dementia could say nothing more than a nonsense word when Carnegie first met her.

“I was struggling to figure out what songs would be special for her that she would join in,” Carnegie says.

“She sang every word of that song. Every word,” Carnegie says. “Before, she couldn’t say the word she wanted. Here she was singing the entire song. She was so happy.”

“With Alzheimer’s, the world becomes very small,” Carnegie says. “They might sit all day and not even notice people walking by.”

When a group of clients sits in a circle and plays music, however, Carnegie says they begin to perk up and take notice of their surroundings. She recalls one client who rarely spoke, but who loved to sing and drum. One day, she watched as he noticed that a woman across the drum circle from him wasn’t drumming.

“He got up out of his chair, took his drum to her, set the drum in her lap, took her hand, and helped her to drum,” Carnegie says. “He had this lovely, intimate interaction with one of his peers. He may have never noticed that lady before that.”

Ruggles says the socializing effects of music therapy in residents who had participated were noticeable long after the mid-July session ended.

“At lunch and at dinner, they were all chatting about it and connecting beyond that hour that Carla was there,” Ruggles says. “The conversation was about how it triggered memories. Not only were they talking about how much fun playing in the drum circle was, they were talking about these songs that they hadn’t heard in years.”

Some assisted living and memory care facilities use Music & Memory programs, which are modeled after a nonprofit of the same name.

“That can be lovely, especially if it’s music that they really love and enjoy,” Carnegie says. “But there’s a lot more to (music therapy) than that.”

She says music therapists know how to use music to bring about the maximum effect by designing music experiences to help create change and improve clients’ areas of function.

“We’re assessing, and out of that assessment we develop treatment plans, just like other health professionals do,” she says.

“It’s going to be more and more of a marketing tool,” she says.

There are currently four board certified music therapists in the Spokane area, including Carnegie. She says she hopes to add a second music therapist to Willow Song soon.