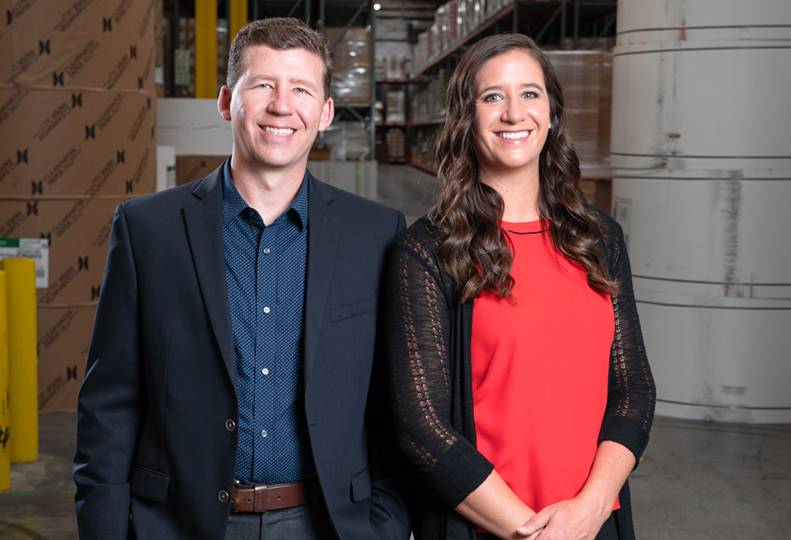 “I think the most difficult thing in the last five years, that we’ve seen in our folding carton market, is the purchase of companies like ours that are being bought out by other giant conglomerates,” Sonderen says.

She adds, “It seems like every couple of months somebody else was selling … the independent side is pretty rare these days.”

The company, which manufacturers custom paperboard packaging for grocery stores, pharmacies, hospitals, and distribution centers, is a member of the Independent Carton Group, an association of independently owned and operated folding carton companies that offers educational and networking programs to members.

Out of 20 members in the association, Sonderen Packaging is the only company located in the Pacific Northwest. The association connects paperboard manufacturers to discuss best practices, host training seminars, and provides a safety net for members, Sonderen says.

In the event of a natural disaster, member companies step up and assist other companies with production, she says.

Paper manufacturers have experienced significant gains since the pandemic began, according to reports from multiple news outlets. The Journal reported in early April that Spokane-based Clearwater Paper Corp., Sonderen Packaging’s biggest supplier, had seen a significant boost in demand.

Sonderen Packaging is no exception, and has seen sales increases during the coronavirus outbreak, Sonderen says. About 76% of the company’s customers are in the grocery industry, which saw an increased demand for products when consumers began purchasing in bulk as the pandemic started.

“Not to say that we want to capitalize on any pandemics, but at the end of it, it is a good thing for some businesses and has been detrimental to others,” she says. “In our world, it’s been nice to be busy again and keep the head count steady.”

Sonderen declines to disclose current revenue, although she says the company has seen sales increase 16% since 2014.

The typical lead time for the company is about four weeks, Sonderen says, but one of the company’s 15 primary printing machines is currently offline and being repaired. That has slowed the lead time to between five and six weeks, she says, but she expects to return to four weeks lead time in the next few weeks as the downed machine is repaired and demand evens out.

The company, which occupies about 130,000 square feet of manufacturing space at 2906 N. Crestline, currently has 127 employees.

“Right now, things are going well,” she says. “We do have some customer attrition that we have been expecting, but that hasn’t happened yet. Our sales team has been working hard to make sure we can backfill that business.”

In the wake of the pandemic and increased test tube shipping needs, the company has begun marketing an EcoRack, a lightweight carton specimen rack that the company originally developed for a customer who later didn’t need the product.

Sonderen Packaging, which typically doesn’t market products directly to businesses, decided to try its hand at it to see if it could gain traction in the pathology industry and expand its customer base, Sonderen says.

Now, the company is looking at fine-tuning its printing department operations and quality, she says, and has made changes to its metrics to gather more data.

She adds, “I would like to open up some capacity for new customers as well.”

Despite the company’s current success, Sonderen says it hasn’t come without challenges.

The company has seen significant turnover in its management team over the last few years as employees have retired or explored opportunities in new industries, Sonderen says.

Sonderen Packaging also saw a staggering sales drop last July, which forced the company to trim overhead costs and lay off about 10 employees, she says.

Sonderen says leading up to the slowdown, the company had seen a long stretch of increased demand that led to long lead times and made it difficult to gain new customers, ultimately ending in a decline in sales for the company in mid-2019.

To protect employees during the outbreak, the company, which operates shifts around the clock, added an hour break between the day and night shift to allow for cleaning before shifts start, says Sonderen. The manufacturing process for the company’s products doesn’t require employees to be in close quarters, she adds, so the company has been able to maintain social distancing between employees.

Friends and family members of employees also sewed masks for the company’s employees, says Sonderen. While employees aren’t required to wear them on the manufacturing floor, the company does recommend that employees wear them while working. She contends the extra steps have worked to ease employee anxiety.

“It’s challenging with the pandemic to make sure everybody feels safe and secure while they’re working because we all are taking a risk by being here,” says Sonderen.

She says the company has been working to maintain the company’s family-oriented culture by offering free lunches to employees and taking song requests to play over the sound system.

The company also has started making its own sanitizer, she adds, and has established a COVID-19 response team and protocols for responding if an employee tests positive with coronavirus.

Sonderen Packaging also has been donating packing boxes to local nonprofits for use in packing and shipping items and recently donated cases to Second Harvest and donated five pallets of boxes to The Zone Project, a community initiative to promote health, safety, wellness, education, and housing security in Northeast Spokane, Sonderen adds. The company also participates in Second Harvest’s Bite-2-Go program at Rogers High School that provides weekend food supplies to students in need during the school year.

“We’re very passionate about taking care of our own,” she says. “When looking at philanthropic areas or causes to support, we first look at how we can impact our own community that we work with and live with.”

Sonderen adds, “We’re always looking for those ways we can support and be more involved.”

The company was founded in 1963 by Al Sonderen, Sonderen’s grandfather.

About seven years ago, Sonderen and her brother, Matt, began transitioning into leadership roles with the company, taking over from their father, Mark Sonderen.