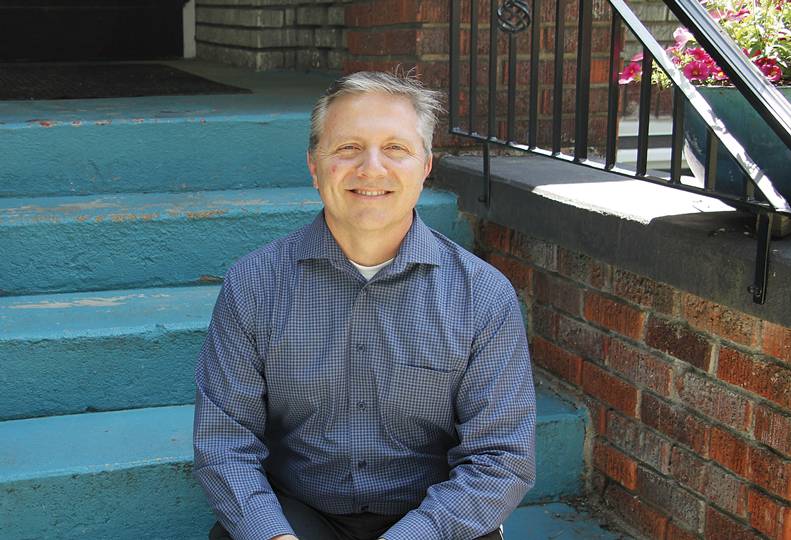 -NATASHA NELLIS
Architect James Cortner says the fi rm, based in Browne’s Addition, can trace its roots back to the early 1920s.

Tucked away in a white-brick house with a bright blue porch in Browne’s Addition is Cortner Architectural Co., a longtime Spokane architecture company that traces its roots back to the early 1920s.

The firm has been growing its client base steadily and had been on track to have a record-setting revenue year before the pandemic hit, says company owner and principal James Cortner.

Currently, Cortner says the company is getting ready to send a $9 million Eastern State Hospital project out to bid to replace the building housing the hospital’s boiler equipment. The company also is working on a project for the Community Colleges of Spokane to remove an old running track on the Spokane Community College campus and replace it with a parking lot, he says.

The company does anywhere between 12 and 20 projects a year, Cortner says. Most of the work comes from repeat clients, such as the Washington state Department of Transportation, for which the firm currently is working on roughly $2.5 million in impact studies for parts of the ongoing North Spokane Corridor project.

The firm has a 30-plus year history with the state DOT, tracing all the way back to when Division Street was split to include Ruby Street in 1994, Cortner adds.

Cortner says the firm averages somewhere from six to 12 clients a year, with an annual revenue ranging between $500,000 and $1 million.

At the start of the year, Cortner says the firm was on track to have a record-setting year revenue-wise because of some new clients it brought on and the addition of new projects to its roster.

“I feel like it was someone taking their foot off the accelerator,” he says. “Our business slowed, but it was kind of a nice reprieve for us because it allowed us to get caught up.”

The firm never experienced a full stop, which he attributes to the federal stimulus keeping things moving, he adds.

Now, Cortner says he expects to have a flat year, as he expects to see capital improvement budgets shrink because of the pandemic. The company hasn’t seen any work drop-off at this point, he says, but he expects that is because the effects of responses to the coronavirus have yet to trickle down to his firm.

That likely won’t happen until the fourth quarter of this year, if it does happen, he says.

Cortner Architectural Co. is located at 1903 W. Third, on the southwest corner of Third Avenue and Elm Street, near the Rosauers supermarket.

The firm currently has six employees. Cortner Architectural Co. is licensed to work in Washington and Idaho, and most of its work comes from east of the Cascade Mountains, Cortner says.

“We like the small size because we feel that we can provide a really good hand on principal involvement to our clients,” he contends, adding that the small size of the firm allows it to be involved at every level of the project, from conception down to construction completion.

Some of the company’s recent projects include the rental car facility and the snow removal facility at the Spokane International Airport, as well as the Salvation Army facilities located at 222 E. Indiana in Spokane, Cortner says.

Before the early 80s, the company was focused on education projects, but that shifted around 1982 when Cortner’s father, Raymond Cortner, purchased the company from longtime Spokane architect Arthur J. “Jack” Sackville-West Jr., with whom he had worked, Cortner says.

“Back in the early 80s, when my dad started getting into the business, it was a whole different economy,” he says. “Interest rates were high, bonds and levies weren’t being passed, so we ended up diversifying and unfortunately got out of (K-12) schools.”

Sackville-West purchased the firm from George Rasque, who originally founded the firm in the early 1920s, Cortner says.

“You could say I’m the fourth, in a sense, generation of architects in Spokane,” says Cortner. “We’ve been here for 95 years, and we plan on being here for hopefully a long time.”

Cortner was born and raised in Spokane. He attended Gonzaga Preparatory School before earning his engineering degree at Vanderbilt University. Cortner says he worked in Texas for several years before returning to Spokane in 2000 and partnering with his father in the company.

“I grew up doing (architecture),” he says. “I really like problem solving. That’s the nice thing about architecture. Just when you think you know it, you find out there’s new products out on the market, new ways of doing things.”

Cortner says some new techniques and technologies revolve around building envelopes, thermal conductivity, and other sustainability practices. The firm has taken a more conservative approach to adopting these new technologies, he adds.

“We tend to believe in using technology that is tried and true,” he says. “We don’t mind being on the cutting edge, we just don’t want to be on the bleeding edge. We tend to wait for newer things on the market to prove themselves.”

Looking forward, Cortner says he would like to see the firm’s associates get licensed and eventually become partners in the company and to see the company grow to take on more clients.