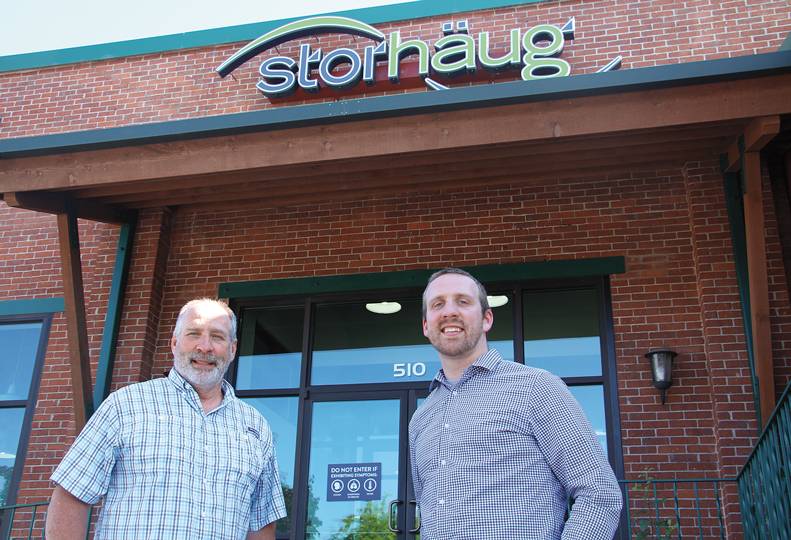 -KEVIN BLOCKER
Jerry Storhäug, left, and his son, Austin, say they never planned to do what they’re doing today with the family-run engineering company, but it’s working out well.

Jerry Storhäug, cofounder and principal of the Spokane civil engineering company Storhäug Engineering Inc., started his own business in 1993 because he wanted fewer managerial duties and wanted to interact more closely with clients.

His son, Austin Storhäug, now a part of his management team, once said he never wanted to work for his father’s business.

Today, the two men are doing what they thought they wouldn’t, and they say they couldn’t be more pleased with how things have turned out.

Before founding the company, Jerry Storhäug was working as a consultant for another Spokane engineering firm, acting in more of a managerial capacity, he says.

“As a manager, it felt like there was a little bit of one degree of separation, sometimes two,” he says.

Subsequently, how–ever, as Storhäug Engineering has grown in size and expanded on its services through the years, he has drifted back to a managerial role, Storhäug says.

“It seems a little contradictory,” he says laughing. “But the ultimate goal was to have more control in providing a quality job for people and listening to what they want.”

Storhäug Engineering has completed a wide range of projects through the years across the Pacific Northwest that’s included corporate and office buildings and parks, government and military facilities, municipal and public works projects, and residential development, Storhäug says.

The company currently has projects underway at the new Hope House shelter, being built on downtown Spokane’s west end at 1301 W. Third, and at the 400 and 500 blocks of west Sinto Avenue where Community Frameworks, a nonprofit low-income housing provider, plans to build a 43-unit Sinto Commons residential complex.

Total project cost for Hope House is an estimated $15 million project, while Sinto Commons is expected to run a total of $6.6 million.

Storhäug says the firm’s range of work varies from projects as small as neighborhood coffee to full-size retail malls.

In a discipline of engineering that deals with the construction, design, and maintenance of physical and natural environments, the fortunes and downturns of civil engineers typically mimic those of the construction industry, he says.

“We really do follow the construction sector in terms of economy,” Jerry Storhäug says. “We saw things growing up until the 2008-2010 recession.”

Business dropped off then before roaring back within the last few years, he says.

“Last year was probably one of our stronger years,” he says, though declining to disclose Storhäug Engineering’s annual revenue.

Storhäug says the company will have a favorable 2020 but doesn’t anticipate reaching the volume of revenue it brought in last year.

Project work has slowed in part due to the fact Spokane County hasn’t held public hearings for proposed developments of projects and properties in the effort to shield the public from potential exposure to the virus, Storhäug says.

“Any projects that were moving forward in this time frame are kind of stuck right now,” he says.

Recently, however, a few other municipalities where Storhäug Engineering is doing work have moved public hearings online, in hopes of enabling more proposed projects to move forward.

Storhäug Engineering is located at 510 E. Third east of downtown Spokane. The company moved to that location in 2004 from its initial Spokane Valley location, he says.

Storhäug, who has a bachelor’s degree in civil engineering from North Dakota State University, says the company’s services include landscape architecture, land-use planning, and land surveying, in addition to civil engineering.

“They’re kind of four different areas of expertise, but they really work well together for our typical clientele,” he says.

Depending on seasonal work, Storhäug Engineering’s employee roster can range from 15 to 22 workers, he says.

Storhäug says it was his goal to create a true family business.

Austin Storhäug says he somewhat unexpectedly joined the company in 2010 after he completed his bachelor’s degree in civil engineering from Washington State University.

“I did a lot of work here over the summers going back to high school in 2006,” he says. He completed summer internships at the company in 2008 and 2009 before securing full-time employment.

“It was something I said I’d never do, but I haven’t looked back since,” he says. “The idea of coming right out of the gate and working for my dad was something that wasn’t too appealing.”

However, with the economy still feeling the effects of the Great Recession, and the company able to secure a series of projects about the time he graduated, his planned summer job of 2010 never stopped, he says.

As he dares to peer into the future, Austin Storhäug says he thinks Spokane’s civil engineering sector may be poised to withstand the presence of COVID-19 for the foreseeable future.

“I’m seeing a lot of people moving into inner-coastal cities like Spokane from San Francisco and Seattle because of a lower cost of living and reduced traffic,” he says. “That generates more housing, more retail ... so, I think there’s really kind of an opportunity for places like Spokane to see a little bit of a boom.”