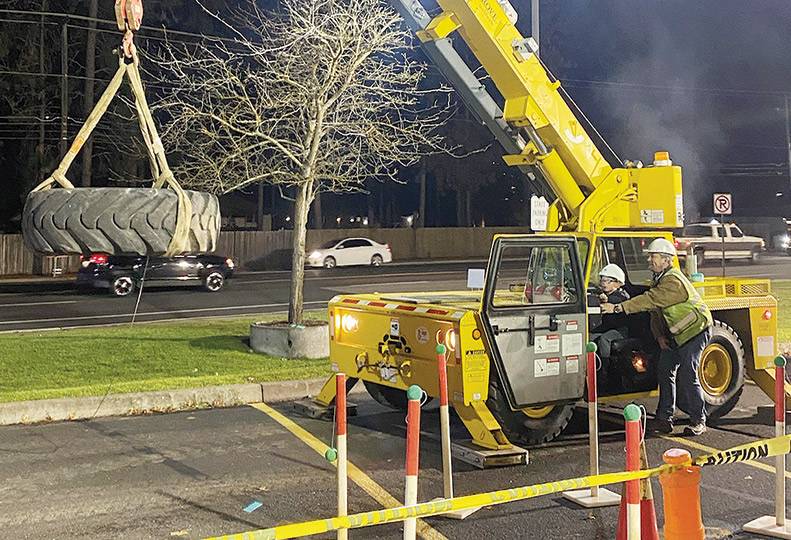 -—Associated Builders & Contractors
A student learns how to use a crane at last year’s Trades Night, which was held at Mead High School.

Construction industry leaders are working to promote a career in the construction industry as equal to entering college, the military, or the general workforce, says Sarah Cottam, vice president of member services for the Spokane-based Inland Pacific Chapter of Associated Builders & Contractors Inc.

In an ongoing effort to change the narrative that construction jobs represent dead-end work for uneducated people, ABC has partnered with Mead School District for the second year to host Trades Night to highlight opportunities for good-paying careers in skilled trades in the construction industry, Cottam says.

The free community event will feature industry professionals, with vendors bringing power tools, operational equipment, and other tools of the trades so that community members of all ages can have a firsthand interactive experience, she says.

“We don’t care if you are a 3-year-old who just wants to play with a mini excavator, or high schooler, or in your 40s, 50s, or 60s and want a career change,” says Cottam.

In its first year, the fair hosted over 600 guests and had roughly 60 vendors distributed within the halls of the high school, while vendors with larger equipment set up shop in the school’s parking lot.

“We had 160 people show up as vendors and volunteers and a total of 840 people altogether. That tells you, obviously, there is a need,” says Cottam.

A report by the association released in February found the construction industry faces a workforce shortage of 650,000 this year. A separate report from the Association of General Contractors of America and Autodesk released in September 2021 found that 89% of contractors reported having a hard time finding craft workers.

Cottam says pressure is also felt in the Spokane area where the industry is struggling to hire enough workers for ongoing projects.

“Usually, when someone thinks of construction, they think shovel, electrician, or welder,” says Cottam “There is so much more to this industry and that’s another reason we are trying to get out to the high schools.”

The idea for Trades Night came about after the association’s annual workforce development breakfast last year, when Cottam met with Doug Edmonson, director of career and technical education for Mead School District, to discuss how they could get more young people involved in the skilled trades.

They envisioned a quick, intense, hands-on, interactive, community-driven event would be the best way to bring students, instructors, and contractors together.

Cottam says that Mead School District also supports the idea of changing the trades narrative and that partnering with a school is an important component, because it demonstrates to the community a positive view of the skilled trades.

While she says it’s difficult to pinpoint why a career in the trades hasn’t had greater appeal, she lists two factors she believes have played roles in declining interest in the trades. First, she says the industry hasn’t done a good job of promoting careers in the last 30 years, and the second is the widespread perspective that construction work isn’t a strong career path.

“My mom’s generation saw construction as a hard, dead-end job,” Cottam says. “We were told, if you’re going to be anybody, you need to go to college.”

In 2018, the Office of the Washington State Auditor echoed this sentiment in a report that found that “good jobs in the skilled trades are going begging because students are almost universally being steered to bachelor’s degrees.”

In addition, the report also recommended that kids begin learning about the skilled trades as early as seventh grade.

Cottam concurs and says the association is aware of the seventh-grade rule. ABC goes to elementary schools and middle schools to conduct one-on-one workshops and sessions. However, because of the worker shortage, many contractors are too busy to dedicate time to educating youth.

“There is so much work in this industry right now that contractors don’t have time to go into the schools to promote it, compared to colleges that have whole teams of people to help recruit for their schools,” says Cottam.

“Honestly, had I known about an apprenticeship program when I was in high school, I would probably be an electrician today,” says Cottam.