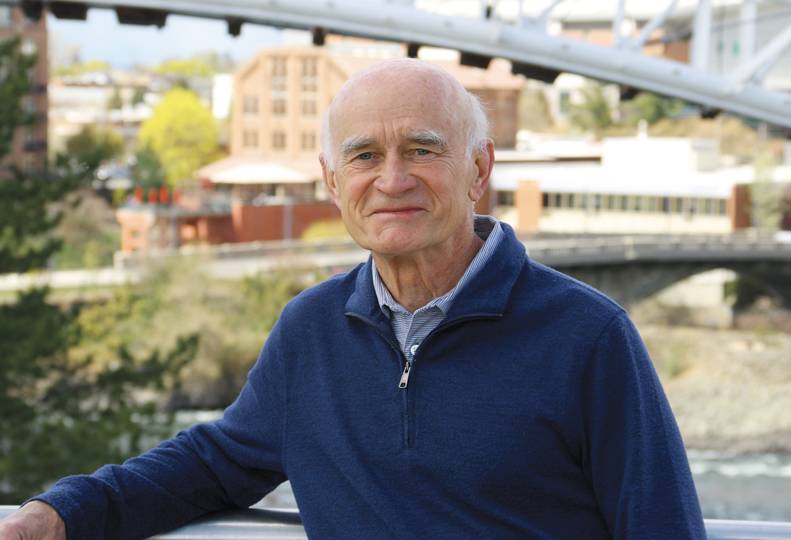 -KEVIN BLOCKER
Rich Hadley became the CEO and president of the Spokane Regional Chamber of Commerce in 1993 and led the organization, which became Greater Spokane Incorporated, for 21 years.

As Rich Hadley and his wife of 50 years, Rita, got closer to their downtown Spokane destination from their home in Colbert, she began grumbling about the increase in vehicle traffic.

Without missing a beat, Rich replied, “It’s that damn chamber’s fault for doing its job so well,” before he burst into laughter.

Hadley, now 74, served as CEO and president of Greater Spokane Incorporated, formerly the Spokane Regional Chamber of Commerce, from 1993 until 2014, when he retired. He is viewed by no shortage in Spokane’s business community as someone whose imprint will last for generations to come.

Says Kris Johnson, president of the Association of Washington Business, “Nothing big has happened in the Spokane region that doesn’t have his fingerprints on it.”

Tom Johnson, past president-elect of GSI and the retired CEO and president of STCU, says Hadley spearheaded ideas that ultimately turned into realities.

“And these were all job-creating projects that will help grow Spokane for decades to come,” he says.

For his part, Hadley always has and still deflects any praise that comes his way.

“These aren’t my accomplishments,” Hadley says. “They’re our accomplishments. In a chamber, it’s the staff, the board, the volunteer committees, and civic officials.”

Hadley has left his indelible mark in other communities and regions where he’s worked. However, Spokane and the Inland Northwest had him longer than any other stop as he and Rita ultimately decided to call the Lilac City home.

Early in his tenure here, Hadley recalls a city official sharing with him that he thought Spokane had an identity problem.

“We don’t think we’re good enough,’’ Hadley says, quoting that official. “And he thought that clearly affected where we were as a city.”

The predecessor to River Park Square was looking “very shabby.” Seattle-based Nordstrom Inc. was ready to leave downtown Spokane. The Davenport Hotel was closed, “and there really wasn’t much going on,” he says.

Spokane felt like St. Paul, Minnesota, to Hadley, who had served as that city chamber’s chair, president, and CEO before arriving here. Both cities suffered from inferiority complexes to their big neighbors to the west. In the case of St. Paul, its sister city Minneapolis is on the other side of the Mississippi River. For Spokane, it was its cross-state big brother Seattle.

“I’ll tell you what changed everything here: private investment locally,” he says. “The Cowles Co. decided they had to build a new mall, and Walt Worthy, who had been very successful in real estate, bought The Davenport Hotel inexpensively and refurbished it.”

Still, the idea of a medical school in Spokane wasn’t something that anyone was talking about yet.

“Our largest single industry is health care,” Hadley says. “If we didn’t succeed in supporting the different fields—nursing, pharmacy – we were going to have employers here recruiting from beyond and that gets more expensive.”

In her Icons nomination letter of Hadley, Addy Hatch, the director of outreach and communications at WSU’s College of Nursing in Spokane, writes: “Perhaps his biggest accomplishment was coalescing the community around the vision for a medical school in Spokane.”

Hatch says Hadley fought for each additional year of instruction under the Washington, Wyoming, Alaska, Montana, and Idaho medical school system and navigated the complex relationships as WSU and the University of Washington cemented their separate medical school plans in Eastern Washington.

A farm boy from Fredericksburg, Iowa, Hadley graduated from Iowa State University with a bachelor’s in government and international affairs in 1968. The following year, he was drafted into the Army to serve in the Vietnam War.

“I never expected to be in the military after college,” Hadley says. “When the Army drafted me, I thought, ‘Well, they don’t fly airplanes.’ I checked it out, and the Navy was very interested in me.”

In 1969, he enlisted and went to officer candidate school at a U.S. Naval Air Station in Pensacola, Florida, and learned to be a crewman aboard aircraft before later transitioning to Naval air intelligence, he says.

Hadley and Rita were married and had their first son two months before his full-time Naval service ended, and he became a Navy reservist. The first job he landed was at an ACE hardware store in Frisco, Colorado, an hour west of Denver.

Later, Hadley and a co-worker decided they wanted to go into business for themselves and moved their families to Fond du Lac, Wisconsin, an hour north of Milwaukee, to open a sporting goods store.

“We concluded that we had a lot of good ideas but didn’t know what we were doing well enough to succeed,” he says.

Hadley learned then his strengths rested in helping others succeed, he says.

They moved to Minneapolis. Rita was a teacher, and Rich went to work in the cosmetics section of a department store.

But in that time, he met a fellow reservist who had a job with the Iowa City, Iowa, Chamber of Commerce. He encouraged Hadley to explore what the Twin Cities had to offer.

It led to his hiring in 1975 as the assistant manager of the chamber of commerce in the resort town of Fergus Falls, Minnesota,  2 1/2 hours northwest of Minneapolis. That was followed by stints at chambers in Kalispell, Montana, and Boulder, Colorado.

He then accepted a similar position in St. Paul, Minnesota, where he worked at the St. Paul Area Chamber of Commerce from 1986 to 1993.

Upon arriving in St. Paul, he found that community often struggled to find its identity in the shadow of Minneapolis.

“We created an eight-county Metro East Development Partnership,” he says. “It was pretty amazing to pull that off, but with Minneapolis being next door it made it easier because we wanted to be competitive.”

By the end of 1993, Hadley was being recruited by chambers in Denver and Spokane. The couple were expecting again, 14 years following the birth of their first son, and decided Spokane would be more conducive for their family.

“We love Spokane, and I loved my job ... all 21 years,” he says. “I believe in Spokane and believe Spokane will continue to do great things because there are great people here.”