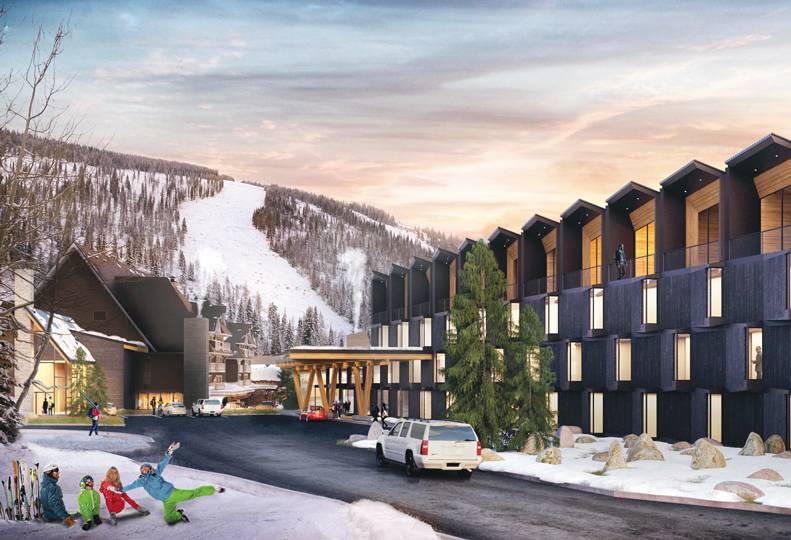 -Skylab Architecture
This $35 million boutique hotel is slated to be constructed at Schweitzer Mountain Resort, near Sandpoint. It’s scheduled to open in the fall of 2021 now.

The owner of Schweitzer Mountain Resort envisions about $85 million worth of enhancements at the North Idaho ski resort over the next decade, executives there say.

The planned work follows $9.5 million in chairlift work and new-run development completed on the ski hill near Sandpoint last year and includes a previously announced, $35 million boutique hotel. Foundation work has started but the construction timetable has been pushed back, due to early-season snow last September and premature closure due to coronavirus in March.

Schweitzer CEO Tom Chasse says the resort, which Seattle-based McCaw Investment Group owns, has flexibility with its timetable—and management will take as much time as necessary to make sure projects are done right—but he expects work to be completed over the next five to 10 years.

The largest part of the envisioned improvements involves a $50 million project, called Mid-Mountain.

“Mid-Mountain will be a dedicated day-skier area catered more for beginners and intermediate skiers,” Chasse says. “The new construction calls for additional runs, more parking, and a facility for a ski school and ski rental.”

Resort expansion is more than justified based on annual attendance increases at the resort, he says.

The new chairlifts and ski runs debuted to skiers this past season in the form of two new high-speed lifts and the opening of seven new ski runs on the backside of the resort, he says.

Construction of the new hotel was supposed to be completed in time for the 2020-21 ski season, but Schweitzer has pushed that back a year.

Spokane-based Walker Construction Inc. is the general contractor for the hotel, and Skylab Architecture, of Portland, Oregon, designed it. The hotel will feature a high-end restaurant, bar, and retail spaces. The occupants of those spaces have yet to be determined, he says.

Says Dig Chrismer, Schweitzer’s marketing manager, “There were a variety of things that have thrown us some challenges we weren’t quite expecting. So, we’ve decided to just slow down the construction schedule a little bit and take our time getting what we can get done.”

Chasse and Chrismer say the region’s population growth primarily has fueled the annual attendance increase at the resort.

In October 2017, Schweitzer officials commissioned a site study and solicited the opinions of other ski resort industry experts to help determine Schweitzer’s immediate and future needs. The end result was the decision to make changes incrementally, they say.

Chrismer says she’s most excited about the Mid-Mountain concept.

“We realize that on weekends and holidays some of our infrastructure gets squeezed. This is our plan to address that,” she says.

“Being privately owned ... it makes it very easy for us to make strategic plans and implement them a lot quicker,” Chrismer says. “We don’t have the red tape to go through the way a lot of other resorts have to with (U.S.) Forest Service land. If we want to do something, we go through a standard (Bonner County) permitting process.”

During the resort’s peak season, ranging from Christmas to the end of February, Schweitzer employs an annual average of 600 workers. The resort’s offseason is from the end of April to the end of June. Upon re-opening for the summer season at the start of July, Schweitzer typically employs roughly 200 people. She says the resort has between 80 to 100 full-time, year-round employees.

“It was an interesting year. December started a little bit slow for us in terms of heavy snowfall,” she says. “But then January was amazing in terms of conditions and visitation. We had some really strong weekends and had a wonderful January and February.”

Closing for the season was a tough choice to make, she says.

“There was a recommendation for people to keep active and be outdoors while maintaining social distancing,” she says. “But the reality was that it was too big of a risk for the safety of our employees and community. It was a hard decision but the right decision.”

Chasse says the resort’s board of directors and executive team are comfortable with the future growth plans they’ve outlined.

“Schweitzer’s goal isn’t to grow to become a 500,000-skier type of resort,” he says. “We’re growing organically with the growth in Spokane, Coeur d’Alene, and Sandpoint.”