Warehouse to employ over 700 when open 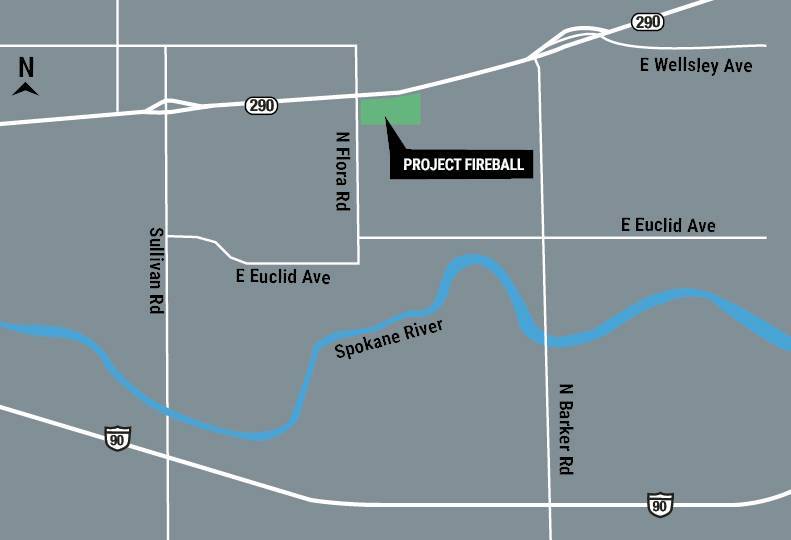 Updates to the massive facility being constructed in Spokane Valley show more markers of an Amazon project, which if true puts the e-commerce giant in the running to become one of Spokane County’s largest employers.

In total, the proposed 1.3 million-square-foot facility planned at 18007 E. Garland in Spokane Valley, which comes with a $105 million price tag, is expected to boast over 700 employees, according to planning documents filed with the city of Spokane Valley.

Anne Laughlin Carpita, spokeswoman for Seattle-based Amazon.com Inc., declines to comment on whether the massive facility will be an Amazon project.

Thus far, grading and foundation permits have been issued for the project. Building permit applications for construction of the warehouse shell and tenant improvements are under review by the city of Spokane Valley.

The city also voted in late October to vacate a recently reconstructed portion of Garland Avenue, which cuts right through the 100-plus acre development site. That project to remove the roadway has been applied for and was under review by the city when the Journal went to press.

The project is being developed on a 70-acre plot owned by Spokane-based Centennial Properties Inc., east of North Flora Road and just south of East Trent Avenue. Between the grading, foundation, and shell building permits, the project has an estimated construction value exceeding $105 million, with site improvements and the foundation totaling $3.6 million, and the warehouse shell and tenant improvements totaling $101.6 million.

The single-story building will have a footprint of about 1.1 million square feet and will include a roughly 250,000-square-foot mezzanine level, planning documents show.

The development, characterized as Project Fireball-GEG2, has some of the characteristics consistent with other Amazon facilities.

If Project Fireball is indeed an Amazon facility, that, plus the planned Delivery Station speculated to be an Amazon project in the works on north Division Street, could bring the company’s employment numbers to 4,100 in Spokane County.

In mid-August, a pre-development application was filed with the city of Spokane for a $15 million overhaul to a 116,000-square-foot former retail center at 6902 N. Division, labeled as a “Delivery Station.” The project matches the size and scope of a typical Amazon Delivery Station, which serves as the last mile stop between fulfillment centers and customers but hasn’t been confirmed as an Amazon project.

Amazon listed a job opening for a Station Area Manager in Spokane in September, which is described as “responsible for the day-today-operations of an Amazon Delivery Station.”

In August, the company reported having hired over 2,600 employees at its Geiger Boulevard facility, dubbed GEG1, with intent to build its employee base at the fulfillment center to about 3,000.

If Amazon ramps up to those employment levels, only Fairchild Air Force Base, with 5,935 employees as of Nov. 1, 2019, Washington state, with 5,715 Spokane-area employees, and Providence Health Care, with 5,466 employees, would have larger workforces here than the online retailer.

Jeff Kleingartner, public information officer with the city of Spokane Valley and spokesman for the city Economic Development board, declines to comment on the project and its expected economic impact on the city.

In Washington state, Amazon has invested over $98.8 billion between 2010 and 2019 in infrastructure and employee compensation, according to data provided by the company.

Over 74,000 full-time and part-time jobs have been created in the state, while 228,000-plus indirect jobs were created in that 10-year span, according to the company.

In total, over $87.7 billion has been added to Washington’s gross domestic product as a result of Amazon investments, the company reports.

Project Fireball’s developer is listed as Irvine, California-based Panattoni, which has an office in Seattle. Panattoni has developed several Amazon fulfillment centers, according to the company website. It is also the developer behind the $130 million, four-story, 650,000-square-foot fulfillment center, totaling 2.6 million square feet, currently under construction in Nampa, Idaho, which is expected to employ at least 2,000 workers.

A trip generation analysis by Gibson Traffic Consultants Inc. describes the Project Fireball facility as a nonsort fulfillment center. Such a center is described on Amazon’s website as a facility where associates pick, pack, and ship bulky items, such as patio furniture, outdoor equipment, or rugs.

A representative of Goodyear didn’t respond to requests for comment.

The permit applicant is Portland-based design company Mackenzie, which also has offices in Seattle and Vancouver, Washington. Mackenzie company is also the architect listed on the project.

A representative of Clayco declines to comment on the project. Project Fireball is expected to be completed by fall 2021, according to planning documents.

Planning documents also show Project Fireball will include 1,000 parking stalls, 401 trailer stalls, and 100 loading docks. A hydrogen tank is to be installed on the site. Hydrogen is typically used as a cost effective and energy efficient way to power heavy equipment in warehouse settings.

In 2017, Amazon agreed to buy $70 million in fuel-cells and hydrogen technology from Plug Power Inc. to power forklifts and other industrial equipment at 11 fulfillment centers.

Project Fireball is also the same size as a $150 million fulfillment center in University Park, Illinois, which the Chicago Tribune confirmed earlier this year would be an Amazon facility that would create at least 800 jobs.